Buckingham families gets their hats on for Brain Tumour Research! 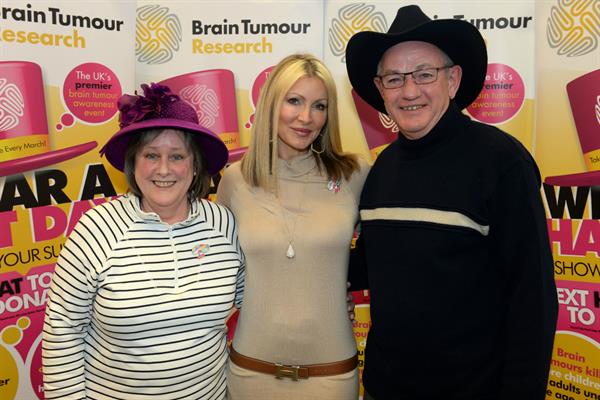 Two families, who both live on the Badger’s Estate in Buckingham and have been affected by brain tumours, have helped to launch a national fundraising campaign to find a cure for the disease.

Emma Shudell, aged 40, along with Jayne Hilsdon, 56, are working with the national charity Brain Tumour Research  to support this year’s Wear A Hat Day which takes place on Thursday 29th March.

Along with her husband, Phil, and children Finley, seven, and Niamh, two, Emma, who was diagnosed with a brain tumour in March last year, met businesswoman, model and brain tumour survivor, Caprice Bourret at the charity’s HQ in Milton Keynes to launch the campaign on Saturday 3rd March.

Emma, underwent an awake craniotomy at the John Radcliffe in December last year in which surgeons only managed to remove very little of the tumour, although enough for a biopsy. She has been told she has a slow-growing astrocytoma brain tumour and is on three-monthly scans.

Jayne, and her husband Tim, inspired by their son Oli, 26, a brain tumour patient, are also supporting Brain Tumour Research, and came to the launch of the Wear A Hat Day campaign.

Having been diagnosed with an aggressive and incurable brain tumour in 2014, for which he had surgery, chemotherapy, radiotheraphy and immunotherapy treatment, Oli was given the devastating news recently that his tumour had reoccurred. He underwent further surgery last month and is now undergoing chemotherapy whilst trying to raise £230,000 for a cancer vaccine not available through the NHS.

Caprice underwent surgery to remove a low-grade brain tumour which was diagnosed a year ago and continues to be monitored by her medical team. Launching Wear A Hat Day 2018, she said: “I have been so touched by Emma and Oli’s stories and the incredible work their families are doing fundraising for Brain Tumour Research. It is a sad fact that brain tumours affect so many people and that this devastating disease is indiscriminate and can affect anyone at any age – I never even used to get headaches before I was diagnosed.

“I am proud to be working with Emma and Jayne and their families and so many others to support Wear A Hat Day. I want everyone to get involved! It’s such a fun event and anyone can take part. Let’s all put our hats on and do something positive for Oli and Emma and support the fantastic research going on right now. I am determined to try to make a difference for the 16,000 people diagnosed with a brain tumour each year.

Emma said: “I am literally only now just starting to accept that I have a brain tumour. I thought it would be a case of “let’s get it out and then you can get on with your life!” Now I have to learn to live with having a brain tumour and the effects it has on me, which range from exhaustion to balance issues, as well as, on bad days, difficulties with communication and memory.”

Jayne commented: “Like Emma and her family, we are dedicated to continuing to raise awareness of brain tumours and are really proud of the thousands Oli has raised so far for Brain Tumour Research. We have had such wonderful support from people in and around Buckingham and I hope they will once again join us by getting involved in Wear A Hat Day.”