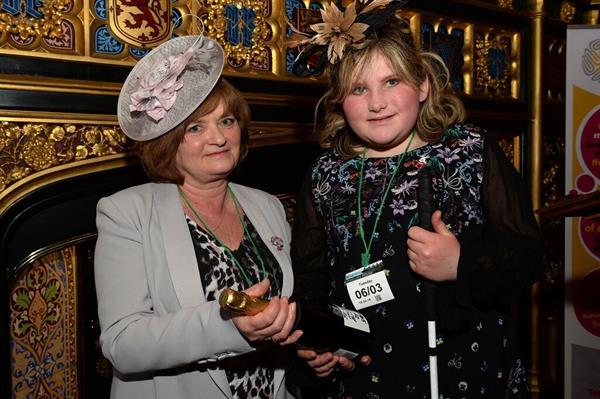 A Devon teenager whose life has been changed forever by a brain tumour was at Westminster for the launch of a new Inquiry into the economic and social impacts of the disease.

Charlotte Reid, who celebrated her 18th birthday just two days earlier was presented with a bottle of champagne by Sue Farrington Smith, Chief Executive of the national charity Brain Tumour Research. She joined other patients, families, campaigners, and charity workers at the invitation of the Rt Hon John Bercow MP, Speaker of the House of Commons and a Patron of the charity.

Charlotte, who travelled from her home in Sidmouth with parents Angela and Steve, was among the first to be invited to submit their evidence on a web forum facilitated by the charity. Just three when she started suffering from headaches, Charlotte wasn’t diagnosed until three years ago and subsequent treatment to halt the growth of the rare craniopharyngioma has left her with complications including poor eyesight and problems with her memory.

The teenager, who was hospitalised by a virus during the first week of January and then suffered a seizure, said: “Being invited to the House of Commons is so exciting and something I never thought I would do. It’s the icing on the cake after my birthday celebrations and it’s really good to meet other people who have been affected by brain tumours.”

In a nod to Wear A Hat Day, the fundraising campaign which takes place on Thursday 29th March, Caprice and other celebrity supporters including TV presenter Sarah Beeny, TV’s Instant Gardener Danny Clarke, and celebrated milliner Noel Stewart, Charlotte and her family donned their favourite headwear for a photo call.

Sue Farrington Smith, Chief Executive of Brain Tumour Research, said: "Brain tumours have been a neglected form of cancer for decades, killing more children and adults under the age of 40 than any other cancer. This Inquiry will shine a light on the social and economic impacts of brain tumours adding weight to our arguments and landing a huge urgency to our call for further funding to improve patient outcomes and offer much-needed hope to people like Charlotte and her family.