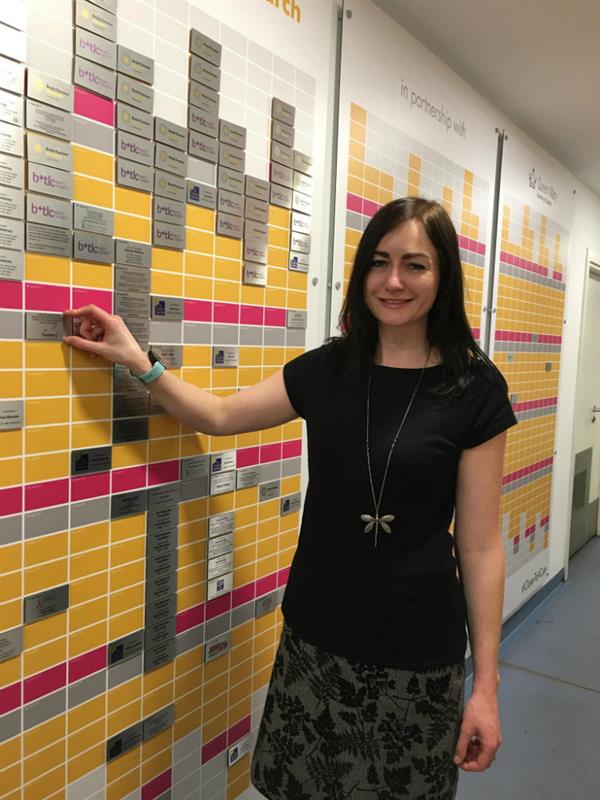 A brain tumour survivor from Derby, who has raised thousands for research into the disease, has visited the Brain Tumour Research Centre of Excellence at Queen Mary University London and honoured all those affected by the disease.

Naomi Hope, aged 35, initially chose to fundraise for the pioneering charity Brain Tumour Research after her friend’s husband Paul Halfpenny, from Glossop, died from a brain tumour in 2014. Naomi was then diagnosed herself with a benign acoustic neuroma in April 2016 after she began losing her hearing and balance and experiencing numbness on one side of her face.

The majority of Naomi’s tumour was successfully removed in September 2016 and she has recently been fitted with a bone-anchored hearing aid which will improve her hearing but not reverse the damage caused by the tumour.

Over the years, Naomi has fundraised for research into brain tumours in a variety of ways, including taking part in the On Yer Bike spinathon, completing an inflatable 5k obstacle run, and more recently the Derby 10k.

On Wednesday 11th April, Naomi was invited by the charity to visit the Brain Tumour Research Centre of Excellence at Queen Mary University London to see how all money raised contributes towards research. She also had the opportunity to place a tile on the Wall of Hope at the research centre.

Led by Professor Silvia Marino, in collaboration with University College London, the team at the centre are studying glioblastoma tumours – one of the most aggressive and deadly types of brain cancer.

Naomi, Business and Development Manager at Transition 2, a college for disabled young people, said: “Touring the Brain Tumour Research Centre of Excellence was such an honour. The research that takes place here wouldn’t be possible without fundraisers and donations. Placing my tile on the Wall of Hope has really moved me and inspired me to keep on doing what I can for the cause.

“My symptoms persisted for a few years before my diagnosis. Initially I was prescribed sleeping tablets for stress but it wasn’t until I told the dentist that I was experiencing numbness in my face, along with the loss of balance and regular falls, that alarm bells were raised. Despite it all, I was lucky enough to have my tumour removed but for many people diagnosed, this isn’t even an option.”

Janice Wright, Community Fundraising Manager for Brain Tumour Research, said: “Naomi has raised an incredible amount for Brain Tumour Research and we’re really pleased she has been to see the research taking place at the Queen Mary University London, and also place a tile on the Wall of Hope. Stories like Naomi’s remind us all that we cannot allow this desperate situation to continue.”

For further information, please contact:
Farel Williams at Brain Tumour Research on 01908 867239 or 07592 867239 or Farel.Williams@braintumourresearch.org