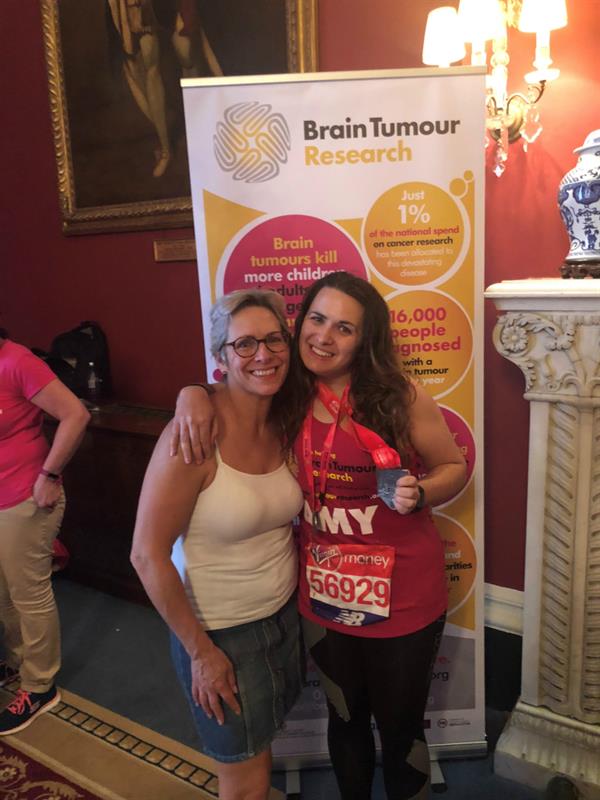 A woman who was diagnosed with a rare type of brain tumour as a teenager has completed the London Marathon to raise funds for research into the disease.

Determined to not let the disease that robbed her of her teenage years stop her from enjoying life, Amy Drummond joined tens of thousands of runners for the world’s biggest running event on Sunday 22nd April for the charity Brain Tumour Research  after she was diagnosed with brain tumour when she was 13 years old.

For months Amy suffered from seizures and issues with her memory, but doctors brushed off her symptoms as attention-seeking. However further tests and scans revealed she was living with a grade one dysembryoplastic neuroepithelial (DNET) brain tumour, the size of a 50p piece, and would need emergency surgery to remove it.

Amy, 31, who lives in Sheffield and is currently studying for a Masters in Business Administration (MBA) at the University of Sheffield, said: “Completing the London Marathon is such a personal achievement for me. It was a huge challenge but I’ve done it! Knowing I’ve raised over £4,000 so far for Brain Tumour Research as well is such a great feeling.

Amy was one of 40,000 runners taking part in the event which was started by The Queen from the grounds of Windsor Castle. It was the 38th London Marathon to take place since the first on 29th March 1981.

The money Amy has raised will go towards the pioneering charity Brain Tumour Research which funds a network of dedicated Centres of Excellence where scientists are focused on improving outcomes for patients and, ultimately, finding a cure.

Carol Robertson, Community Fundraising Manager for Brain Tumour Research, said: “For too long, brain tumours have been a neglected cancer, which is why research into the disease is so important. Many people are unaware that brain tumours kill more women under 35 than breast cancer, yet just 1% of the national spend on cancer research has been allocated to this devastating disease.

“Stories like Amy’s remind us all that we cannot allow this desperate situation to continue. We are extremely grateful for her support and offer our congratulations to everyone who took part in this year’s event to raise money for charity.”