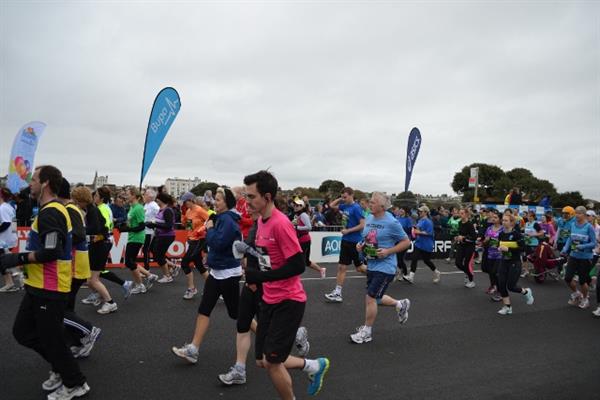 A 28-strong team of runners will be taking to the streets of Portsmouth for the Great South Run on the 22nd October to raise vital funds for research into brain tumours.

They will be raising money for the pioneering charity Brain Tumour Research, which funds a network of Centres of Excellence including its flagship centre at the University of Portsmouth where scientists are focused on improving treatments and, ultimately, finding a cure.

Many of those raising money for Brain Tumour Research know the devastation caused by a brain tumour diagnosis.

Carla Dewane, 22, a beauty therapist from Portsmouth, was inspired to take part in the race in honour of her brother Tom, who is living with four brain tumours. Diagnosed when he was just 18 years old, Tom had to turn down a dream career in the British Army because of the tumours. Now 30 and married with two small children, Tom, like many brain tumour patients, lives with the ongoing anxiety of what could happen in the future.

To make a donation to Brain Tumour Research via Carla’s Just Giving page, go to http://uk.virginmoneygiving.com/team/DevandCarlaGSR

Debbie Carpenter, a 46-year-old mum of three, from Rowner near Gosport, is running in memory of her dad Ian Burrows, who was diagnosed with a grade four malignant brain tumour in May 2016. Though the initial signs of recovery were positive, he sadly passed away on April 2017 at the age of just 68. She hopes that more research into this devastating disease will help other families in the future not have to go through the same loss.

To make a donation to Brain Tumour Research via Debbie’s Just Giving page, go to www.justgiving.com/Debbie-Carpenter2

David Dron, 51, a learning support officer from Portsmouth, was diagnosed with a brain tumour when he just 23 years old, after suffering months of extremely bad headaches. David underwent two operations to control the tumour and now counts himself as incredibly fortunate to be able to take part in events like the Great South Run because sadly less than 20% of those diagnosed with a brain tumour survive beyond five years compared with an average of 50% across all cancers.

To make a donation to Brain Tumour Research via David’s Just Giving page, go to www.justgiving.com/david-dron3

Dan Limb, 16, a student from Waterlooville, is taking part in the race in memory of his friend’s dad, Russell Goddard, who passed away in December 2016 from an aggressive grade four temporal glioblastoma brain tumour.

To make a donation to Brain Tumour Research via Dan’s Just Giving page, go to www.justgiving.com/DanLimb

Jamie Williams, 36, a Sporting Sales Executive at The Goodwood Estate, who lives in Waterlooville, knows three people who recently lost their lives to the disease and is determined to raise awareness of the current underfunding for research into brain tumours.

To make a donation to Brain Tumour Research via Jamie’s Just Giving page, go to www.justgiving.com/Jamie-Williams36

Thousands of runners are expected to take part in the 10-mile run, which takes in the iconic sights of Southsea and Portsmouth, including the Portsmouth Historic Dockyard, home of HMS Victory, the Spinnaker Tower and finishing on the seafront to take in beautiful views of the Isle of Wight.

Tim Green, Community Fundraising Manager in the South for Brain Tumour Research, said: “Brain tumours are indiscriminate; they can affect anyone, at any age, at any time. For too long, brain tumours have been a neglected cancer.  Stories such as these remind us all that we cannot allow this desperate situation to continue.

“We wish all our runners that are taking part, good luck for the race. The money raised from the event will help to fund the work at our four Centres of Excellence, including our flagship centre at the University of Portsmouth. This is where world-leading research into the causes of brain tumours and improving treatments is taking place.”