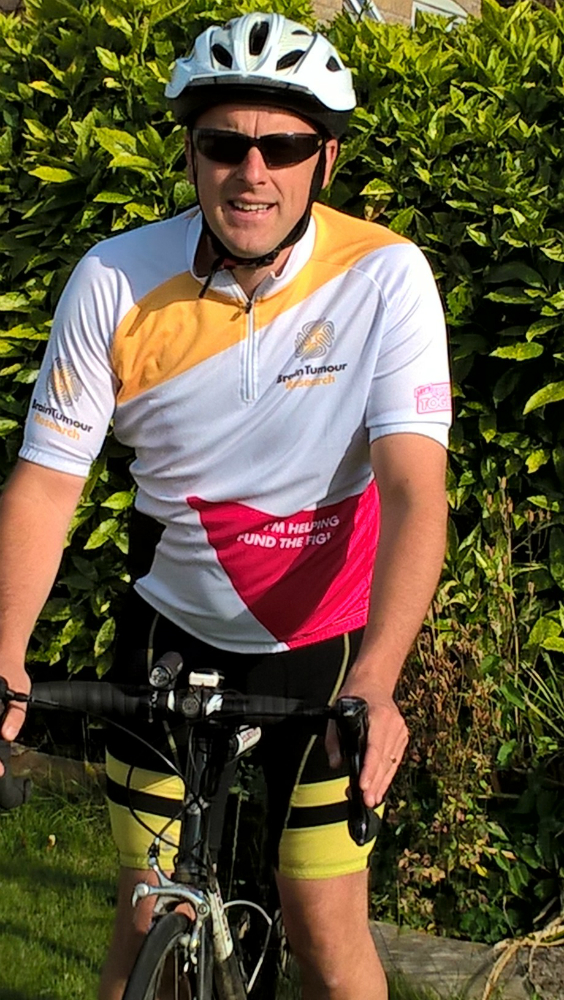 Brain tumour patient Andrew Stammers is in training for a gruelling 100-mile cycle ride to raise funds for research to find a cure, having already chalked up the 80 mile BikeBath earlier this month.

Andrew, aged 43, was a Baptist Minister at Radstock Baptist Church when he was diagnosed with an aggressive brain tumour in 2011 after suffering a seizure.

Andrew says: “I had an operation to remove what was then thought to be a benign tumour and, as I was awake during surgery, I have strong memories. I heard lots of noises as they sawed open my skull, but, being a minister, I couldn’t very well swear, could I? I said the Lord’s Prayer, however, over and over again.  The more frightened I was, the faster I said it!

“I now have regular scans to check the tumour isn’t growing back.  My most recent scan last month mercifully showed no change.”

Andrew aims to raise at least £500 for pioneering charity Brain Tumour Research. Brain tumours kill more children and adults under the age of 40 than any other cancer but just 1% of the national spend on cancer research has been allocated to this devastating disease. The charity is striving to fund a network of seven dedicated research centres whilst challenging the government and larger cancer charities to invest more in brain tumour research.

Andrew is among 24 cyclists supporting the charity by taking part in Prudential RideLondon, described as “the world’s greatest festival of cycling.” Some 25,000 are expected for the RideLondon-Surrey 100 mile sportive which will set off from the Queen Elizabeth Olympic Park in east London on Sunday 30th July before heading through the capital and out into the Surrey countryside and returning to the finish on The Mall.

Andrew continued: “Each year on my birthday I set myself a motivational challenge to celebrate reaching another year to raise money and awareness for Brain Tumour Research.  Having taken on a number of walking challenges in past years, I decided this time to notch it up a gear and try a new experience – cycling; something I never would have taken up if I hadn’t been diagnosed with a brain tumour!

“It’s a sad fact that brain tumours can affect anyone at any time but no-one knows what causes them. Treatments for patients like me are very limited. I hope my efforts will help raise awareness of this awful and indiscriminate disease and draw attention to the dreadful under-funding of research which has gone on for far too long.”

Carol Robertson, Head of Community Fundraising for Brain Tumour Research, said: “For too long, brain tumours have been a neglected cancer. Stories like Andrew’s remind us all that we cannot allow this desperate situation to continue. We are extremely grateful for his support and wish him well.”

To make a donation to Brain Tumour Research via Andrew’s JustGiving page, go to www.justgiving.com/fundraising/andrew-stammers9