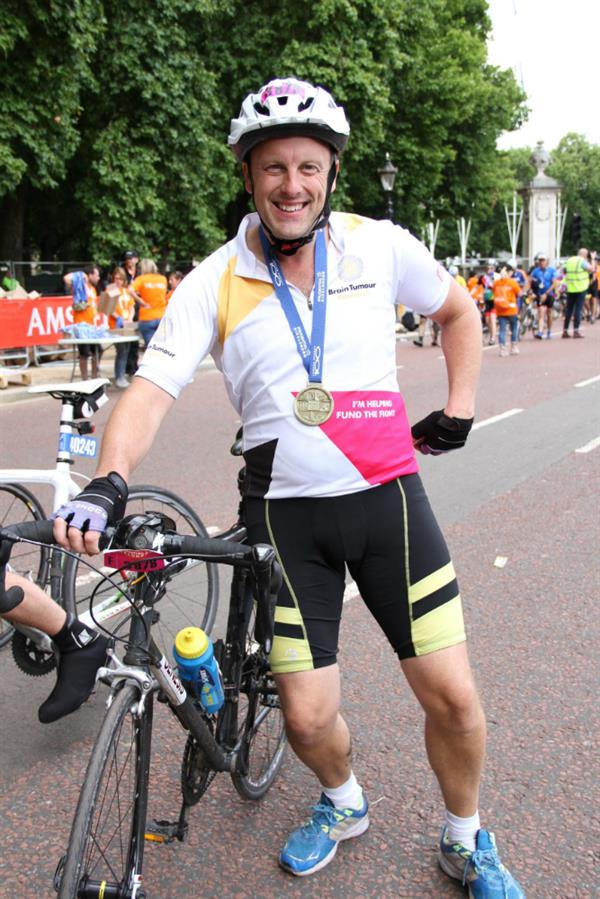 A Radstock man whose diagnosis with an aggressive brain tumour in 2011 was the inspiration for the late Somerset teenager Emma Walsh’s fundraising, has completed a gruelling 100-mile cycle challenge for charity.

Andrew Stammers, 43, has raised nearly £800 this year for pioneering charity Brain Tumour Research, which will use the funds for research into finding a cure for this devastating disease.

Andrew was a Baptist Minister at Radstock Baptist Church when he was diagnosed following a seizure. It inspired Emma Walsh of Chilcompton, who had scoliosis, to take on a number of fundraising challenges, raising thousands for Brain Tumour Research, including climbing the height of Everest on an indoor climbing wall, until her untimely death in 2016, aged 14, following complications after back surgery.

Andrew, was among 24 cyclists supporting the charity by taking part in Prudential RideLondon, described as “the world’s greatest festival of cycling.” Over 25,000 riders took part in the RideLondon-Surrey 100 mile sportive which set off from the Queen Elizabeth Olympic Park in east London on Sunday 30th July before heading through the capital and out into the Surrey countryside, then returning to the finish on The Mall.

Andrew said: ““I was really happy to finish in 7 hours and 22 minutes, smashing my target time by over an hour. 1000 miles of practice paid off!

“I didn’t find the ride as hard as I had envisaged in my head and enjoyed meeting other members of the Brain Tumour Research community and hearing and sharing stories. It was both emotional and motivational. If I didn’t have a brain tumour I wouldn’t have met these lovely people.

“It’s a sad fact that brain tumours can affect anyone at any time but no-one knows what causes them. Treatments for patients like me remain very limited. I hope my efforts will help raise awareness of this awful disease and draw attention to the dreadful under-funding of research which has gone on for far too long.”

Carol Robertson, Head of Community Fundraising at Brain Tumour Research said: “For too long, brain tumours have been a neglected cancer. Stories like Andrew’s remind us all that we cannot allow this desperate situation to continue. We are extremely grateful to Andrew for his support and congratulate him on an amazing achievement.”

To make a donation to Brain Tumour Research via Andrew’s JustGiving page go to www.justgiving.com/fundraising/andrew-stammers9