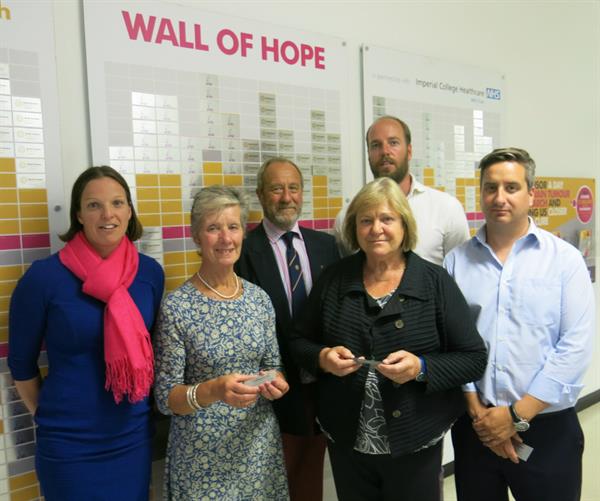 A brain tumour patient who raised tens of thousands of pounds was remembered at the research centre where he channelled his fundraising and where scientists are focused on finding a cure for brain tumours.

Dan Wiggins of Hersham, Surrey, was diagnosed with a brain tumour in 2006, aged 30.  In 2009, after enduring a variety of treatments, he was told that the tumour had become high grade and that he would need regular chemotherapy, as well as radiotherapy.

Having discovered that brain tumours kill more children and adults under the age of 40 than any other cancer, Dan committed himself to raising awareness and funds for the Brain Tumour Research Campaign (BTRC), a member charity of pioneering national charity, Brain Tumour Research.

In 2010 Dan organised and led a team of cyclists, which included his mother Rosalind and his wife Lucy’s brother, Ben Emmett, the 900 miles from John O’Groats to Land’s End, raising an awe-inspiring £60,000.

After further surgery in 2015, life seemed to be getting back to normal for Dan, but in early September, while he was doing what he loved best – sailing, Dan collapsed and was found in the water.  He was taken to hospital where he passed away a few days later, aged just 39.

His family have vowed to continue his work (Rosalind has just completed her fourth fundraising cycle ride – this time from Paris to London). On Thursday 13th July, Dan’s wife, Lucy, who still lives in Hersham, his father and mother, Robert and Rosalind, from Tavistock in Devonshire, brother Joshua from Billingshurst, West Sussex and mother-in-law and brother-in-law, Helen and Ben Emmett both from Maidenhead, placed tiles in Dan’s memory on the Wall of Hope at the Brain Tumour Research Centre of Excellence at Imperial College, London.

They were given a tour of the research facility at Hammersmith Hospital and heard from lead scientist Dr Nelofer Syed (who remembers Dan well and all the questions he would ask) about the work taking place there. They met Kevin O’Neill, a leading neuro-surgeon at Charing Cross Hospital where Dan was treated, who told them about how the research work was being translated into new surgical tools, such as the iKnife, which can differentiate between tumour and normal brain cells during surgery.

Lucy said: “Dan was committed to help raise awareness and his campaign to raise money for research was incredibly important. Somehow he always managed to remain positive and, more than anything he wanted to give hope to others. Dan would say we need to focus on improving research technology and public awareness and look to the future for people who are still alive and help them extend their life expectancy.

“An increase in funding for research into brain tumours is vital if we are to prevent other families enduring the pain we live with every day.”

Notes to Editors
Brain Tumour Research is the only national charity in the UK focused on funding sustainable research to find a cure for brain tumours. We are building a game-changing network of world-class Research Centres of Excellence in the UK. Embracing passionate member charities nationwide, £5.5 million was raised towards research and support during 2016.