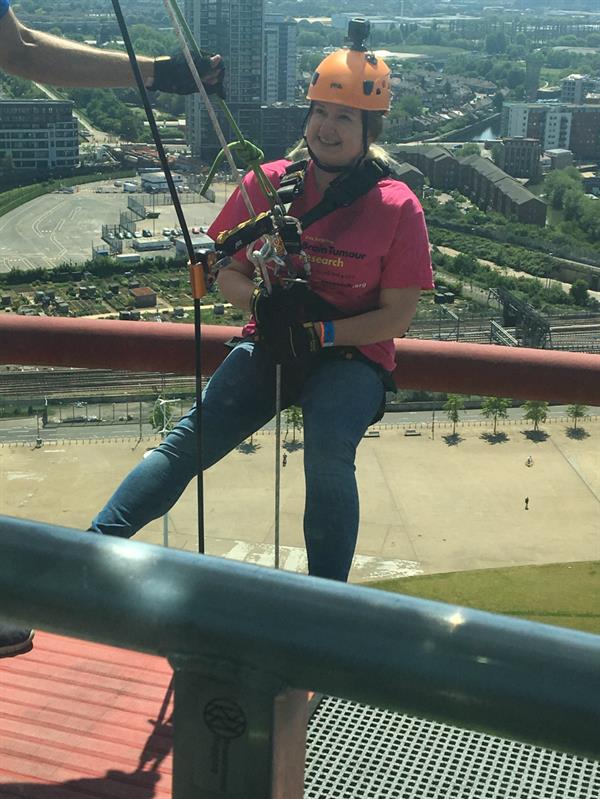 A young woman from Sandbach, who is living with a brain tumour, has abseiled the UK’s tallest sculpture to fund research into the disease.

Five years on from her own diagnosis, Hannah Watts, aged 28, took on the challenge of abseiling the ArcelorMittal Orbit to raise funds for pioneering charity Brain Tumour Research. The sculpture, which is situated in London’s Queen Elizabeth Park, stands at 114.5 metres tall, making the challenge the highest freefall abseil in the UK.

Hannah, who is a former lab technician, was diagnosed with an oligoastrocytoma brain tumour in 2013 after persistent numbness in her leg led her to visit the GP. After several doctor’s appointments, Hannah was eventually referred for an MRI scan with suspected epilepsy however the results revealed she had a grade two tumour. Aged only 24 at the time, Hannah had to undergo surgery and eight months of chemotherapy to control the tumour’s growth but within a year, the mass was growing once more. A second operation in June 2017 stabilised the tumour and Hannah is now determined to help others living with the disease.

Hannah said: “I’m overjoyed that I went through with the abseil. I don’t really like heights and I was extremely nervous in the lead up to the challenge, but now I’ve done it!

“Being diagnosed with a brain tumour opened my eyes to how poorly funded research into the disease is. I felt I needed to do something to raise funds and awareness too so that one day, others don’t have to go through what I have. If I can inspire just one other person to get out there and fundraise for this incredibly important cause, then I’ll be so pleased.”

Hannah has raised over £350 for Brain Tumour Research so far. The money will go towards the charity’s network of dedicated Centres of Excellence where scientists are focused on improving outcomes for patients and, ultimately, finding a cure.

Andrea Pankiw, Community Fundraising Manager at Brain Tumour Research, said: “Brain tumours are indiscriminate; they can affect anyone, at any age, at any time. What’s more, they kill more children and adults under the age of 40 than any other cancer – and they kill more women under 35 than breast cancer – yet just 1% of the national spend on cancer research has been allocated to this fight devastating disease.

“We are extremely grateful to Hannah and thank her for taking on the abseil challenge to raise vital funds for research. We hope as many people as possible will be inspired by her story and help us spread the word about this terrible disease.”

To make a donation to Brain Tumour Research via Hannah’s Just Giving page.