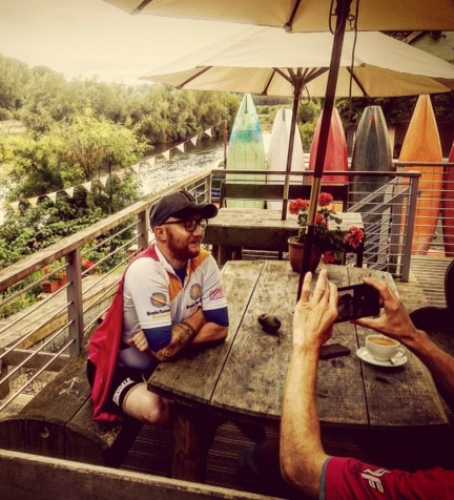 A Malvern man who was diagnosed with an inoperable brain tumour in 2008 has completed a 100 mile kayak along the River Wye coinciding with his 100th cycle of chemotherapy – the most cycles a brain tumour patient in the UK has undergone (certainly below retirement age).

Fundraising for Brain Tumour Research, Ben Lindon, now 39, set out with his support team, which included his friends Will Davies and GP David Williams, both from Shipston-on-Stour, and Chris and Janet Redman from Upton-upon-Severn, on Saturday 12th August from Glasbury-on-Wye in Powys, Wales. They reached the 100 mile mark at Chepstow in Monmouthshire on Tuesday 15th August.

The challenge was especially gruelling for Ben not only because he had never done any kayaking before (apart from a few hours training), but particularly because of the far-reaching effects of his ongoing treatment. Over the four days of the challenge, there were a couple of capsizes where Ben and members of his team got very wet – thankfully, apart from one day of almost continuous rain, the sun shone. They also had to negotiate a considerable number of very challenging rapids, as well as deal with some really strong currents when they reached the section of the Wye where it becomes tidal.

Ben commented: “It has been the most amazing experience and, along with the fantastic scenery in the Wye Valley, I have particularly enjoyed seeing all the wildlife along the river, including kingfishers and birds of prey, herons, swans and all manner of ducks and even otters. By the time we reached the finish, however, I was totally knackered and desperate for a pint or two of cider!

“What has kept me going over the last four days is the knowledge that my efforts are raising vital funds for research to help find more effective treatments and ultimately a cure for brain tumours – and of course the sustenance of plenty of peanut butter sandwiches, honey and mountains of pasta! The only thing I have to show for my awesome adventure is a pretty impressive number of blisters on my hands and quite a lot of sunburn!

“I had two lucky charms with me – a lego man which belongs to my son Sidney, three, and my daughter’s panda, known as Sue (from the Sooty and Sweep show). Both of these survived the 100 miles, although lego man is now missing a leg so Sid thinks he must now be a real pirate!

“I want to thank my absolutely rock-solid support team, without whom this would never have happened. Each and every one of them was a star and really helped me to set up and achieve this latest challenge.

“Also, it has been humbling to see lots of donations on my JustGiving page from friends, but also complete strangers who have been motivated to act by their own experience with a brain tumour or that of a loved one. I want to thank everyone who has donated to this cause with whatever they can spare, whether it be £2 or £1,000 – every donation is so important to me.

“I’m lucky to have survived beyond five years – less than 20% of us brain tumour patients do –and I will continue to take on a personal challenge each year until I am broken.”

Ben’s Wye 100 challenge has to date raised well over £6,000 bringing his total raised for Brain Tumour Research to more than £16,000. Over the years Ben has run marathons, including the London Marathon, conquered the Three Peaks (the highest mountains in England, Scotland and Wales in 24 hours) and last year cycled nearly 900 miles from John O’Groats to Land’s End, having been through months of rehabilitation following a massive stroke just one year before.”

Ben dedicated his Wye 100, Wye Not challenge to a young man from Nottingham, called Ryan Taylor who he became friends with on social media. Tragically, Ryan died earlier this year aged 26 from a brain tumour. Ben now keeps in touch with Ryan’s sister Melanie Wilkinson who is also a big supporter of Brain Tumour Research.

Carol Robertson, Head of Community Fundraising for Brain Tumour Research said: “Ben is an amazing ambassador for our charity as well as an incredible fundraiser. We are so grateful to him for all he does. It’s vital that campaigners like Ben help to shine the spotlight on this neglected cancer. We desperately need more awareness and research investment so we can find a cure.”

You can still sponsor Ben via https://www.justgiving.com/fundraising/Ben-Lindon6