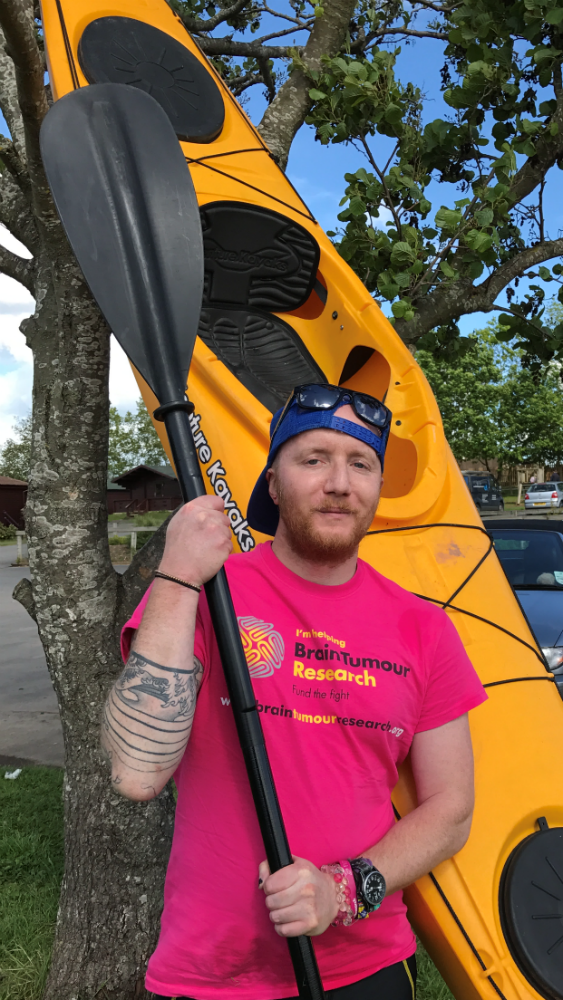 A Malvern man who was diagnosed with an inoperable brain tumour nine years ago, aged 29, is gearing up to kayak 100 miles along the River Wye to fundraise for Brain Tumour Research, coinciding with his 100th cycle of chemotherapy.

Believed to be the highest number of cycles of chemo undergone by any brain tumour patient in the UK, and certainly by anyone under retirement age, Ben Lindon, now 39, will be setting out on 12th August to paddle from Glasbury-on-Wye in Powys, Wales, to the sea at Chepstow in Monmouthshire.

This challenge comes after several others which Ben has set himself over the years in order to raise desperately needed funds for research into brain tumours. His first big challenge after diagnosis saw Ben complete the Brighton Marathon. Among other incredible feats,  Ben has also conquered the Three Peaks (the highest three mountains of England, Scotland and Wales in 24 hours) and last year he cycled 1,000 miles from John O’Groats to Land’s End.  To date Ben has raised nearly £10,000 for Brain Tumour Research.

Ben said: “I’m lucky to have survived beyond the five years – less than 20% of us do –and I will continue to take on a personal challenge each year until I am broken.

“I’m completing these challenges for two reasons: brain tumours kill more children and adults under the age of 40 than any other cancer, yet just 1% of the national spend on cancer research has been allocated to this devastating disease. It is a disease that takes children from parents and parents from children. This is unacceptable and we need to change this.

“In simple terms, people don’t stand a good chance of survival because so little is known about this disease. Research needs money and I see it as one of my jobs to get that money.

“On a selfish note, I was told I couldn’t have children after aggressive radiotherapy and what will be a lifetime of chemotherapy. Extraordinarily, I have been blessed with a beautiful daughter Martha, now 4, and a very mischievous son Sidney, 3. I’d like to show them that ordinary people like me with a life-limiting illness, can overcome anything and see beautiful places if you fight.

“If I can leave a legacy, this is mine and I think it’s worth 100 miles of kayaking and potentially trench foot of the bum!  Two years on, after two weeks of massive seizures which induced a stroke,  and being told by my physio: “STOP DOING THESE THINGS, BEN!”, I am still here and hell-bent on taking on and completing challenges for this cause, so close to my heart.

“I am dedicating my “Wye 100, Wye Not?!” as I am calling it, to Ryan Taylor, a young man from Nottingham, who I became friends with on social media. Ryan died earlier this year aged 26 from a brain tumour.  He never got the chance to start a family of his own. His sister, Melanie Wilkinson, is a big supporter of Brain Tumour Research.”

Carol Robertson, Head of Community Fundraising for Brain Tumour Research said: “Ben is an amazing ambassador for our charity as well as an incredible fundraiser. We are so grateful to him for all he does. It’s vital that campaigners like Ben help to shine the spotlight on this neglected cancer. We desperately need more awareness and research investment so we can find a cure.”

You can sponsor Ben via https://www.justgiving.com/fundraising/Ben-Lindon6