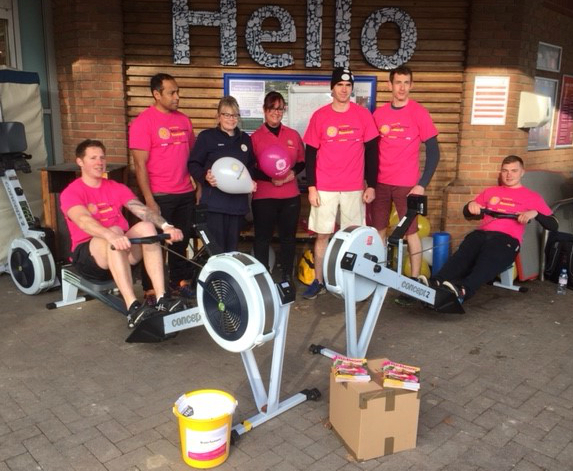 The soldiers based at Carver Barracks, Saffron Walden decided to take on the challenge and raise vital funds for pioneering charity Brain Tumour Research in honour of Cpl James Campling who was diagnosed in June 2016 with a grade four glioblastoma multiforme, a very aggressive brain tumour.  The challenge saw them take on a 24-hour rowathon on Tuesday 28th November 2017 at Tesco in Saffron Walden.

The team set themselves a target of 546 km, with each kilometre representing every day that James has fought the disease, from the day of being diagnosed, right up to the day of the event. The team beat their original target and rowed 560km, which is the equivalent to rowing one and a half lengths of The Thames, raising over £1,240 to go towards pioneering brain tumour research.

The organiser of the event, Corporal Steven Atkin, said: “We were all shocked when we heard the news that James had a brain tumour. He was a fit and healthy 26-year-old, so why would he get a tumour? There is little known about the disease and that is why it’s so important to help raise funds for further research.”

James Campling is an experienced Aeromedical Evacuation specialist serving with the Royal Air Force and is based at RAF Brize Norton, in Oxfordshire.

Despite the tumour affecting his health and suffering from seizures, James is determined to keep fighting the disease and even climbed the Yorkshire Three Peaks, just three months after undergoing surgery.  So far, James has raised over £11,000 for research into the disease through holding events in his hometown of Grimsby.

Paula Rastrick, Community Fundraising Manager for Brain Tumour Research said: “For too long, brain tumours have been a neglected cancer. Stories like James’s reminds us all that we cannot allow this desperate situation to continue. We are extremely grateful to Steven and the team for supporting our work and congratulate them on completing a tough challenge in honour of their friend and colleague.”

Susie Diggons, Community Champion at Tesco in Saffron Walden said: "We were honoured to support such a fantastic event for such a good cause and would like to thank our customers for all their generosity.”

To make a donation to Brain Tumour Research via Steven’s Just Giving page, go to https://www.justgiving.com/fundraising/steven-atkin5