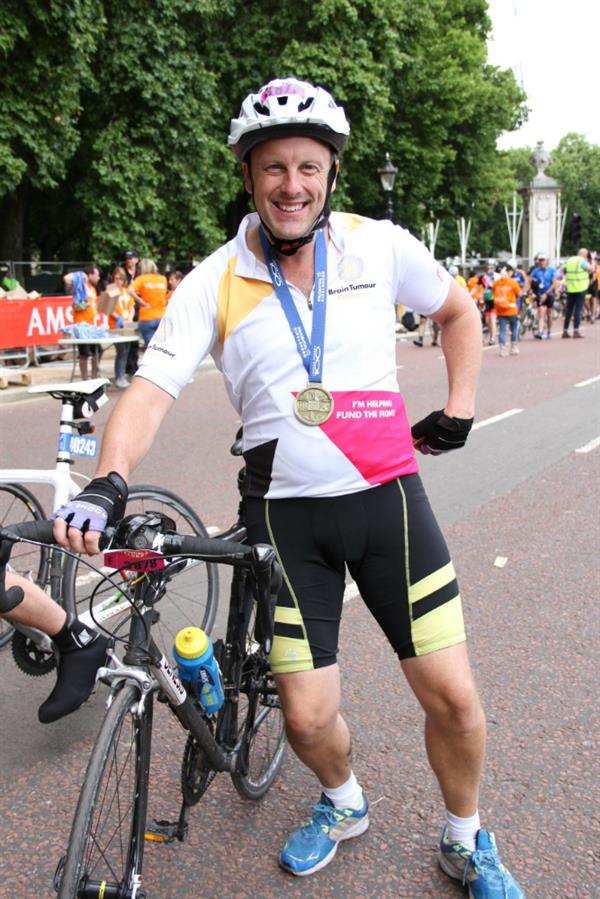 A Somerset man with an incurable brain tumour and a strong Christian faith is stepping up a gear with his annual fundraising challenge as he celebrates the miracle of reaching another birthday. On 14th June, Andrew will set out from the pier at Weston-super-Mare and attempt to cycle 250 miles to the pier at Walton-on-the-Naze in Essex in around 24 hours.

Andrew Stammers, 43, who lives in Radstock and works as an Evangelist at St Philips and St James in Old Down, Bath, where he and his wife Suzanne both grew up, will be featured in BBC One’s Songs of Praise programme on Sunday 3rd June, which ironically is the date of Andrew’s next birthday, as part of a feature on people living with cancer.

Andrew was diagnosed with an aggressive brain tumour in 2011 after suffering a seizure. Then a Baptist minister in Radstock, Andrew underwent wide-awake surgery to minimise the risks of long-term effects because the tumour was very close to his speech and understanding sensors. He was told that the likelihood was that the tumour would grow back in one to two years.

After six weeks of radiotherapy and annual scans since 2011, Andrew has mercifully survived well beyond the two-year milestone he was initially given.

Andrew, a father of three young daughters, explains: “Each year on my birthday I set myself a motivational challenge to celebrate reaching another year to raise funds and awareness for pioneering national charity Brain Tumour Research. Brain tumours kill more children and adults under the age of 40 than any other cancer, yet just 1% of the national spend on cancer research has been allocated to this devastating disease.

“Moreover, less than 20% of those diagnosed with a brain tumour survive beyond five years compared with an average of 50% across all cancers.

“To date my challenges have included a 100-mile walk from Bath to Hungerford and back and cycling 100 miles in under eight hours to complete RideLondon.

“This year I wanted to push myself further and decided to take on this non-stop, no sleep 250-mile Pier to Pier cycle.

“I am grateful to my friend Dave Atkinson, a semi-pro cyclist and co-owner of Road CC online cycling magazine, who is not only supporting me in organising Pier to Pier, but also is riding with me. Do come along to Weston-super-Mare pier at 8pm on the 14th to wave us off. We will be calling in at Brain Tumour Research’s HQ in Milton Keynes mid-morning on the 15th and hoping to finish at Walton-on-the-Naze pier soon after 8pm the same day.

“Please donate to my fundraising page to help find more effective treatments and ultimately a cure for brain tumours, bringing hope to the thousands of patients diagnosed each year who are living with a death-sentence like me.”

Emma Cronin, Community Fundraising Manager for Brain Tumour Research, said: “Brain tumours are indiscriminate; they can affect anyone at any age, at any time. They kill more men under 45 than prostate cancer and more women under 35 than breast cancer.

“We are extremely grateful to Andy for his continued fundraising for our charity and wish him all the best for another successful challenge. We hope as many people as possible will support Andy’s endeavour, or even consider holding their own events, helping to spread the word about this terrible disease.”

The money raised will go towards ground-breaking charity Brain Tumour Research which funds a network of dedicated Centres of Excellence where scientists are focused on improving outcomes for patients and, ultimately, finding a cure.

To make a donation go to www.justgiving.com/fundraising/andrew-stammers9