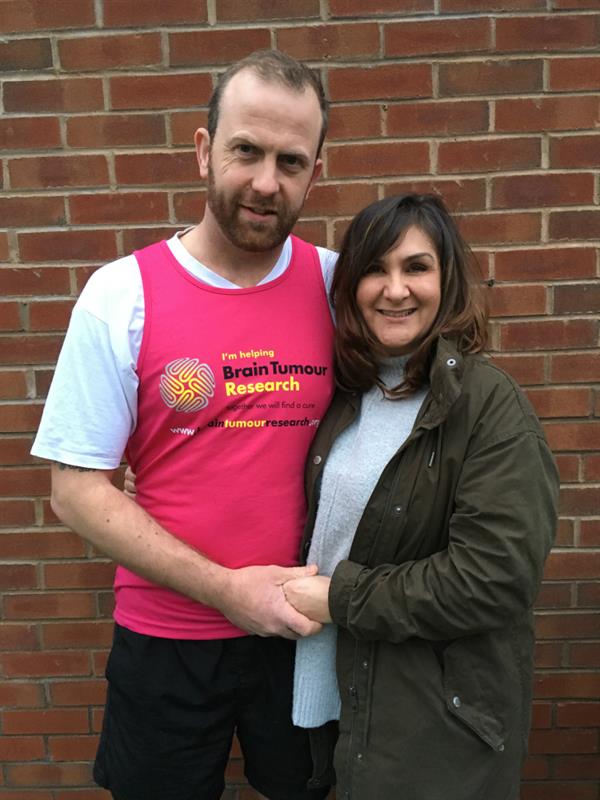 A man whose wife is living with a rare type of brain tumour is taking on the challenge of running the London Marathon to raise funds for research into the disease.

Wayne Goodge, who lives and works in Grantham, has already raised more than £1,000 and is hoping to reach a target of £3,500 for the pioneering charity Brain Tumour Research which funds a network of Centres of Excellence where scientists are focused on improving outcomes for patients and, ultimately, finding a cure.

Clare Goodge, 48, was diagnosed with an acoustic neuroma brain tumour in September 2015 after she started experiencing some balance problems and felt generally unwell. An acoustic neuroma is a benign tumour which occurs in a tiny canal connecting the inner ear to the brain. As the tumour grows, pressure is put on the surrounding nerves and on the brain.

In January 2016, Clare underwent a 14-hour operation at Sheffield’s Royal Hallamshire Hospital to reduce the size of her tumour, and has since received radiotherapy treatment. Although her tumour is much reduced in size and will be monitored at regular MRI scans, Clare is now completely deaf in her left ear and has some mobility problems on the left side of her body. Wayne and Clare have two children, Jennifer, 19 and Brady, nine, and they’ve supported their mum throughout her illness and treatment.

Wayne, 36, who enjoys running and has previously taken part in a number of half marathons said: “Having a brain tumour has changed Clare's life as it has the lives of thousands of other people who are diagnosed with brain tumours every year. I’ve seen first-hand the effects this has had on her and am very proud of how brave she’s been, and incredibly proud to be Clare's husband.

“I’m very grateful to have a place in the 2018 London Marathon to support Brain Tumour Research, and want to do all I can to raise awareness and urge people to donate to this great cause. So little is known about the causes of brain tumours so it’s vital that we raise as much money as possible to fund further research.”

Wayne will be pounding the streets of the capital on Sunday 22nd April as he takes part in the marathon, which is the world’s most famous running event.

Carol Robertson, Community Fundraising Manager for Brain Tumour Research, said: “Brain tumours kill more children and adults under the age of 40 than any other cancer yet just 1% of the national spend on cancer research has been allocated to this devastating disease.

“For too long, brain tumours have been a neglected cancer. Experiences like this family’s reminds us all that we cannot allow this desperate situation to continue. We are extremely grateful to Wayne for his support and are appealing for runners who have a ballot place for the marathon to join him on Team Brain Tumour Research by nominating us as their chosen charity for 2018. Together we will find a cure.”

To make a donation to Brain Tumour Research via Wayne’s JustGiving page go to https://www.justgiving.com/fundraising/wayne-goodge2