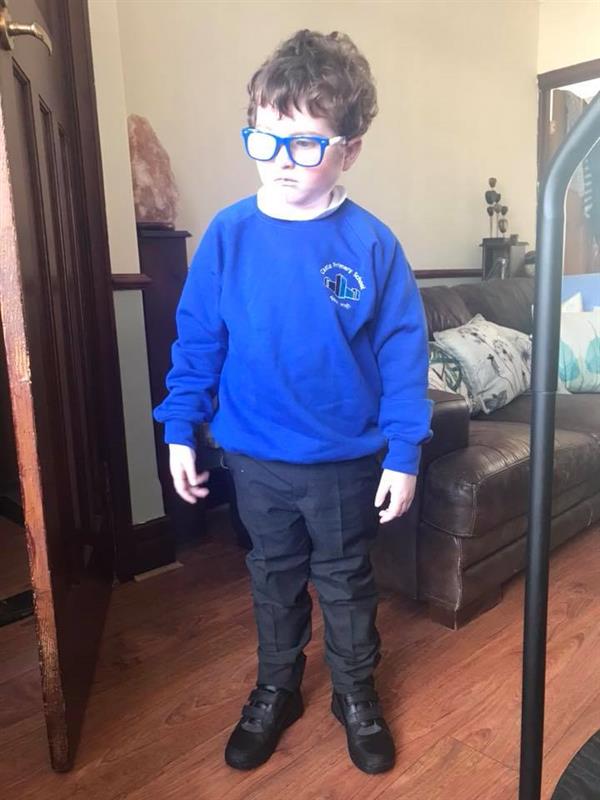 It may have been three weeks after the start of term but nobody minded that little Harry St Ledger was a bit late back after the summer break.

Classmates at Castle Primary School in Portchester gave seven-year-old Harry St Ledger a hero’s welcome as he returned after having treatment for a rare and incurable brain tumour.

It was a day his parents, Cairan St Ledger and Fiona Lear, feared they would never see. His delighted mum said: “We couldn’t quite manage to get him back for the first day of term but that didn’t matter. Harry continues to amaze us all as he fights on against the odds. We have been on a roller coaster of emotions this summer.

“While Harry’s tumour remains incurable, he has defied everyone with how well he now is and how he coped with his radiotherapy. I took photos on the doorstep as he was leaving for school and, typical Harry, he asked me why I wanted so many pictures. I told him it was because it was a day we feared we might never see.”

The family, from Portchester, are working with the Brain Tumour Research charity to raise awareness of brain tumours which kill more children and adults under the age of 40 than any other cancer. They launched Harry’s Appeal for the charity and want to address the historic underfunding for research into brain tumours which have been allocated just 1% of the national spend on cancer research.

Cairan, Fiona, and Harry’s sister Emonie have had a summer of highs and lows. After coming through radiotherapy treatment earlier in the year, Harry went on to have chemotherapy and has experienced a number of setbacks.

A highlight of the summer was when the family travelled to Cornwall and then to Disneyland Paris to enjoy a welcome respite and where Harry met his ultimate superhero, Spider-Man. The action hero has been a pivotal character in Harry’s life and he chose to have his distinctive hooded and web-covered face to decorate the mask he had to wear during his gruelling radiotherapy sessions.

Fiona said: “We were all so touched as Harry ran into the arms of Spider-Man, who was clearly moved as we showed him photos of our boy during his treatment.”

Just days before returning to school Harry led a Walk of Hope on Saturday 29th September along Portsmouth seafront. The event was one of several walks organised by Brain Tumour Research and was attended by 200 supporters who, between them, raised more than £5,500.

Brain Tumour Research funds a network of Centres of Excellence, including one at the University of Portsmouth, where scientists are focused on improving treatment options and, ultimately, finding a cure for brain tumours. The charity is also campaigning for the government and larger cancer charities to spend more national on research into the disease.

Tim Green, Senior Community Fundraising Manager at Brain Tumour Research, said: “Harry is an asset to his family, a determined young boy and has achieved so much. We are very grateful to him and his family for their ongoing support and for joining us at the Walk of Hope.”

To donate to Brain Tumour Research via Harry’s JustGiving page, go to https://www.justgiving.com/campaign/Spidermanharry