Brain tumour baby off to school 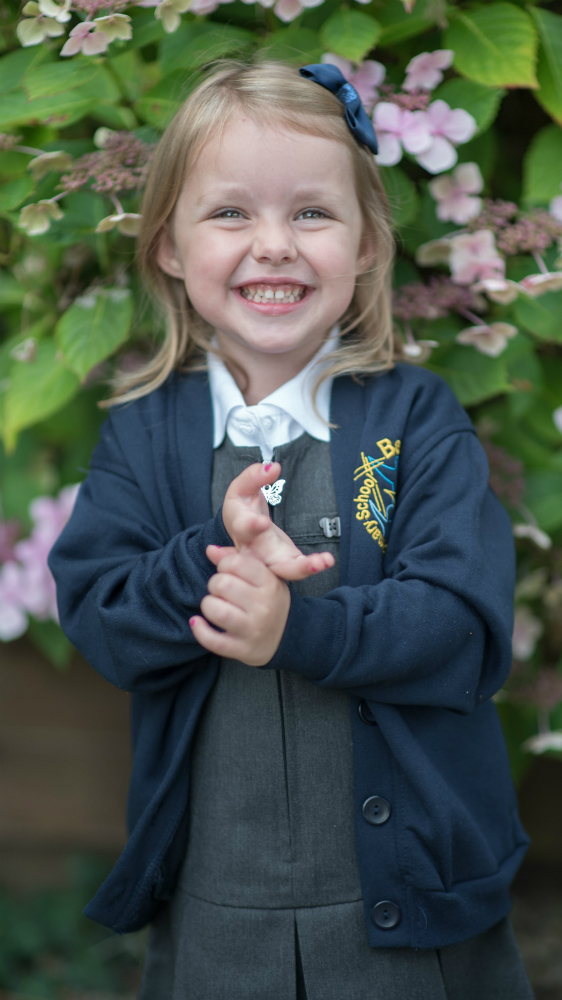 Little Lyra Cole was just five months old when she underwent emergency surgery to remove a brain tumour that had been repeatedly misdiagnosed as a virus. Today, the confident and friendly four-year-old is excited about her first day of school, a day her parents had once feared might never come.

Her dad, Dan Cole, 36, explains how their nightmare started: “The first inkling we had that anything was wrong came in October 2013 when we noticed Lyra seemed to have lost her appetite and she developed a rash. The doctor told us it was a virus but the symptoms didn’t go away and we persisted as we weren’t happy with the diagnosis. Lyra seemed to be very tired and didn’t eat much. Then she started vomiting two or three times each day.”

First-time parents, Dan and Lyra’s mum Ellie Hawkes, 26, went to their GP four times with their sick baby, each time being assured it was just a virus and that Lyra would get over it. Unconvinced by this explanation and seeing their daughter deteriorate, they took her to hospital near their home in Highbridge, Somerset. Doctors initially thought Lyra might have meningitis, until a CT scan revealed she had a tumour the size of a small orange growing in the back of her brain.

“Ellie and I were numb and in total shock,” remembers Dan, “although we didn’t believe she had a virus, we never in our worst dreams thought it would be this.” Lyra was diagnosed with a low-grade choroid plexus papilloma, a rare form of brain tumour that can particularly affect infants. The Coles’ baby girl was immediately transferred to Frenchay Hospital in Bristol for an 11-hour surgery.

The surgery was successful but, within months, the family were facing fresh fears as it became obvious that Lyra was struggling to see. “She had always been a quick developer and crawled early”, says Dan, “so when Lyra suddenly started crawling into doors we knew something wasn’t right. It became so bad that she could only distinguish night and day.”

Just a month after Lyra’s first birthday, she underwent the second surgery of her short life to remove a cyst growing on her optic nerve, a complication from her earlier operation.

“Thankfully”, smiles Dan, “by the time she came round and was back on the ward it was obvious her sight was coming back. Lyra looked happy and, instead of looking through us as she had previously done, there was a discernible difference that she was actually looking at us. She reached out to touch Ellie’s eyelashes – that was a lovely moment and a nice confidence boost for us all.”

Since her last operation in 2014, Lyra has recovered well. Her regular MRI scans and check-ups have been gradually reduced in frequency until they are now just an annual occurrence and she was discharged from Bristol Eye Hospital earlier in the summer. She is now a normal little girl, looking forward to starting at Berrow Primary School on 5th September, with a scar hidden underneath her hair.

“The doctors told us to treat her as if it never happened as it is very unlikely that a tumour of this type will come back,” explains Dan. “We used to get very anxious at first but now we try not to panic. Lyra adores gymnastics and dancing, she’s a real performer and loves talking to people. We do get her checked out though if anything happens to her head. She fell off a bouncy castle recently and banged her head so that meant a trip to hospital.”

Lyra now has a little brother, Charlie, 17 months, and is loving being a big sister. “She’s so clever for her age,” says proud dad, Dan, “she can’t wait for school and to wear her new ‘nooniform’ as she calls it!”

Brain tumours kill more children than leukaemia, according to the charity Brain Tumour Research, yet just 1% of the national spend on cancer research has been allocated to this devastating disease.

Dan continues: “We know that we are one of the few lucky families to be able to tell her survival story. Funding for research into brain tumours needs to be increased, it’s just not enough.”

Hugh Adams, from the charity Brain Tumour Research, commented: “It’s wonderful to see Lyra grow up and head off to school. Sadly, positive stories like hers are nowhere near common enough. Less than 20% of those diagnosed with a brain tumour survive beyond five years compared with an average of 50% across all cancers. Brain Tumour Research is focused on funding sustainable research to find a cure for brain tumours, so more families can see their children grow up.”

For further information, please contact:
Caroline Marrows at Brain Tumour Research on 01908 867221 or 07714 743764 or Caroline@braintumourresearch.org