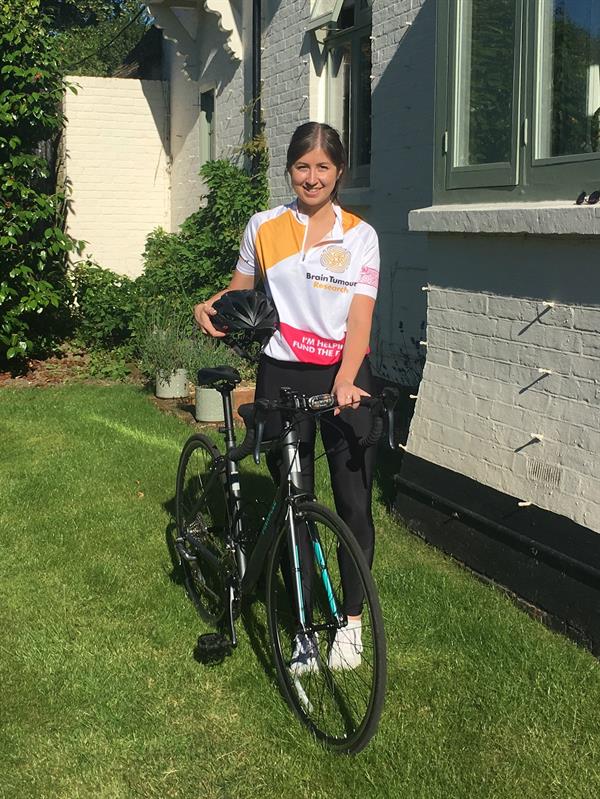 A student from Guildford is taking on a 100-mile cycle challenge in memory of her great-aunt who died from a brain tumour.

Imogen Blake, 24, will do the annual Prudential RideLondon in memory of her great-aunt, Angela Mason OBE JP, a former chairman of magistrates at Birmingham Magistrates Court. Shocked by the prevalence of brain tumours and the lack of funding which is allocated to research to find a cure, Imogen is now tackling the arduous sportive in aid of the Brain Tumour Research charity.

Angela, from Harborne in Birmingham, was admitted to hospital after a seizure and initially diagnosed with an encephalitic infection. She returned home to recover but when, two months later, her speech became muddled and confused, she was readmitted to hospital where doctors diagnosed her with a grade 4 glioblastoma multiforme (GBM), a highly aggressive brain tumour. Angela was given six to nine months to live but her health deteriorated rapidly and she passed away in July 2016, three days after her 68th birthday, and six months after her first symptom.

Awarded an OBE in 2002 for services to the Administration of Justice in Birmingham, Angela had a successful career in law as well as volunteering for St. John’s Ambulance and conducting funerals in retirement.

Her great-niece, Imogen, who studies Sport and Exercise Psychology at Brunel University, said: “I’m really nervous but very excited about RideLondon. I didn’t even own a road bike until January but I’ve started training and I’m confident I can finish it!

“Angela was such a warm-hearted, generous and caring person. She was a huge inspiration to me with the work she did whilst being a magistrate which saw her awarded an OBE.

“There is just not enough funding for research into this disease and I want to help in anyway possible to prevent this happening to other people. I also want to spread awareness of how dire the current statistics are.”

Aiming to raise at least £500 for the charity, Imogen is among 24 cyclists supporting the charity by taking part in Prudential RideLondon, described as “the world’s greatest festival of cycling.” Some 25,000 are expected for the RideLondon-Surrey 100-mile sportive which will set off from the Queen Elizabeth Olympic Park in east London on Sunday 29th July before heading through the capital and out into the Surrey countryside and returning to the finish on The Mall.

Tim Green, Community Fundraising Manager for the Brain Tumour Research charity, said: “For too long, brain tumours have been a neglected cancer. Angela’s story reminds us all that we cannot allow this desperate situation to continue. We are extremely grateful to all our riders for their support and wish them well.”

To make a donation to Brain Tumour Research via Imogen’s JustGiving page, go to https://www.justgiving.com/fundraising/imogen-blake