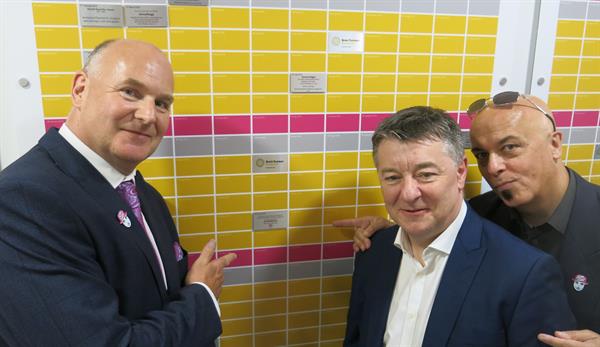 Three rock musicians, all members of glam rock-inspired band Pouk Hill Prophetz, who lost a friend to a brain tumour last year, have raised thousands to help fund scientific research into finding a cure for the disease.

Lead singer and bassist, Nigel Hart, aged 55, from Dollis Hill, North West London, guitarist, Martin Brooks, 54, from Burton Latimer near Kettering and drummer, Trevor West, 56, from Radcliffe-On-Trent, Nottingham, chose to fundraise for the Brain Tumour Research charity when they learned that a fan, who quickly became a good friend, was fighting a brain tumour.

Cat Anderson, who grew up in Corby and later lived in Uppingham, was diagnosed with an aggressive and incurable brain tumour in 2014 and, after surgery, radiotherapy and chemotherapy treatment, seemed to be doing well. Shocked to discover that brain tumours kill more children and adults under the age of 40 than any other cancer, Cat and her parents, Rab and Margo Anderson of Kettering, set up a fundraising group called Cat in a Hat under the umbrella of Brain Tumour Research.

On Wednesday 6th June, Nigel, Martin and Trevor visited the Brain Tumour Research Centre of Excellence at Queen Mary University London to learn more about the research. The musical trio, whose repertoire includes many of the big hits from the 70s by bands like Sweet, Slade and T.Rex, also had the opportunity to place a tile on the Wall of Hope at the research centre.

Led by Prof. Silvia Marino, in collaboration with University College London, the team at the centre are studying glioblastoma tumours – one of the most aggressive and deadly types of brain cancer and the tumour that Cat died from.

Nigel said: “We quickly decided we wanted to get involved with supporting Cat in a Hat and organised charity shows and a rock memorabilia auction which together have raised more than £10,000 to date, including match-funding from Deutsche Bank. Today has been a fantastic opportunity to see how it’s making a difference to researchers.”

Trevor commented: “It’s an honour to visit one of the Brain Tumour Research Centres of Excellence and see where all the research takes place. When we met Cat a couple of years before she passed away, we were amazed at how positive she was, yet stunned that the life expectancy for brain tumour patients was so poor with less than 20% surviving beyond five years, compared with an average of 50% across all cancers.”

Martin added: “The tile we placed symbolises not only the money we’ve raised for the Brain Tumour Research charity, but also commemorates our dear friend Cat who is sorely missed by so many, not least her parents, who have both become good friends of ours too.”

Rab Anderson summed up: “I think what Pouk Hill Prophetz have done is nothing short of fantastic. We are so humbled that they have chosen to support Brain Tumour Research through Cat in a Hat. I am also proud to call these guys my friends now also.”
Brain tumours are indiscriminate; they can affect anyone at any age, yet just 1% of the national spend on cancer research has been allocated to this devastating disease.

Michael Thelwall, Head of Community Fundraising for Brain Tumour Research, said: “Nigel, Trevor and Martin have raised an incredible amount for Brain Tumour Research and we’re really pleased they have been to see the research taking place at Queen Mary University London, and also place a tile on the Wall of Hope. Stories like Cat’s remind us all that we cannot allow this desperate situation to continue.”

To make a donation in memory of Cat Anderson go to http://uk.virginmoneygiving.com/team/catinahat1
Follow Pouk Hill Prophetz on Facebook here:
https://www.facebook.com/Pouk-Hill-Prophetz-852856794762299/