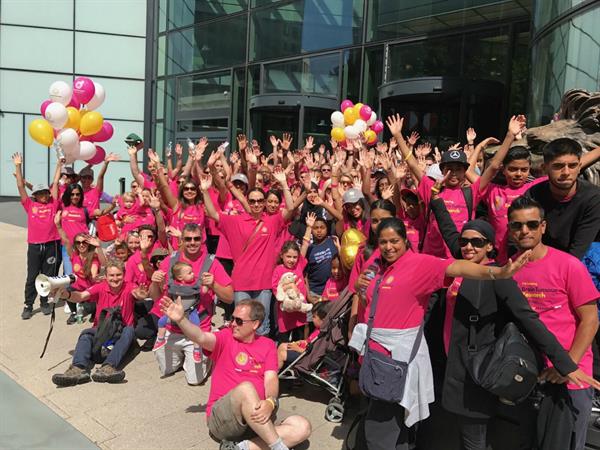 A husband and father who was lost to a brain tumour was remembered by more than 200 family, friends, and colleagues who took part in a sponsored walk on what would have been his 40th birthday.

Banker David Hetherington passed away last November and last weekend (Sunday 6th August) his wife Shaz and children Layla, aged five, and Daniel, three, lead a celebration of his life with a sponsored walk to raise money for the charity Brain Tumour Research. They gathered near the HSBC tower at Canary Wharf where the couple both worked and released 40 balloons to mark the birthday.

Around 100 people took part in the Walk4David40 event in London while others, including many former colleagues at the bank, held their own events in Florida, Brisbane, Kuala Lumpur, Asturias in Spain, Pennsylvania and Bulgaria. More than 20 people took part in Carlisle, where David grew up, including his parents John and Judith and friends Elizabeth and Stephen Sewell, and their children Francesca, four, Oliver, eight, and Ben, 11. The couple were at Austin Friars School with David who, subsequently, became their best man and is Ben’s godfather.

Many others did the walk in other UK locations including Littlehampton, Harpenden, and the Cairngorms.

The event with 5k and 10k routes, was raising money for Brain Tumour Research which funds a network of Centres of Excellence where scientists are focused on finding a cure and improving outcomes for patients. The charity is also campaigning to see the national spend on brain tumour research increased to £30 - £35 million a year, in line with breast cancer and leukaemia, in order to advance treatments, and ultimately find a cure.

Shaz, 40, from Woodford Green, said: “The day was completely overwhelming. It was a very bitter sweet experience and totally heart-wrenching that so many people thought so much of David that they came along with their families. It is wonderful that he made such an impression on so many people.

“David was diagnosed with a low-grade brain tumour when I was 31 weeks pregnant with our first child. When our second baby was just eight weeks old, his tumour had changed to a cancerous and aggressive glioblastoma.

“David fought so bravely and never once complained about what he was going through. It broke my heart to have to explain to the children what they should do if he had a seizure. When it became clear that David wouldn’t be around to see the children grow up, he started to write emails to them offering advice which I hope they take comfort from reading when they are older.

“David became increasingly unwell and underwent gruelling chemotherapy and radiotherapy treatment. He also took part in immunotherapy trials but I’m not sure if that bought us any more time.

“When David was dying and it became clear nothing more could be done, I was told to take him home and care for him there. Although he was terminally ill, at 39 David was too young for a nursing home and, ironically, not close enough to death for a hospice.”

Fortunately Shaz was able to secure a bed in a nursing home in a neighbouring borough where David and his family were cared for during the final three weeks of his life.

Shaz added: “It was so important to us to mark what would have been David’s 40th birthday and to celebrate his life. We called it ‘the world’s local walk’ as people took part in so many locations.

“It is shocking to learn that brain tumours kill more children and adults who, like him, are under the age of 40, than any other cancer yet just 1% of the national spend on cancer research has been allocated to this devastating disease.”

The event has raised £8,500 so far. To make a donation to Brain Tumour Research in memory of David go to www.justgiving.com/fundraising/walk4david40