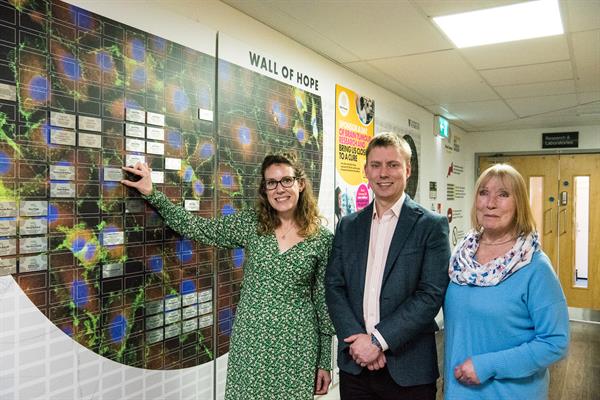 On Tuesday (29th November), we were delighted to welcome supporters to our Centre of Excellence in the University of Plymouth.

Attendees, all of whom have experienced the devastating effects of brain tumours, had the opportunity to tour the lab where the pioneering research is taking place and meet the scientists who are making the vital breakthroughs that will get us closer to a cure for brain tumours. Many also placed tiles representing the days of research they have sponsored on the Wall of Hope.

It was an especially poignant moment for Nicola, who lost her husband James to a glioblastoma (GBM) on Valentine’s Day this year. James was a lecturer in international relations and politics at the University of Plymouth – which has set up an annual award in his memory – and earlier this year, Nicola collected his PhD.

Accompanied by James’ mum Frances, brother Grahame and sister-in-law Jen, as well as her father Andrew and uncles Martin and Adrian who lost their mother Joy (Nicola’s grandmother), Nicola placed two tiles on the Wall in memory of James. 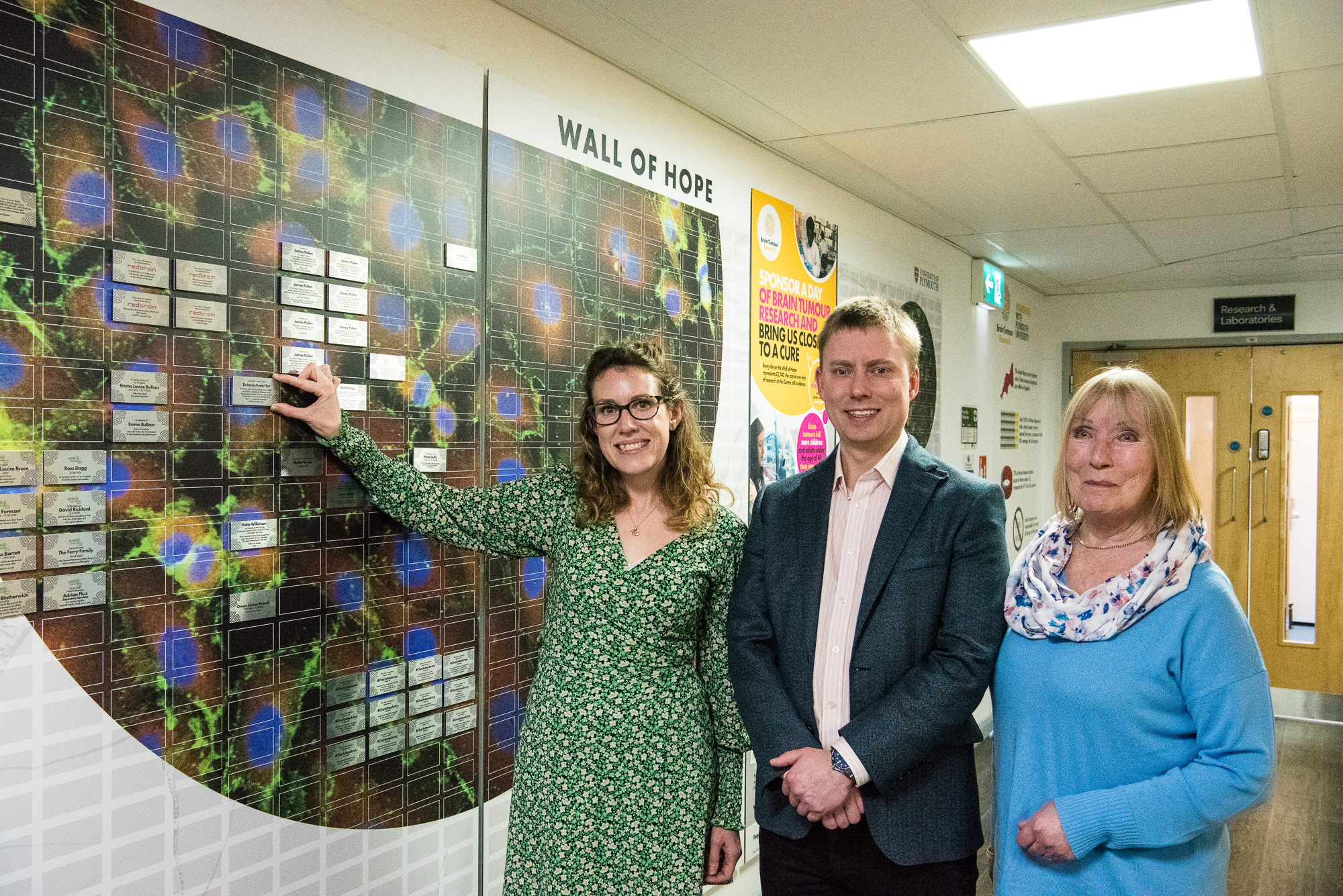 She said: “James and I were at the start of our married lives and careers when we found ourselves desperately seeking every possible treatment option we could just to keep James alive.

“Although he achieved the two most important things on his bucket list which were to make me happy and to complete his PhD, he had so much more to give and to live for. We have to find a cure for this most terrifying form of cancer.” 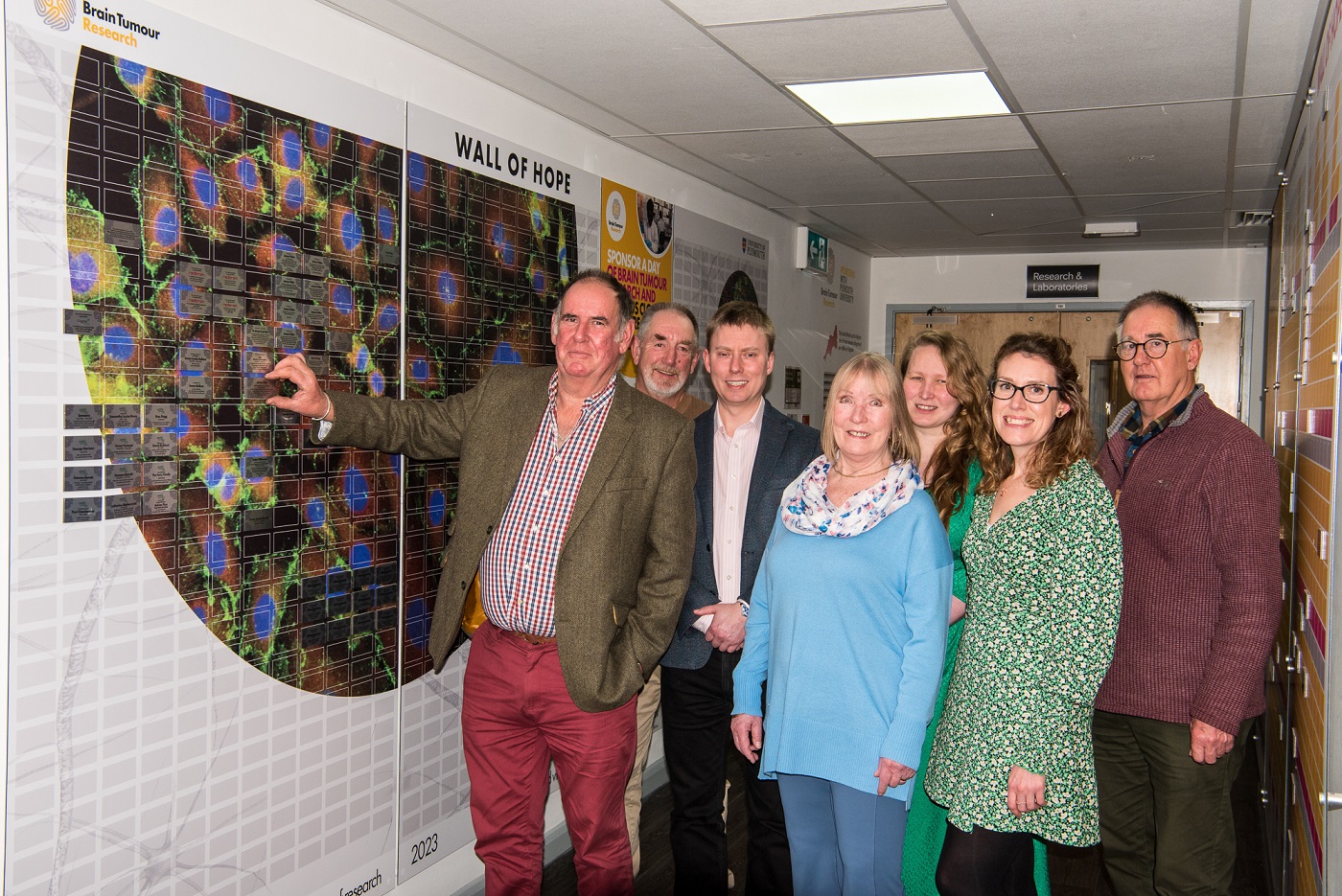 Martin also placed a tile as a tribute to Joy, having raised more than £3,000 when he illuminated his bungalow with 30,000 lights in his mum’s memory.

Next week, he’ll be switching on his lights again to once again to raise funds for Brain Tumour Research. 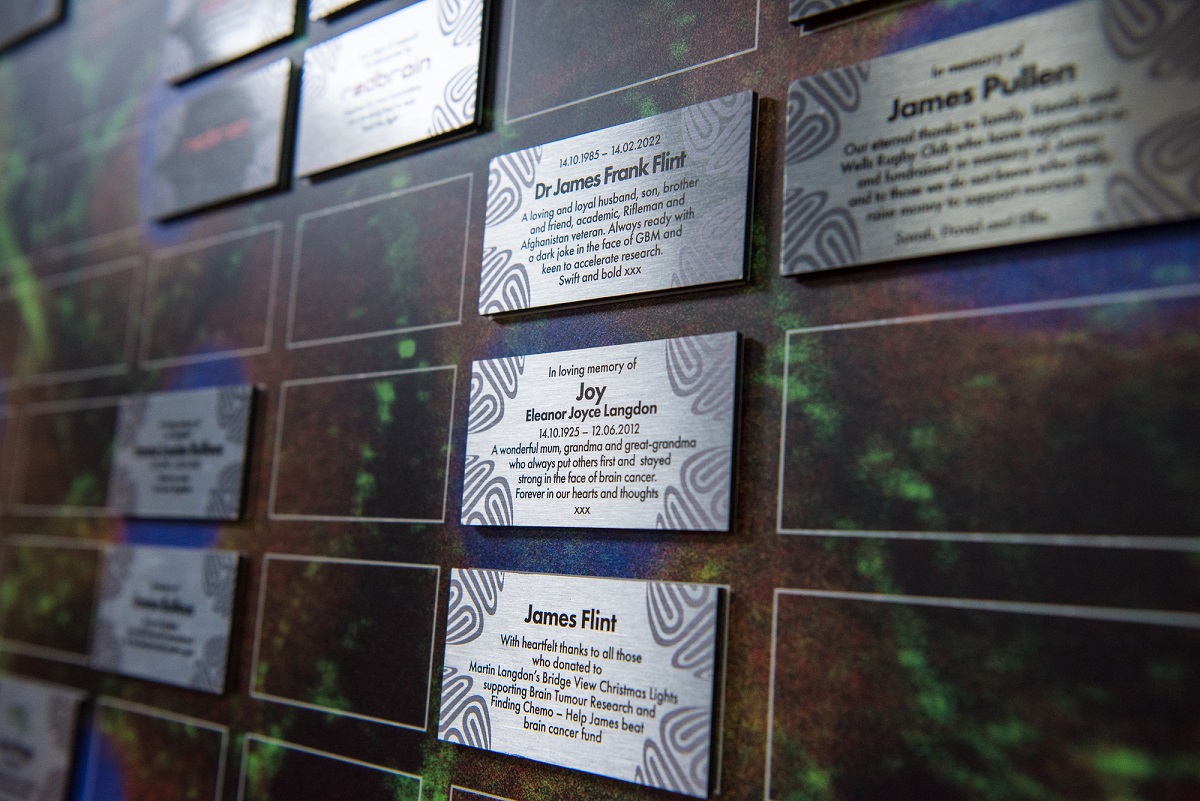 Tiles for James and Joy

One of the tumour types being researched at Plymouth is meningioma – the most common form of adult primary brain tumour. It’s the type of tumour that patient Victoria said caused her life to change “beyond all recognition” after she was diagnosed in 2016.

Victoria met Professor Oliver Hanemann, who leads the team at Plymouth, and learnt more about how the progress being made there could potentially spare patients risky surgery.

“It was reassuring to hear that research is progressing into meningioma and other low-grade brain tumours, and that scientists at Plymouth have had breakthroughs in the quest to find a cure,” she said. “I know that although I was told my brain tumour was slow-growing, there is the very real potential for it to grow back and it would be amazing if scientists could discover a way to stop or slow down the regrowth.” 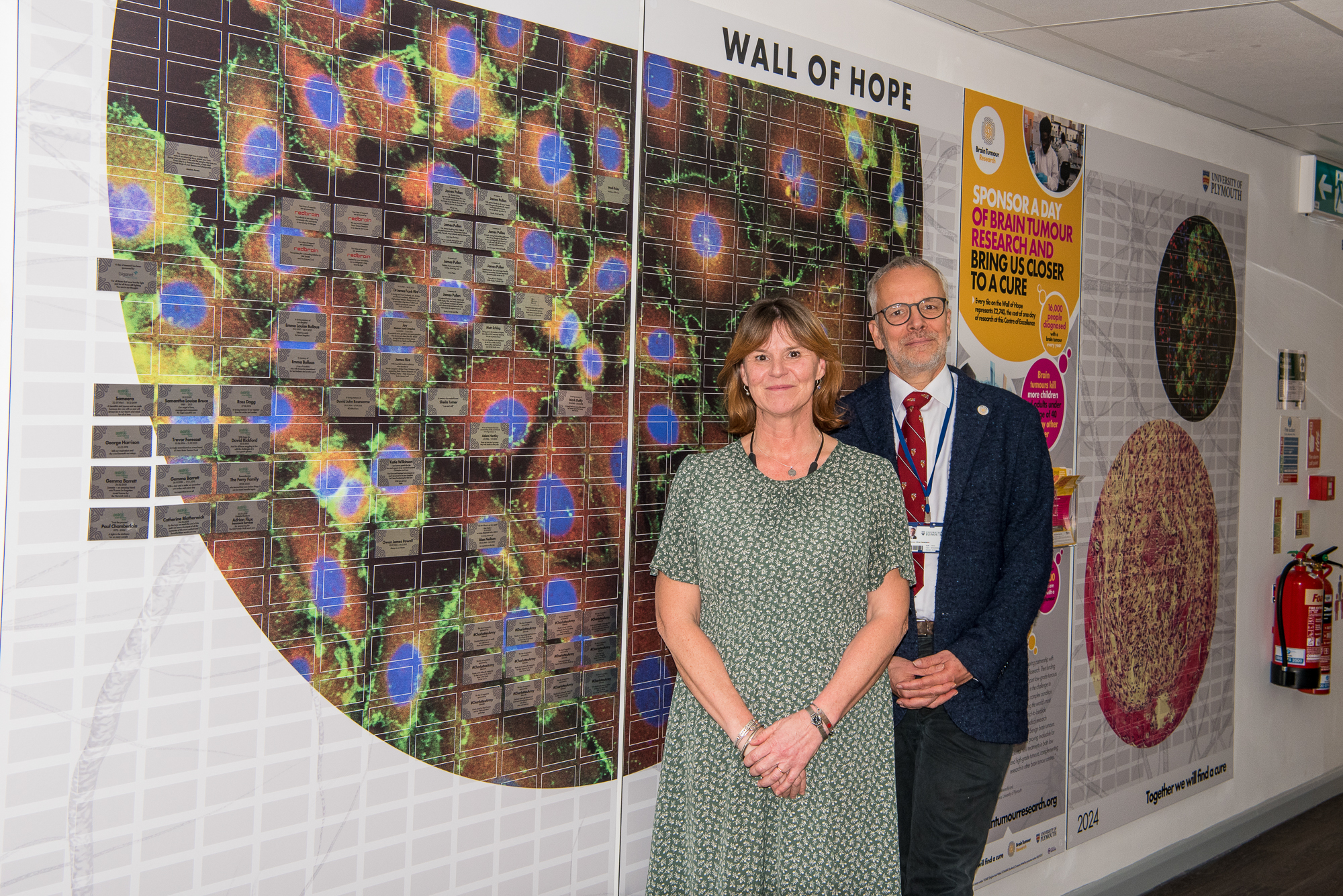 Cathy has been fundraising for Brain Tumour Research after her son Matt was diagnosed with an anaplastic astrocytoma in 2019. She raised more than £3,000 to help find a cure with activities including a garden tea party, an online quiz and placing collection tins around her local community. 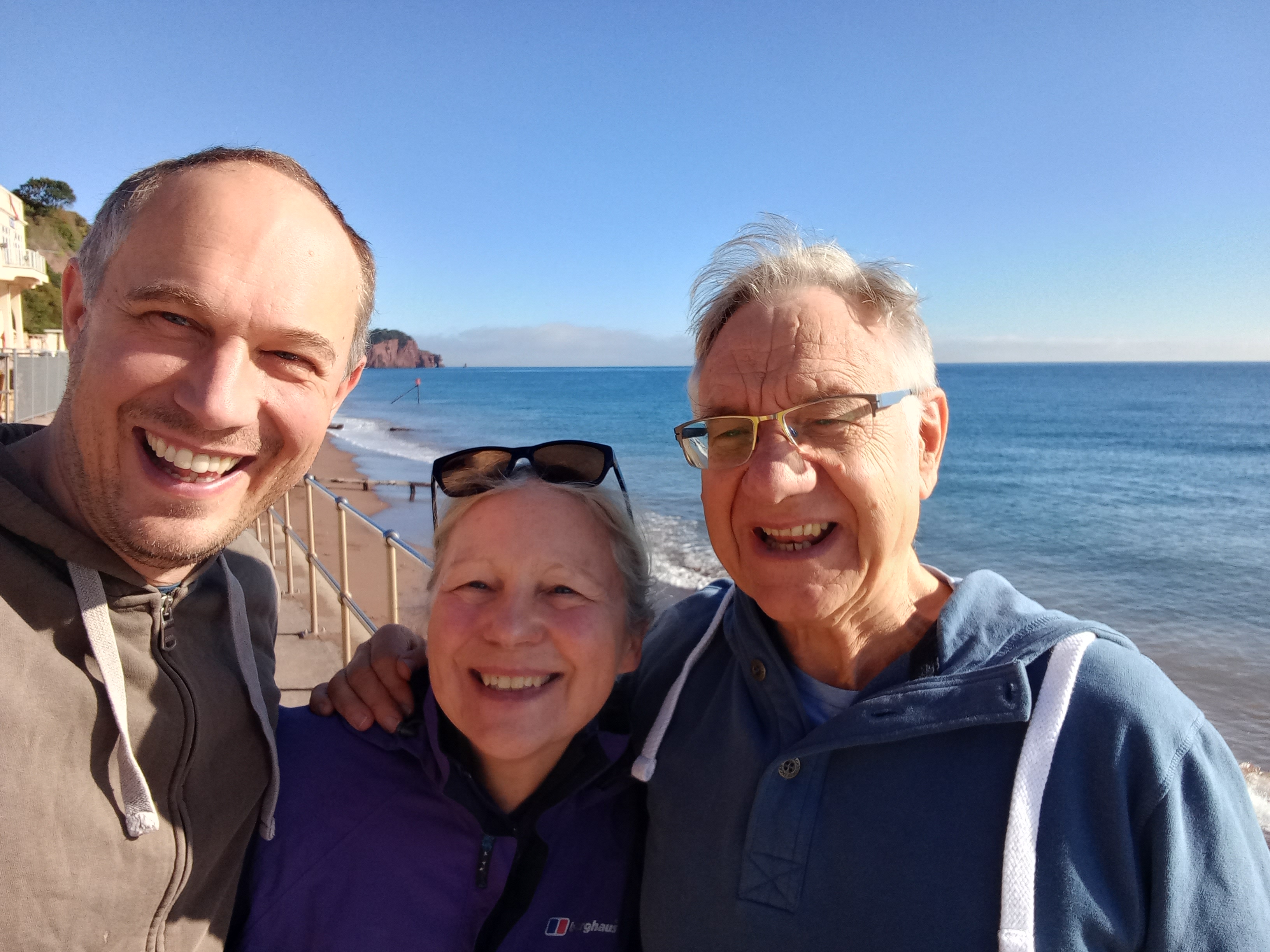 Accompanied by her husband Reinhard, Cathy placed a tile on the Wall of Hope. She said: “Matt is a true inspiration and we reflected this in the words on the tile we placed. He embraces life and is always so positive. He is such good company and makes everyone feel happy.”

She added that it was “heartening” to learn more about the work at Plymouth. 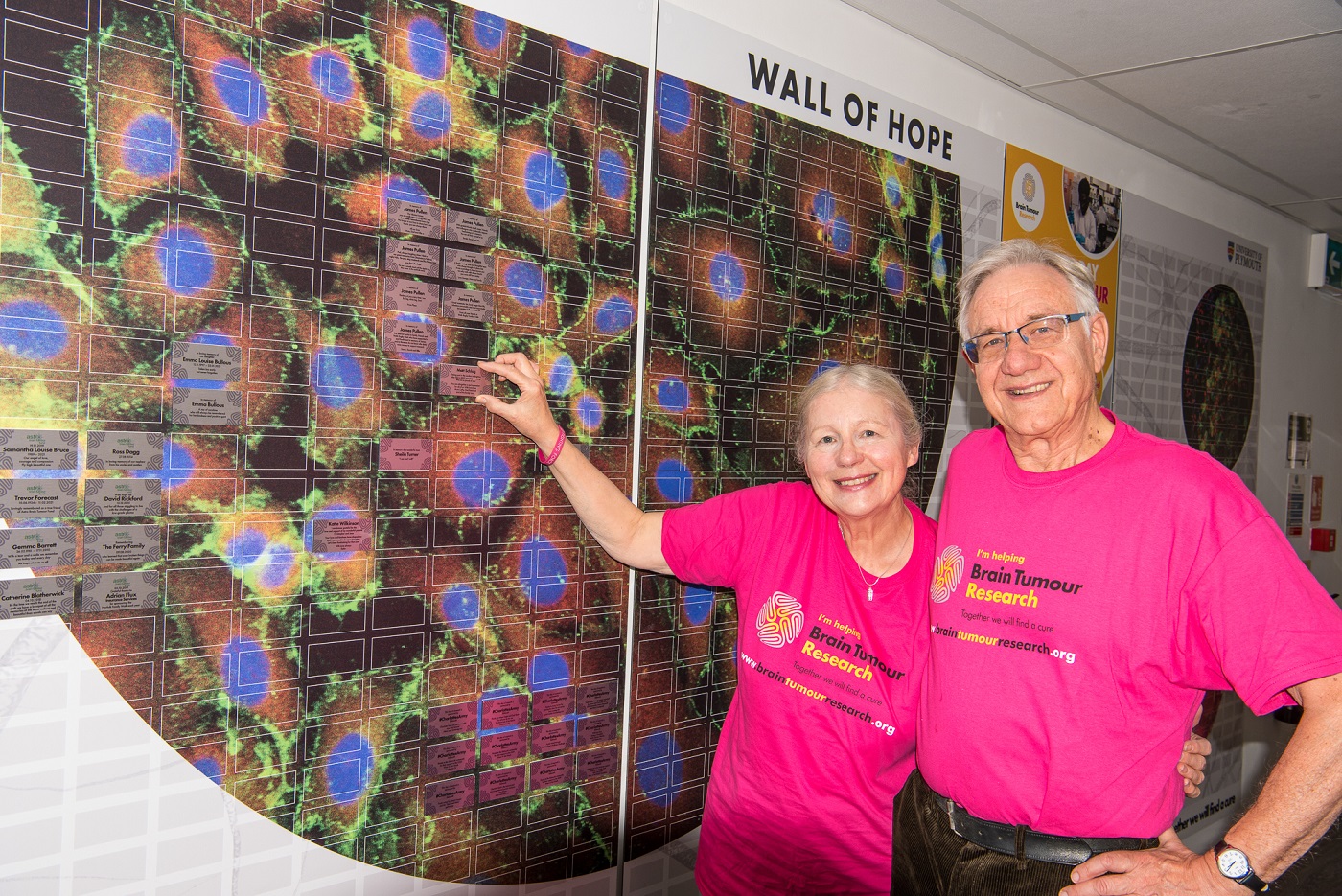 Cathy and Reinhard placing their tile

Susan said: “It was bad enough me being diagnosed with a brain tumour. I had a biopsy and then radiotherapy and chemotherapy and have regular scans to check that the tumour isn’t growing. I also have to take strong medication to stop me having seizures, which makes me feel very tired. But to then find out that Dave also had a brain tumour with a very poor prognosis, after he collapsed at home, was such a shock. He hadn’t had any symptoms and was driving a dustcart the day before.

“Anyone could be walking around with a brain tumour and not know it.” 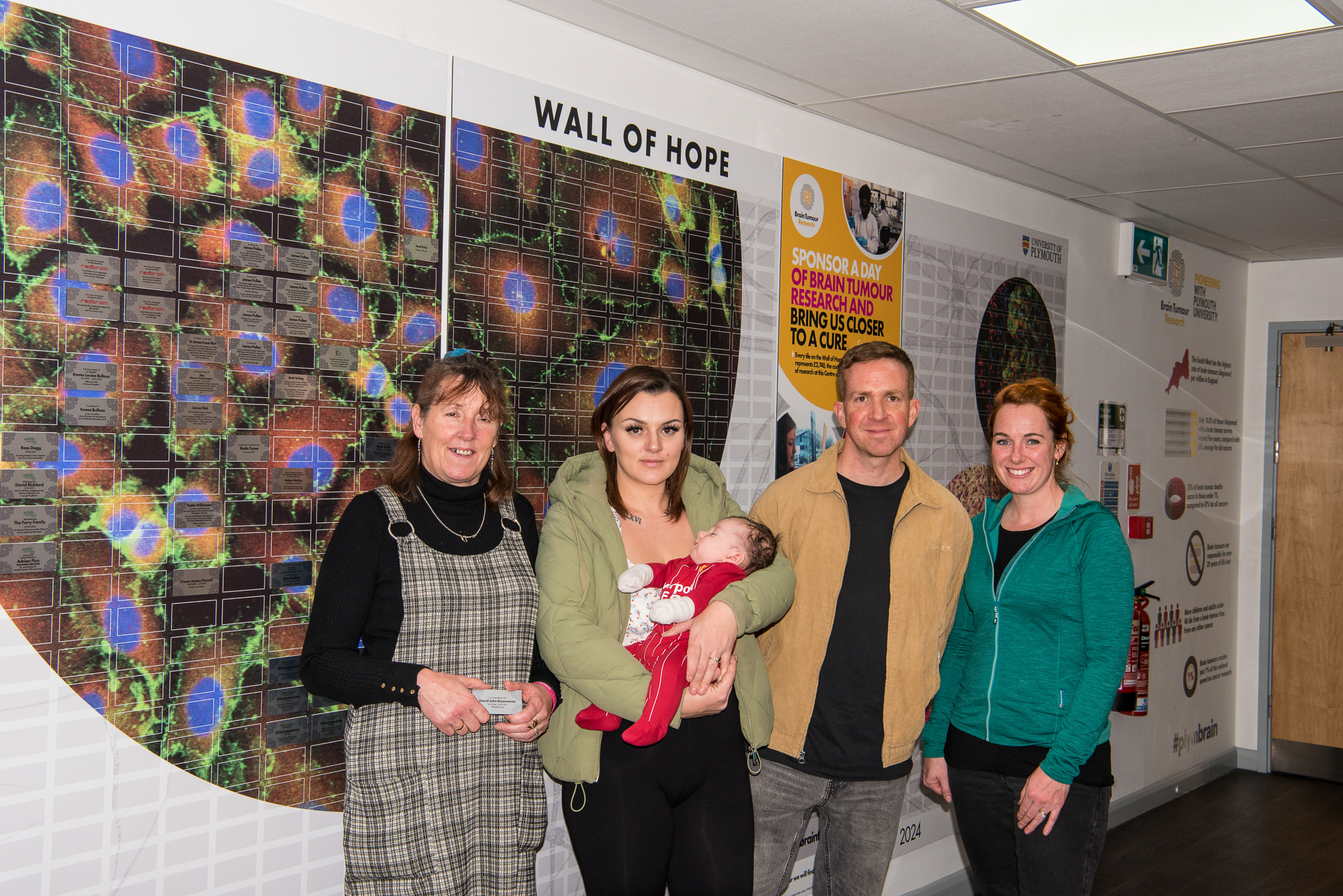 Gareth also attended, accompanied by his wife Annouska. He lost his sister, Charlotte, to a brain tumour in March, at the age of 42.

He said: “Charlotte was upbeat from the day she was first diagnosed until the day she passed away. She never moaned, complained or had anything negative to say. Even in her last days I remember her smiling, sat in her armchair eating pick ‘n mix while we were fighting back tears. How she kept so upbeat I’ll never know!”

We look forward to welcoming more supporters to our lab tours, with our next visit to our Centre of Excellence at Queen Mary University of London taking place later this month.

To find out more about sponsoring a day of research, visit www.braintumourresearch.org/sponsor-a-day