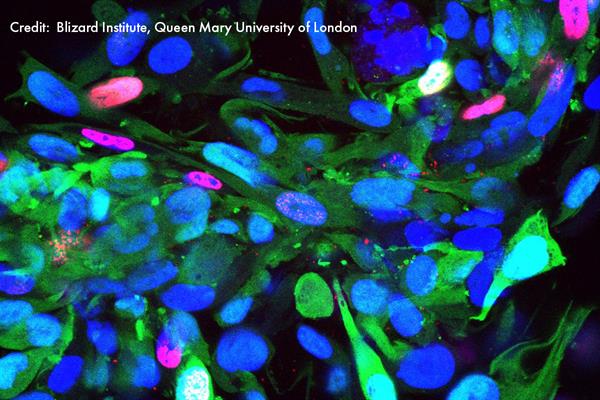 This week Brain Tumour Research returned to Westminster for the first face-to-face meeting of the All-Party Parliamentary Group in Brain Tumours (APPGBT) since the start of the pandemic.

In addition to an update on the inquiry, Pathway to a Cure – breaking down the barriers by our Head of Stakeholder Relations, Hugh Adams, attendees also heard from Hilary Duckworth, Novocure UK and Ireland Country Manager on Tumour Treating Fields for Glioblastoma patients.

So, what are Tumour Treating Fields?

Tumour Treating Fields (TTFields) are a cancer treatment approach that uses electric fields to disrupt cell division in cancerous cells, resulting in cell death. TTFields have been shown to be effective for solid type tumours, including glioblastoma (GBM).

How do they work?

Cancerous cells differ significantly from normal cells; they have undergone a unique combination of genetic, structural and electrical changes, as well having increased rate of cell division.

In normal cells, cell division is a tightly controlled sequence of events with check points and a maximum number of divisions per cell. Cancerous cells however, divide rapidly and uncontrollably leading to a mass of cells, forming a tumour that grows in size.

TTFields exploit this rapid cell division by delivering alternating electric fields to the mass of cells to disrupt the mechanisms involved in cell division, halting the process and inducing cell death.

In cellular investigations, TTFields have also been shown to:

What does the treatment entail?

The most widely used clinical TTFields delivery system for glioblastoma patients (Optune® by Novocure) consists of four ‘transducer arrays’, a field generator and a power source, which can be carried in a backpack or shoulder bag.

The arrays are attached in pairs at right angles directly to the patients shaved scalp.  Each array is made up of nine ceramic discs through which the field generator delivers alternating electric fields across the brain and to the tumour site.

The device must be worn for more than 18 hours a day and is to be used alongside the current standard of care for glioblastomas in the UK, which is surgical resection followed by chemotherapy (temozolomide - TMZ).

What are the treatment outcomes for TTFields?

Published in JAMA in 2017, clinical trial results demonstrated a median overall survival (from trial start) of 20.9 months for those in the TTFields + TMZ treatment group, compared to 16.0 months in the TMZ only group.

Are there any side effects from the treatment?

TTFields treatment has not been linked to significant system-wide side effects. The most common side reported at present is skin irritation beneath the arrays, which can vary in severity.

In addition, carrying the backpack with the power source and field generator in, is a consideration.

Are TTFields available to patients on the NHS?

No, Optune is only available privately in the UK, funded either through self-pay or health insurance. A clinical trial will be running in the new year, more information on this to follow.

More information on access to TTFields in the UK can be found here.