From Lola Pearce to Ada Lovelace 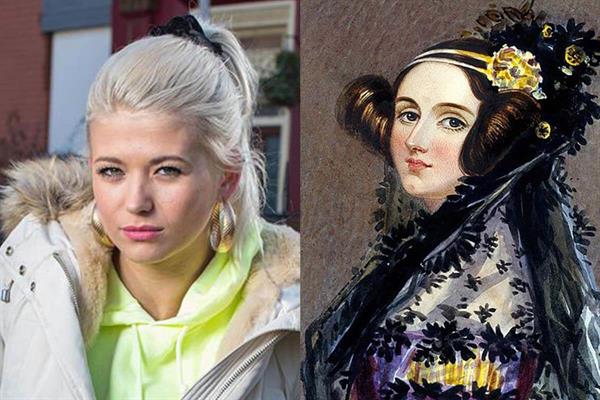 Brain Tumour Research is working alongside EastEnders and Macmillan UK on a storyline in which Lola Pearce is diagnosed with a brain tumour.

The storyline will begin this autumn as viewers see Lola (played by actress Danielle Harold) and her loved ones deal with her diagnosis.

Viewers will follow Lola, and those around her, on the journey through what she’ll be facing: the reality of being a young person who is diagnosed with a brain tumour.

Danielle said: “It means so much to be trusted with a storyline like this – one that’s close to many people’s hearts. Sadly, many of our viewers will be able to relate to Lola’s story, and it’s been heart-breaking to speak to the families affected by brain tumours and hear their stories. They’ve been so amazing in sharing their experiences with me, and I’m so lucky to have them. I wouldn’t be able to do this storyline without their support.”

EastEnders has worked closely with both charities on this storyline to ensure it is portrayed as realistically and as sensitively as possible.

Sue Castle-Smith, our Head of PR and Communications, said: “We are extremely grateful to EastEnders for helping to raise awareness of brain tumours. Brain tumours kill more children and adults under the age of 40 than any other cancer and, sadly, Lola’s story will be all too familiar to one in three people who know someone affected by this devastating disease.”

At Brain Tumour Research we are always keen to work with, and promote our cause, on the nation’s broadcaster and as well as on TV the BBC gives opportunities on their extensive local radio network. We spend a significant amount of time talking to regional BBC stations, and the producers and presenters who work there are a passionate, hard-working, and formidable bunch.

Many of you reading this update will have spoken on your local radio stations about your brain tumour stories. Thank you – people cannot support a cause unless they know it exists.

Brain Tumour Research marked Ada Lovelace Day on Tuesday by championing the fantastic achievements of our female researchers within our Centres of Excellence.

Lovelace, who died in 1852, is considered to be the first female computer programmer and Tuesday was an international celebration of the achievements of women in STEM (science, technology, engineering and maths). Its goal is to raise the profile of women in STEM, create new role models to encourage more girls into STEM careers and supporting women already working in this area.

Professor Silvia Marino heads up the research team at our Centre of Excellence at Queen Mary University of London. Within the last year, the team has had significant breakthroughs in both the study of glioblastoma (GBM), the most common primary high-grade tumour diagnosed in adults, and medulloblastoma, a primarily childhood tumour.  Her work is invaluable to the brain tumour research community and driving us closer to a cure.

Professor Marino acknowledges that it is challenging to be a woman in science: “At senior level, equality with men is unfortunately still not a given, and it is at times difficult to be heard and sometimes even to be taken seriously. It is important to believe in oneself and persevere.”

Dr Nelofer Syed leads the research team at our Centre of Excellence at Imperial College London studying the nutrients used in brain tumour metabolism. She led her team to a ground-breaking discovery identifying that arginine is used differently by brain cancer cells compared to healthy brain cells, and that it is possible to manipulate arginine levels to influence tumour growth.

Dr Syed was inspired in STEM by Professor Brigitte Askonas: “She was such an amazing immunologist but also a great person. She was always great with the students, encouraging them to be inquisitive and enjoy the journey of science and knowledge.

“She still inspires me to this day, even though she has passed away.”

Dr Syed’s workplace Imperial College London has been named The Guardian’s University of the Year.

Speaking to The Guardian, Professor Hugh Brady, President of Imperial College London, said: “Innovation and enterprise are really part of the DNA, they’re part of what attracts the students.

“The atmosphere is different: impact, innovation, entrepreneurship just ooze out of the institution.”

Professor Brady also suggested that there was now a deeper appreciation in society of the value of science, engineering and medicine, adding: “You can really argue that Imperial has never been more important to the country.”

At this time of a “deeper appreciation in society of the value of science, engineering and medicine,” we note that this week Greg Clark MP (Con, Tunbridge Wells) has been elected uncontested to the position of chair of the Science and Technology Committee, for the second time (Clark previously chaired the Committee from January 2020 to July 2022)

“I am delighted to be able to resume my chairmanship of the Committee and am grateful for the confidence and support of my colleagues across the House.

“And on Ada Lovelace Day, I want to recognise our vibrant and talented scientific community. I value the close engagement this role provides and look forward to hearing their ideas on what the Committee should investigate next in our My Science Inquiry.”

This week, our Policy and Public Affairs Officer Thomas Brayford attended Cancer52’s Annual All Stakeholder Event, which focused on inequalities for rare and less common cancers.

The keynote speech was delivered by Dr Bola Owolabi, Director of Health Inequalities at NHS England and NHS Improvement. Dr Owolabi spoke of the Core20 plus 5 initiative that is working to tackle inequalities in early diagnosis in rare and less common cancers. Many patients with rare cancers find themselves on the margins of discourse. The combination of equitable access and excellent healthcare, she said, will lead to better outcomes.

Dr Owolabi stressed the importance of early cancer diagnosis. An important part of this is listening to the patients and asking the important questions. She told the story of a patient who visited several GPs, fearing she had a brain tumour. Eventually, one GP asked: “So what do you think we’re missing?” Only then was the patient referred for further examination.

At the meeting, Sonia Malik, Head of Policy and Influencing at Young Lives vs Cancer and Chair of Cancer52’s Inequalities working group, launched Cancer52’s eagerly awaited report into inequalities. The report uncovers many examples of inequalities, for example women are more likely to be diagnosed with brain cancer via emergency presentation.

We welcome the report and urge stakeholders across government, healthcare, and social care to work together to remove the gaps that exist in outcomes for different people with cancer, particularly brain tumours.

As Sonia says: “All people with cancer must receive the best possible diagnosis, treatment and care, no matter who they are or where they live.”

Thomas, along with colleagues from the Scottish Cancer Coalition, met with Humza Yousaf Cabinet Secretary for Health and Social Care to discuss the upcoming Scottish Cancer Strategy. He asked the Minister what steps his Government were taking to increase awareness of potential signs and symptoms of brain tumours. The Minister responded by saying Scotland’s Rapid Diagnostic Centres would play a big part in this, to quickly diagnose or rule out cancer for those who do not meet existing Scottish Referral Guidelines for Suspected Cancer. The priority right now, he said, was also “to get through the backlog of the pandemic.”

The current average waiting time for PIP for people making a new claim in England and Wales is 18 weeks. It’s unacceptable that people living with cancer are facing a such a long wait to receive the financial support they need and are entitled to.

Each week their claim is delayed, those affected can miss out on up to £156.90. This shortfall comes at a time when people with cancer face potentially catastrophic increases to the cost of living, on top of a significant financial impact from their diagnosis.

Together we are calling for the UK Government to reduce PIP waiting times to 12 weeks, so that people with cancer get this support when they need it the most.

You can support the campaign in the following ways:

I am supporting Macmillan’s campaign calling on the UK Government to cut distressing waiting times for Personal Independence Payment (PIP) down to 12 weeks. PIP must reach people quicker at a time when they're struggling with the cost-of-living crisis. Sign the petition now: https://bit.ly/3SD0ZFn

Next week there will be news of a special book launch, a workshop for our researchers, letters to ministers and the date for the next meeting of the All-Party Parliamentary Group on Brain Tumours – the great news is that it will return to Westminster having been a virtual event for 2½ years.

Exciting times and it is great to have each and every one of you alongside us.

Last, and absolutely not least, our patient survey has received more evidence from you than we could have imagined possible. Thank you all so much for sharing, it shows how impassioned you are and how keen to feedback your individual experiences to improve the world for those currently, and in the future, affected by a brain tumour. It speaks volumes of your humanity. Thank you and if you’d like to add your thoughts then the patient survey is available to complete here until midnight on Sunday 23rd October.