Zoom with us and APPGBT review 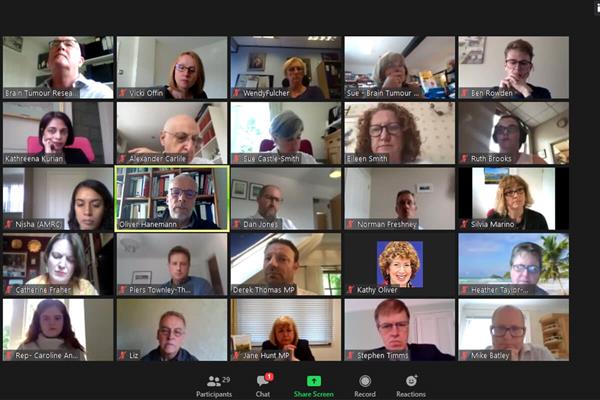 In last week’s blog we mentioned how we’d like to share our research news with you via a Zoom call and that we will be holding three virtual events where you can hear all about the research centre funding call from Dr Karen Noble and also be introduced to our Director of Income Generation and Development, Russell Marriott.

Here are the prospective times and dates:

Drop me an email ( hugh@braintumourresearch.org) letting me know which date you’d like to join us on and I’ll send over the Zoom invite.

We are really looking forward to this opportunity to join with you in a mood of optimism to share and discuss our future plans.

We’d like to welcome Steve Barclay in as the Secretary of State for Health and wish him luck in delivering a credible, fully funded & ambitious 10 Year Cancer Plan. We’d also like to thank Sajid Javid for his support of Wear A Hat Day ( see his supportive tweet here) and for his stated determination ‘to see ‘frontline’ brain tumour funding.’

Looking back over Sajid Javid’s tenure as Secretary of State, and also mentioning the use of Zoom for our virtual update, reminded us that almost exactly two years ago, we were planning for the first virtual meeting of the APPG on Brain Tumours (APPGBT).

At the time I wrote “we, in our position as the secretariat, have organised this for the APPG – to be honest I am a little nervous! We have all done what we can with attendees, agendas, briefing documents and a good deal of emailing and phone calls but now we are placing our fate and the successful running of the meeting in the hands of Zoom. Who will be the first person to start talking when they are on mute, is that MP frozen or just very still because they are listening intently?”

Those nerves seem a relic of a past time. The nerves have gone (except when it comes to sharing my screen!) and seemingly, just as we have all got slick with this previously strange format, we are in the process of, joyfully for some, returning to face to face meetings. That said we think the APPGBT will remain in a hybrid form going forward with the panel sessions for the APPGBT inquiry continuing to be held virtually.

At that meeting two years ago we heard from the Association of Medical Research Charities (AMRC) who illustrated the impact of Covid-19 on medical research charities by stating that up to £368 million has been lost from funding and that much early career research was now at risk.

Last week as we called for applications for a new Centre our Chief Executive Sue Farrington Smith MBE reflected on how Brain Tumour Research had bucked the trend saying “Thanks to our supporters, including many brain tumour patients and their families and those whose lives have been changed forever by this devastating disease, the year to June 2021 saw us deliver our best financial year yet. We emerged from a tumultuous year as a result of the COVID-19 lockdown with an income of £5.3 million, up 76% in the previous year. “

We are closing our 2021/22 accounts and our supporters have done it again and we have been able to raise even more, all of which will be reported in due course.

At the July 2020 APPGBT meeting Mike Batley from the National Institute of Health Research (NIHR) spoke on the theme of the £40 Million promised for brain tumour research in 2018 which was to be allocated through the NIHR.

He told the meeting that in 2017 there were 10 applications for brain tumour related research, in 2018 there were 27 of which 4 were successful, in 2019/20 there were 27 applications, so far 3 had been successful but there were 9 under consideration. He further explained to the group that NIHR is aiming to restart research as soon as possible following COVID-19 and that of the £40 million so far around £6 million had been invested for programmes (not infrastructure).

This figure has since been updated but remains significantly less than half of the money available.

Former Health Minister, Lord Bethell wrote to the Petitions Committee in June 2021 saying “In a House of Lords debate in January 2021, I advised “Although the £40 million for brain tumour research has not all been allocated yet, it is not going anywhere and we are working as hard as possible to ensure that the right kinds of research project are put forward for that money”. I also went on to say that I would like to see it all allocated as soon as possible.”

The successful and complete deployment of this £40 million remains a core tenet of all that Brain Tumour Research campaigns for and we have influential friends at Westminster making compelling arguments on our behalf. We have every confidence that this money will get into the hands of the researchers that are the key to unlocking the uniquely complex puzzle that brain tumours pose.

In order to propose solutions to the allocation of the NIHR money the November 2020 APPGBT heard from Consultant Neuropathologist, Professor Kathreena Kurian who spoke to the issue of the structural problems that researchers face in accessing funding. She highlighted that it is difficult to ascertain pure brain tumour research funding from generic funding for infrastructure and identified the problem as being “competing with different tumour types, targeted calls and rejection panels”.

Broadly, Professor Kurian highlighted three areas for policy change: 1) Experts – in a uniquely complex area, brain tumour research proposals aren’t considered by a panel that contains a brain tumour expert. The proposed solution is the establishment of a pool of brain tumour grant panellists of different seniority grades, balanced genders, ethnicity and sexuality, if possible, to represent the full range of expertise and new grant ideas, rather than ‘established experts’ drawn from a wider expertise pool 2) Process – even if deemed fundable a brain tumour research application will then be ranked against all other fundable projects with no fast tracking to the money being made available. A proposed solution is to change the system so that if a brain tumour grant is deemed fundable by a panel, it is automatically funded during a highlighted brain tumour funding round 3) The rejection of proposals can lead to the brightest minds being lost to brain tumour research. It takes researchers a significant amount of time and scientific rigour to write these applications, which could be seen as poor use of valuable research time if they are to be rejected in manner leading to dejection. Dr Kurian mentioned at the APPG that she had a funding proposal rejected by the NIHR, and that news of this was relayed in two lines of curt text. This could be mitigated by the creation of a register of ‘priority’ previously rejected brain tumour researchers who can be targeted with grant workshops, grant writing skills so they are not lost to the field.

Professor Kurian’s ideas on policy change are still on the table for discussion and we thank her for her hard work and vision in supporting better access to research funding. In a welcome move the Department of Health and Social Care (DHSC) and the Tessa Jowell Brain Cancer Mission (TJBCM) facilitated two free webinars aimed at increasing the number of successful funding applications in brain tumour research. They were held on 5th and 7th October 2021 and provided an overview for researchers of current funding opportunities and how to create a successful proposal. Brain Tumour Research were pleased to speak at the event. The fact remains, though, that if the NIHR continues to appear to be a barren pathway then other avenues for money to flow for vital research will need to be explored both by the APPGBT and, acting independently, by Brain Tumour Research.

In March 2021 the APPGBT heard from the TJBCM, and in particular they heard about their newly designated Tessa Jowell Centre of Excellence designation initiative – an exercise designed to recognise and award neuro-oncology centres for their excellence in patient care. Queen Mary University of London, where we have a Research Centre, has strong links  with Barts Health NHS Trust who were in the original tranche of centres announced at that meeting and in May this year we were pleased to announce a similar accolade for Imperial College Healthcare NHS Trust – home to another of our Centres.

At the May 2021 meeting, we presented to Parliamentarians on the Brain Tumour Research petition and the resultant report – ‘Stop the Devastation.’ The petition received 112,260 signatures and we updated attendees that we were awaiting the Prime Minister to receive the report.

In July last year a presentation from the APPGBT Chair (Derek Thomas) and the secretariat (Brain Tumour Research) announced the launch of the APPGBT inquiry – ‘Pathway to a Cure – breaking down the barriers.’

The Wanted singer Tom Parker opened the December 2021 meeting speaking about his own diagnosis with a glioblastoma multiforme (GBM) in October 2020. He expressed his frustration at the lack of options for brain tumour patients and spoke about the “truly horrific” nature of his gruelling chemotherapy and radiotherapy treatment

In March this year Tom Parker died from his brain tumour

In the same month we reported back to the APPG that in the last 18 months, 58 brain tumour related questions had been tabled, 17 on the government funding levels, 9 on supporting research, 13 on treatment and support and 1 on diagnosis.

Over the past two years 36 Parliamentarians have attended meetings of the APPGBT with others sending representatives.

That is over 5% of MPs – there are over 350 APPGs for them to choose from plus all of the other Parliamentary business to claim their attention.

The past two years have been tumultuous for all of us but Brain Tumour Research has survived and grown, and the APPGBT has grown in influence and impact from meeting to meeting with the inquiry report to be a huge milestone at the beginning of 2023.

With all of the changes in the past two years something that hasn’t changed is the prognosis of a patient diagnosed with glioblastoma multiforme.

It is sobering to think that someone yet to be diagnosed at the time of the first virtual APPGBT may have died from the disease before our most recent AGM in May.

That is why we do what we do.