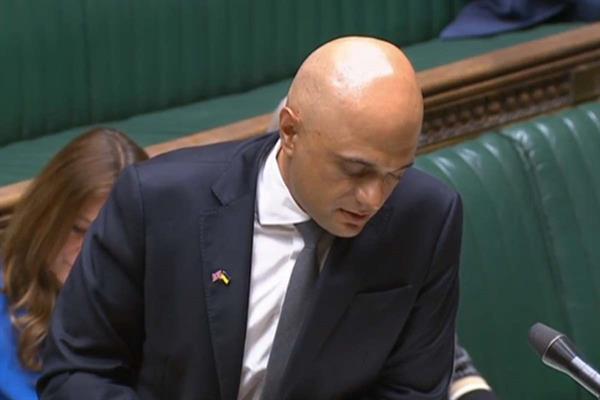 We have had a bumper couple of weeks for adding new members to our campaigning database. Thank you for joining with us to make a difference for everybody affected by a brain tumour.

She told us “We lobbied our MP, Holly Mumby-Croft, who, on 27th January 2021, spoke about Dave’s diagnosis in parliament and raised a Prime Minister’s Question (PMQ) about whether the PM would work with Brain Tumour Research to help improve research and treatment options for patients like Dave. She highlighted that while the Department of Health is working with charities on addressing the issue, there is still much more to be done.”

“We know that only through research will we get new medicines to treat brain tumour patients and that is what we so desperately need. I believe brain tumours are a unique challenge and that calls for a unique approach, bringing us new answers, and so I place a lot of faith in the current APPGBT inquiry and I’m immensely proud that, through my lobbying of her, my MP Holly is a member of the inquiry panel.

We asked Holly Mumby-Croft MP to comment on Nicki and she told us; “We are reliant on our constituents to let us know what is going on in their lives and how, as MPs, we can work to change things for the better. I was immensely moved by Nicki and Did’s story and I cannot imagine how difficult it must have been for them and their family. Through talking with Nicki I was able to find out more about the need for adequately funded, dedicated brain tumour research in the UK and this led me to taking an active part in the All Party Parliamentary Group on Brain Tumours (APPGBT) and I am proud to also be a member of the APPGBT inquiry panel that is looking to find the pathway to a cure.

“I entered Parliament to make a difference and although I knew little about brain cancer before I met Nicki, it is now a subject I feel strongly about and although it is a tragic story of loss, I am glad to have learned about Did and his family. I continue to be committed to doing what I can in his memory and as a legacy to all of those lost prematurely to this devastating disease.”

Holly’s work on behalf of the brain tumour community continued on Tuesday when the Secretary of State for Health and Social Care, Sajid Javid, was questioned by MPs at Westminster and she took the opportunity to ask him about funding for research into brain tumours.

Mentioning Did, she told the Secretary of State that, alongside early diagnosis, improved access was needed to the £40 million brain tumour research funding made available by the Government in 2018. She asked Sajid Javid if he would read the inquiry report of the APPGBT (which will be released in early 2023) and if he will do all he can to speed up access to the £40 million.

His reply was that: “I will of course read the APPG report that she referred to” and that “I am determined to ensure the funding that we’re investing in this vital area of research is going straight to the front line”.

At Brain Tumour Research we are committed to identifying and removing any barriers to the deployment of all of this £40 million – we know that currently less than 25% of this money has been allocated – and are very grateful to the politicians who support us in this endeavour, and our campaigners who tenaciously and persistently lobby them.

We did know this question to Sajid Javid was coming as Holly was in touch with us about it before Tuesday and we were pleased to provide assistance.

Because we are a campaigning as well as a research funding charity, we posted about this Westminster Q and A on our Latest News page and on our social media platforms provoking high levels of engagement. This engagement was generally positive but there were comments on our Facebook page that gave a sense of despair and disbelief that anything would change. We understand this, of course we do, brain tumour patients and their families don’t have the luxury of time and have in the past felt ignored, overlooked and impotent but as campaigners we believe things will change because that is why we do what we do. We have been campaigning for greater investment in UK brain tumour research since we launched in 2009 – despite resistance along the way and we are finally being heard.

We believe the Secretary of State wants the full £40 million in the hands of researchers looking to find a cure – the money is ring fenced, it isn’t going anywhere but the fact it has yet to be deployed is a source of great frustration.

But it is an opportunity.

The APPG inquiry will uncover the barriers and propose solutions.

At the inquiry launch Chair of the APPGBT, Derek Thomas, said that the aim of the inquiry will be to provide clear recommendations and an action plan to address barriers and to seek to move from “talk to action”, focusing on solutions rather than problems.

This very week we are sending a letter to an influential parliamentarian proposing a way forward with deploying the remainder of the £40 million.

Parliamentarians are with us, there is no political ill will to increased brain tumour research funding, as the past year in particular has demonstrated the reverse is true:

When the PM or the Secretary of State say they want to improve the situation they really do but it is up to us, as campaigners to show them how to do this so they can then send the instructions onto the departments, and bodies under their jurisdiction.

New data from the Association of Medical Research Charities (AMRC), of which Brain Tumour Research is proud to be a member, shows a fall in the amount of money charities are spending on medical research, although AMRC members remain the top public funder of medical research in the UK.

A report released shows that in 2021, AMRC member charities spent £1.55 billion on research in the UK, out of a total charitable investment of £2.4 billion.

Nicola Perrin, CEO of the AMRC, said: “The financial year of 2020/21 was predictably difficult for the sector. The pandemic’s impact was as we projected, severe, with a shortfall of £260 million in research spend mainly caused by the hit to fundraising income.

“This has forced our charities to re-forecast their research spend over the next few years and many have had to make difficult decisions. Over a third of our members have had to cancel or cut funding for early-career researchers and research into new treatments.

“We’re seeing encouraging signs of resilience and recovery, with more charities increasing their research spend and over a third saying their spend had not been affected or had already recovered. Unfortunately, though, for many there is still a long way to go.”

Dr Karen Noble, our Director of Research, Policy and Innovation, said: “It is a tribute to our sustainable funding model, that despite the challenge posed by the pandemic, Brain Tumour Research was able to maintain support for all our Centres of Excellence, although we know this is not the case in other funding models.

“It’s thanks in no small part to the tenacity of our supporters and our ability to adapt and innovate that we were able to continue investing in ground-breaking research at our Centres. We are now looking forward to continuing to build our research capacity and inviting applications to establish a new Centre later in 2022”

A simple language test devised by researchers at the University of Edinburgh could help diagnose brain tumours earlier.

The “Noah’s Ark” task asks participants to name as many animals as they can in 60 seconds and could help GPs identify patients with common symptoms such as headaches who are most likely to have a brain tumour, the study suggests.

Funded by The Brain Tumour Charity, the study involved 270 people. Those with brain tumours were found to have significantly lower scores than those presenting with headaches but did not have a tumour.

The test is already used in assessing cognitive function for patients with neurological conditions – including brain tumours – but researchers say this is the first time it has been investigated as a way to speed up the diagnosis of brain tumours.

This is a welcome development on the route to earlier brain tumour diagnosis. However, to deliver real patient benefit, an earlier diagnosis must then be supported by access to treatment options, therapeutic choices and where possible placement on clinical trials. For this to happen there needs to be investment in the early-stage science that begins the translational pipeline and underpins all clinical innovation. Funding and campaigning to secure this investment is, and will remain, the bedrock of Brain Tumour Research.

We will be at British Neuro-Oncology Society (BNOS) Annual Meeting in Liverpool next week; we are a conference sponsor. There won’t be a campaigning update next week but please do keep an eye on our Latest News page as the Young Researcher Award, of which we are a co-sponsor alongside BNOS, will be announced on Friday and there is sure to be other news coming out from the conference rooms.

As Sue Farrington Smith MBE, our Chief Executive, said last year: “We are proud to co-sponsor the Young Investigator Award with BNOS. It is so vital that young researchers are encouraged to remain in the field of brain tumour research as they are the future and will unlock this complex puzzle, getting us closer to a cure for this devastating disease.”

Indeed, it is researchers that bring hope but it is the campaigners and fundraisers who enable the researchers to do that.