Pedal to the metal to find a cure 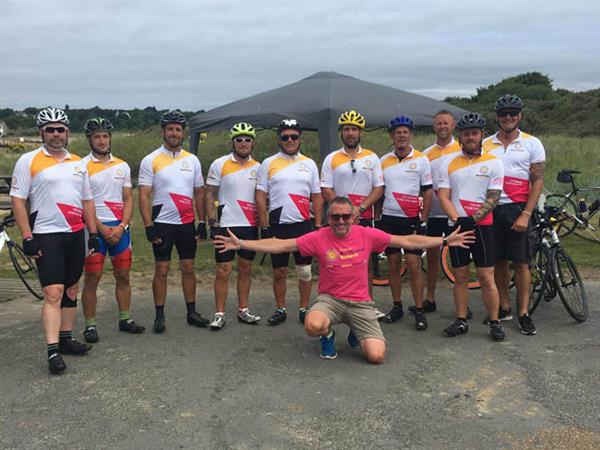 Ever since his best friend was diagnosed with a brain tumour, Simon Tier (pictured in the foreground in the pink t-shirt) has raised awareness and funds for Brain Tumour Research – his total to date stands at more than £40,000. During Bike Week, Simon shares why he supports the charity and how he organises an annual randonnée on the Isle of Wight.

I have always enjoyed mountain biking, never understanding the attraction of “skinny wheeled bikes” or MAMILs (middle-aged men in lycra). But 11 years ago, my best friend was diagnosed with a glioblastoma (GBM) brain tumour and it was so shocking to learn that we were going to lose Alan. His survival prognosis of 14 to 18 months was so brutal. In fact he ended up living almost another five years, but five years when you’re only in your 40s is rubbish.

As well as being my best friend, Alan and I were best man at each of our weddings, godfather to each other’s children and, on top of this, we were colleagues who worked closely alongside each other. Our lives couldn’t be much more closely intertwined.

Faced with the awful statistics on brain tumours, I resolved to play my part in trying to make a difference and in 2012 I was gifted the opportunity to take on the iconic Land’s End to John O’Groats route – a 1,000-mile cycle in 12 days. As I was still very much a mountain-biker, I didn’t buy a road bike, but instead borrowed one from a family friend, and put in the training on distance and endurance. I set up my first JustGiving page and was delighted that, before handing my loan bike back, my first road cycle fundraising challenge had raised more than enough to sponsor a day of research for Brain Tumour Research.

My second foray into road biking came a year later when I was invited to be a fresh pair of legs in the last leg of a 440-mile cycle from Lizard Point to Dover. My job to complete the last 140 miles from Fareham to Dover was the impetus to go out and buy a skinny wheeled road bike and my new obsession was born! I also discovered that putting in more frequent miles was powerful therapy, really helping me to de-stress.

Fast forward a few years to 2016 and we lost Alan. It’s not until someone close to you is diagnosed with a brain tumour that you realise what a devastating and indiscriminate disease this is. It is awful.

I looked around to see what I could do long-term to help bring about better outcomes for brain tumour patients and in 2016 tested the waters with my first take on a randonnée on the Isle of Wight. It took place in February as part of Brain Tumour Research’s On Yer Bike challenge. 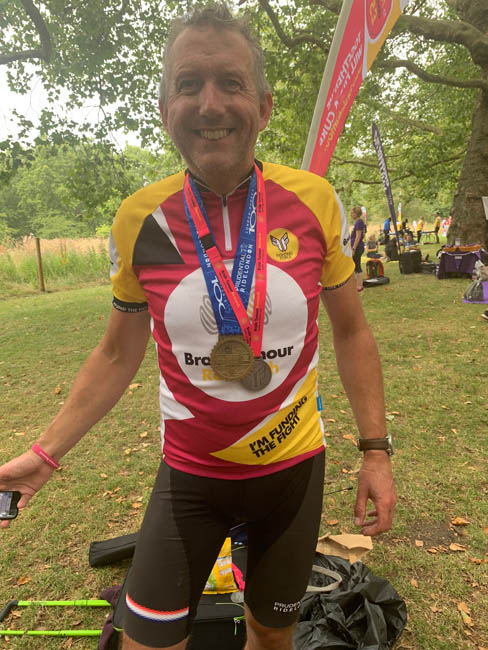 The feedback was good – it was generally thought to be a brilliant challenge but that the Isle of Wight would lend itself better to a summer event. The southern side of the island is so exposed and the winds, especially in winter, can be pretty brutal.

Since that first event, the Brain Tumour Research Randonnée (as it became known) moved to a new position in the fundraising calendar in July and apart from a forced break in 2020 because of the pandemic is now a regular challenge event with 2022 being the fifth such. The first Randonnée featured brain tumour patient Shaun Turner who recruited a small team to cycle with him and was responsible for raising half of the funds raised.

The Brain Tumour Research Randonnée offers cyclists two options – the first to clip in for the 68-mile clockwise round-tour of the island, climbing 4,000 ft and taking in multiple beauty spots and sights including the iconic Needles (a row of three stacks of chalk rising 99 ft out of the sea). And the second – the ultra, giving you double the fun – 68 miles twice, once clockwise and once anti-clockwise!

Last year, we were just getting used to the new normal after not being able to get out. Helped enormously by the indomitable Mel Tiley, community development manager at Brain Tumour Research, who spoke to the almost 100 sign-ups, encouraging them to tell all their friends what they were doing and to set up a fundraising page, we raised more than £15,000. Mel took a massive burden away from me, leaving me to do what I am good at: getting the logistics together, finding sponsors and making the Randonnée happen. I am determined to lean on the charity as little as possible, although I am certainly not turning away the offer of support from the charity this year in the shape of Deb Gascoyne! 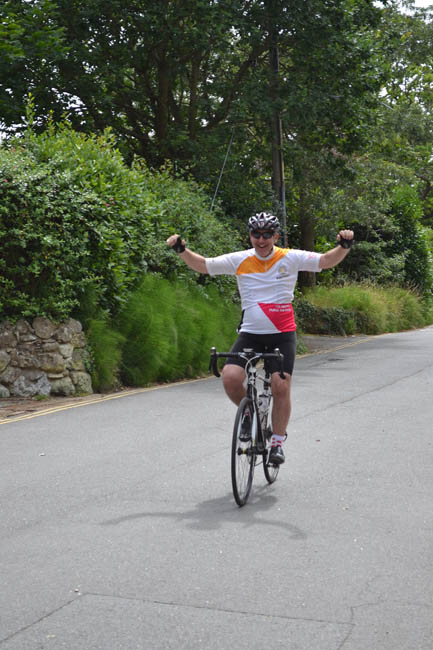 We are indebted to all our sponsors who help us provide complimentary refreshments, including the Alpaca Chatter Café in Yarmouth whose owner Neil lost his brother Michael to a brain tumour in 2008. We have suppliers, including Morrisons who provide drinks and refreshments at the first checkpoint, sponsoring the event. At the second checkpoint, riders can enjoy tea, coffee and home-made baked goods, while soft drinks and baked goods are offered by the aforementioned cafe at checkpoint three. Finally, at the end we have protein shakes, recovery bars and of course medals!

We have also managed to negotiate a 20% discount from Wightlink Ferries.

All in all, holding the Randonnée on the Isle of Wight gives the event the novelty factor and a grand sense of occasion as there’s the boat trip to get to it. Timing-wise, just before the beginning of the school holidays is good as is the fact that we know that there’s not much else happening on the island just then. You wouldn’t hold a cycling event near Bristol or Wells when the festival is on at Glastonbury, conversely we time this to be a few weeks after the Isle of Wight Festival.

Finally, I can’t underestimate the support from my cycling club, Fareham Wheelers, of which I am the club captain and responsible for organising the Sunday rides. Some of the members take part in the Randonnée and others provide dynamic marshalling. It’s great to have experienced club riders out with people new to cycling.

I’m looking forward to a fun-filled day, for this year’s Brain Tumour Research Randonnée which takes place on Sunday 3rd July, starting at 9am. 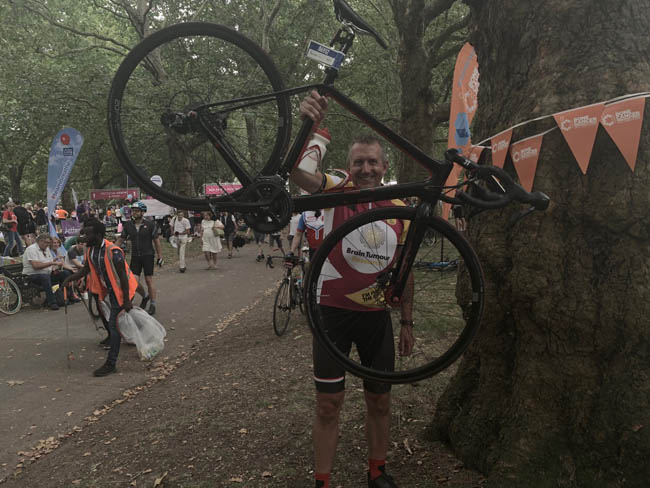 As long as I’ve got the strength, I’ll keep going with my support for Brain Tumour Research. We have to find better outcomes for brain tumour patients as a legacy for Alan and several other friends I have lost since his death to this terrible disease.

If you are inspired to sign up for either the Standard or the Ultra Isle of Wight Randonnée go to https://www.braintumourresearch.org/fundraise/take-on-a-challenge/event/2022/07/03/take-on-the-challenge/isle-of-wight-randonnee

You’ll be sure of a big welcome from me, a fundraising pack, dedicated fundraising help, PR support where applicable, the discount for the Wightlink Ferries and a special finisher’s #FightingForce medal!

If you’re not a cyclist and would rather sponsor me, you can do so at www.justgiving.com/fundraising/simon-tier