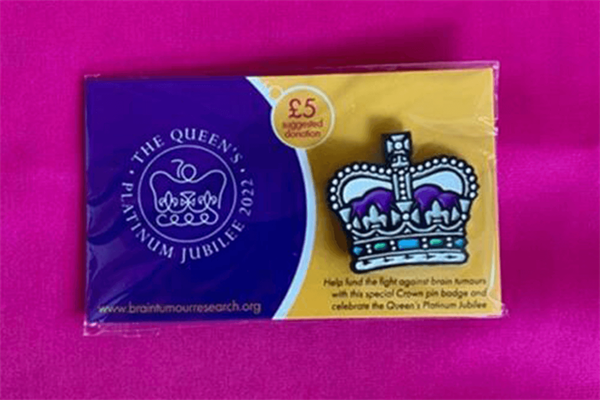 Following lobbying from Brain Tumour Research campaigners many MPs showed their support of our cause at Prime Minister’s Questions on Wednesday. Glimpses could be caught across the chamber of MPs sporting our limited-edition pin badge for the Queen’s Platinum Jubilee with some of our badge wearers getting a chance to question the PM personally.

Although the main topic up for debate was the Sue Gray report which was released that day we are proud that so many Parliamentarians also chose this PMQ, coming as it did before a period of recess, to show their support of Brain Tumour Research and we’d like to thank all of our campaigners who urged their MPs to wear this badge with pride. As well as the badge wearers in the chamber, further MPs pledged their support on social media and others sent supportive emails back to you – a really valuable MP recruitment exercise that we delivered together.

If you would like to order a platinum Jubilee badge the link is here but to make sure that you receive the badge before the royal Bank Holiday please place your order before 19:00 on Sunday.

The All-Party Parliamentary Group on Brain Tumours (APPGBT) held a fifth oral evidence session on Tuesday as part of its ongoing inquiry, Pathway to a Cure – breaking down the barriers.

Tuesday’s witnesses represented the pharmaceutical industry and were Northwest Biotherapeutics, QV Bioelectronics, Extruded Pharmaceuticals and Oncologica. Areas of expertise and discussion were immunotherapy, drug delivery, genomics and an implantable electric field device for the treatment of glioblastoma and other brain tumours.

The roles of the Government, the NHS and Universities were scrutinised in a lively session that gave panel members much to ponder and led to a series of recommendations that are likely to form part of the inquiry report that will be delivered early in 2023.

The next oral evidence session for the APPGBT inquiry will be in June, when charity funding for brain tumour research will come under the spotlight.

A one-off collection of hats inspired by the seven decades of The Queen’s reign is to be auctioned in aid of Brain Tumour Research.

The collection, which is entitled “Hats Fit For A Queen” and includes pieces by Royal milliners Stephen Jones OBE and Rachel Trevor-Morgan, have been specially created in association with the British Hat Guild, Epsom Downs Racecourse and Go Epsom and is being auctioned online until midnight on Sunday 12th June.

The hats will be displayed in the Queen’s Stand at Epsom Downs Racecourse for both days of The Cazoo Derby on Friday 3rd and Saturday 4th June.

Find out more about the Queen’s Jubilee Hat Auction for Brain Tumour Research and see the beautiful hats here: www.braintumourresearch.org/fundraise/jubilee-hat-auction

We have a very long standing relationship with the millinery world Philip Treacy is  patron and our support at Epsom was made possible by our great friend Stephen Jones who is Chairman of The British Hat Guild. The Epsom Derby is also a big day for the oldest shop in London, the oldest hat shop in the world and purveyors of the best top hats Lock & Co Hatters and they have been supporting us for a decade now as has the Queen’s milliner Rachel Trevor-Morgan

It’s not just in the millinery world we have long standing relationships, it is in our team too. I joined Brain Tumour Research in 2010 and already in place, alongside Sue our Chief Exec, was Liz from our PR team, and a trustee then, and now our National Events Manager, Carol, was on the team too. After I joined came members of the Marketing, PR, Finance, Office Management and Supporter Care teams who have now been with Brain Tumour Research for over seven years. So as we grow and bring in new team members with new expertise the core of the charity is loyal to the cause which, for all of us, is personal. It is a culture of staff retention of which we are very proud and it spreads into other areas too.

When I joined the charity at the first networking event I went to I met James Potter (aka The LinkedIn Man) and we have remained in contact ever since. In memory of his father, Anthony Potter, who died from a brain tumour in September 1988, aged 50 James has just taken on an epic cycling challenge to raise funds for Brain Tumour Research.

Before heading off James said “I’m attempting to cover 220-miles and it will undoubtedly be my biggest personal challenge to date. The route takes in a lot of hills with more than 85% of it off-road. Training is hard but it’s going well and I’m now up to 100 miles off-road a week and increasing steadily – a massive step up from my normal 20 miles a week!

“My motivation is that I wanted to make a difference and to do it in Dad’s name is an honour. He’s always in my thoughts. I’ve also known friends lose their lives to this awful disease and I’m keen to raise awareness of the fact that brain tumours kill more children and adults under the age of 40 than any other cancer and that the incidences of, and deaths from, brain tumours are increasing year on year.”

On Thursday he wrote “Today my legs ache, my hands have blisters (I didn’t train for three days of riding in the rain!), and let’s just say I am saddle aware :/ I cannot quite believe it but today is the final day of my mad 220 mile off-road bike challenge.

“I think I will find today hard, partly as my body wants to stop, partly as it is finally done, and partly as it has really made me quite reflective of my Dad and what he’d have said about it. I have been teary a few times over the last few days (I know very unusual for me – I am blaming exhaustion), but I know he’d have been waving a flag and proud of my, albeit mad, endeavours.”

We are intensely moved that 34 years after the death of his father, and 12 years after first meeting Brain Tumour Research, James is still fundraising for us and has just completed his biggest ever challenge. James has raised £6,300 so far but if you can spare a little please click this link below  https://lnkd.in/dZc7nzgt

Our long-standing relationships extend to our celebrity supporters too. We are honoured to have had the support of Dame Sheila Hancock who has said “I became involved with the charity 20 years ago, after my grandson Jack, then four years old, was diagnosed with a brain tumour and raising awareness was a way to stop the feelings of frustration. I’ve seen this group of individuals work so hard to raise funds for research and equipment, growing more and more confident and determined. I’m delighted and privileged to be a tiny part of it.”

Next year will mark a decade of involvement with us for renowned property expert, businesswoman, TV presenter and writer Sarah Beeny and as she told the Mail on Sunday in 2020 when asked if she supported a charity she replied; “Yes, I do. I'm a big supporter of Brain Tumour Research. My mother died of a brain tumour when I was ten and then my stepmother also died of one. It's a hidden killer and not enough research is done into it.”

This week we spoke to Kelsey Hardwick, widow of Tom Parker on the day Tom’s book Hope: My Inspirational Life.  was released she told us

“Thank you so much to the Brain Tumour community for all of your support for Tom throughout his illness and now as we promote his book.  It was Tom’s dream to have a no 1 best-selling book because he knew the power of bringing attention to brain tumours and the devastating impact decades of under-funding is having on those affected by the disease.  Tom lived with hope, and we will continue to push for better research and treatment so that those diagnosed can have more hope of a more positive outcome. “

After his diagnosis in 2020, Tom become a prominent campaigner for brain cancer research, and Brain Tumour Research was proud to facilitate his meeting with the Chair of the All-Party Parliamentary Group on Brain Tumours (APPGBT) Derek Thomas MP and his addressing the group at their December meeting.

Tom’s inspirational memoir shows how far hope and daring to dream can carry you, no matter what cards you're dealt.

At Brain Tumour Research we don’t know how our relationship with Kelsey will progress, she is in the midst of the darkest of times and we are full of admiration at the way she is very visibly sharing herself with the media to tell Tom’s story. We will be here when she is ready to do more with us and we are here now for anyone affected by a brain tumour.

We aren’t a typical support charity but we offer hope. Hope through research, hope through campaigning for change and what could be more supportive than that?

And we aren’t going anywhere.

As our development of long-term relationships illustrates, we are in this for the long haul, we are here for as long as it takes.