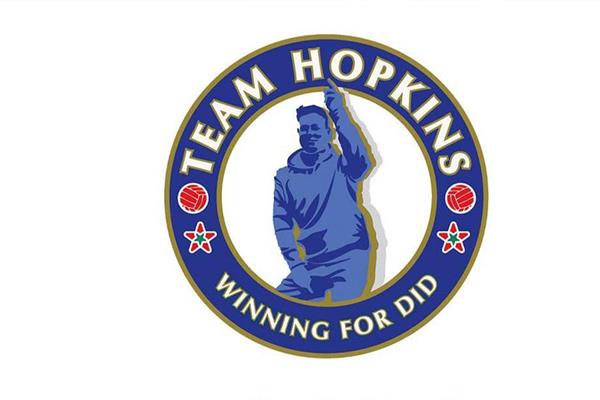 One of our updates last month was titled ‘The many forms of brain tumour activism’ and described how supporting Brain Tumour Research doesn’t have to be limited to one activity.

A great illustration of this comes from Nicki Hopkins and this week we spoke with Nicki about her brain tumour story and the setting up of one of our newest fundraising groups – Team Hopkins – Winning for Did.

On 1 September 2020, the lives of Nicki’s husband Dave (aka Did) Hopkins and his family changed forever, when the father-of-three from Scunthorpe in Lincolnshire was diagnosed with a glioblastoma.

Due to COVID-19 restrictions Did was given this news alone and then had to convey this shattering information to Nicki;

“It was horrific. I was in complete shock” Nicki told us, “ I had known of other cases of brain tumours and glioblastoma in particular  and so when Did told me he had a brain tumour I just prayed that wasn’t his diagnosis.. But it was and, in my head, I heard echoes of people saying that was a tumour type that gave patients no hope. Did was a man of boundless energy and so we began researching, googling, fundraising and we made our own hope through being positive – we felt Did could be one of the long term survivors - and we campaigned.

We lobbied our MP, Holly Mumby-Croft, who, on 27 January 2021, spoke about Dave’s diagnosis in parliament and raised a Prime Minister’s Question (PMQ) about whether the PM would work with Brain Tumour Research to help improve research and treatment options for patients like Dave. She highlighted that while the Department of Health is working with charities on addressing the issue, there is still much more to be done.”

The status of Dave’s tumour meant he was unable to access clinical trials in the UK and he underwent the standard NHS treatment of surgery, radiotherapy and chemotherapy

Nicki began to research every possible avenue, in the hope of finding alternative private treatments, both in the UK and abroad, which would give Dave the best chance of survival.

“I read the stories of other people in the same situation and by joining online groups and forums, I came across treatment at the IOZK clinic in Cologne in Germany, which creates personalised immune therapy to strengthen a patient’s immune system. The consultants we spoke to in this country were behind us pursuing this route, especially since other options we looked at in the UK were not suitable.

Unfortunately, however, this treatment would come at a huge cost – around £150,000 – and we would need to fund it ourselves.”

Dave’s first course of treatment in Germany began on 18 January 2021. It went well and he didn’t suffer from side effects, other than a bit of tiredness but in true Dave fashion, it didn’t faze him. Meanwhile, the fundraising continued apace and by the end of January, more than £42,000 had been raised. “This was completely overwhelming and we couldn’t thank our supporters enough for making the private treatment possible in what were such difficult times for everyone, as we were still in a national lockdown.”

The family pursued another line of private treatment at CeGaT clinic in Tübingen, Germany. A sample of Dave’s tumour was sent to the clinic for analysis, in order for them to develop a NeoPeptide vaccine.

At the beginning of April 2021, Dave had his MRI scan to follow up from inconclusive scan results in February. This scan revealed tumour progression. Dave had further surgery on 21 April and again, he coped very well and was home within two days and was back walking and doing the school run.

The CeGaT clinic in Tübingen had identified 23 peptides suitable for Dave and the family went ahead and paid £30,000 for the NeoPeptide vaccines, which would take a few weeks to be developed.

“These costly treatment options had to be explored because “we had exhausted all treatment options on the NHS and there was nothing more they could do. This was a massive blow but we were not ready to give up”.

A new plan was recommended which would involve Dave taking a checkpoint inhibitor called Keytruda, a drug that blocks proteins that are made by some types of immune system cells and some cancer cells. It would cost £7,000 per cycle and would be delivered by infusion every three weeks. Meanwhile, in August, the NeoPeptide vaccine treatment in Germany got underway and despite ‘looking like he’d been shot several times’, Dave completed his first four vaccines without any problems.

But his condition began to deteriorate, and on 6 November 2021, Dave died with his loving family by his side.

“He has left a huge hole in our lives. Did was unique and even when facing the challenges of his treatment in Germany he constantly tagged himself as the #2ndbestdancer (a family -in-joke).I am trying to fight the bitterness I feel that all of this happened during the pandemic and I have immense sadness that so much of Did’s last year took place during lockdown when we should have been making memories but however low I feel, Did is with me telling me to get a grip and to carry on living everyday as he would, live life to the full and help raise awareness and fundraise to help find a cure.

That is what I want to do, to help and to do what I can to find a cure for brain tumours.

I want to keep Did’s positivity and determination in me and that has given me and Team Hopkins the  courage to do things we didn’t think we would ever do like appearing on television, sky diving and in December 2021, alongside Tom Parker, I addressed the MPs at the APPG on Brain Tumours.

I use social media to reach our followers and I send out the weekly Brain Tumour Research campaigning blog to our Facebook friends and use our Twitter to share photos of our fundraising and of special days to remember.

On Friday 25 March 2022, North Lincolnshire Council lit up its Church Square House pink and yellow in celebration of Brain Tumour Research’s Wear A Hat Day. It was very emotional to see the building lit up in the charity’s colours. Did would not have expected that!

On the same day, all of the pupils at my daughter Sydney’s school - Bottesford Primary – wore hats to raise money.

I feel overwhelmed that everyone in the community is behind us. We’re forever grateful to the people of Scunthorpe for what they’ve done for us.

Did was profoundly shocked that a child diagnosed with a brain tumour would receive the same treatment that he did and he said that the treatment was brutal. Although he was actually a very private person when it came to his illness he was fully supportive of raising awareness and campaigning and he believed in what we did because he so wanted to make a difference for children and adults with brain tumours.

We know that only through research will we get new medicines to treat brain tumour patients and that is what we so desperately need. I believe brain tumours are a unique challenge and that calls for a unique approach, bringing us new answers, and so I place a lot of faith in the current APPGBT inquiry and I’m immensely proud that, through my lobbying of her, my MP Holly is a member of the inquiry panel. It shows what one individual can do trying to influence change.

I couldn’t find a cure for Did and it broke my heart and now I do what I can to try to stop more hearts being broken in the future and to remember my husband who wanted better outcomes particularly for children.

I will continue working with Brain Tumour Research to help raise awareness of this critically underfunded area of cancer research. I owe it to my wonderful husband and to all the other amazing brain tumour patients and their families who I’ve met on this journey so far.”

We asked Holly Mumby-Croft MP to comment on Nicki and she told us;

“We are reliant on our constituents to let us know what is going on in their lives and how, as MPs, we can work to change things for the better.

I was immensely moved by Nicki and Did’s story and I cannot imagine how difficult it must have been for them and their family.

Through talking with Nicki I was able to find out more about the need for adequately funded, dedicated brain tumour research in the UK and this led me to taking an active part in the All Party Parliamentary Group on Brain Tumours (APPGBT) and I am proud to also be a member of the APPGBT inquiry panel that is looking to find the pathway to a cure.

I entered Parliament to make a difference and although I knew little about brain cancer before I met Nicki, it is now a subject I feel strongly about and although it is a tragic story of loss, I am glad to have learned about Did and his family. I continue to be committed to doing what I can in his memory and as a legacy to all of those lost prematurely to this devastating disease.”

Having been flung into a world they would never want to be a part of Nicki and Team Hopkins show what Brain Tumour Research activists can achieve in so many ways – campaigning, fundraising, ambassadorial – they are ‘Winning for Did’