Behind the scenes at our Plymouth Centre event 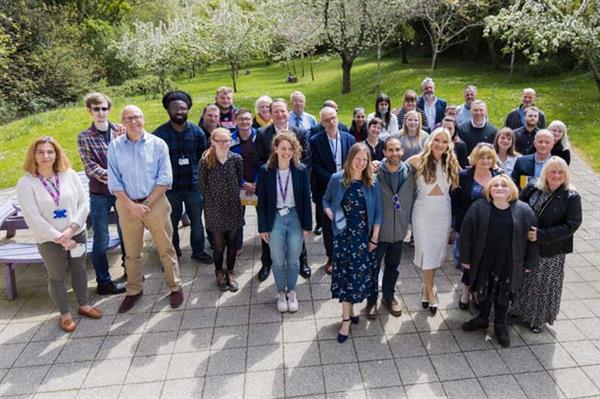 The doors of our Centre of Excellence at the University of Plymouth were opened to supporters last week, in the first event at the Centre since before the COVID-19 pandemic.

It was wonderful to be back in the lab, welcoming supporters and celebrating their amazing fundraising achievements. They had the opportunity to tour the labs and meet the scientists conducting the pioneering research. A number of supporters also placed tiles recognising the days of research they have sponsored on our Wall of Hope.

Our Patron, Caprice Bourret, who was diagnosed with a meningioma in 2017, opened the event with a speech in which she revealed that her latest scan showed she was now five years clear of the disease. Meningioma is one of the types of brain tumour that research at our Plymouth Centre is focused on and we were so pleased to celebrate Caprice’s news with her on the day! 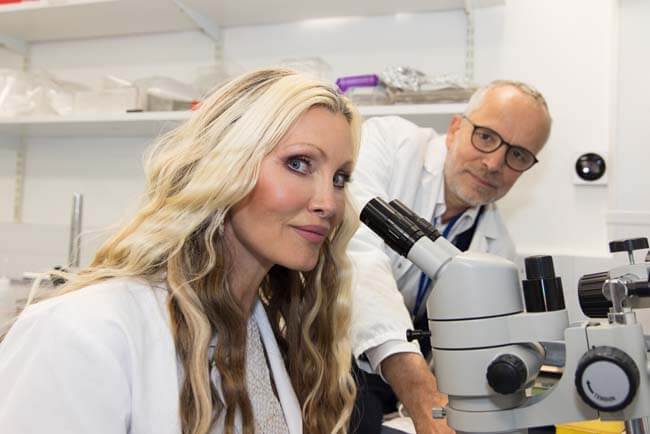 Caprice with Professor Oliver Hanemann, who leads the research team at our Plymouth Centre

Brain tumour patient Katie Galan-Wilkinson gave a moving speech about her diagnosis and the impact it has had on her family. Katie, a passionate advocate for more research into this devastating disease, later placed two tiles on our Wall of Hope, recognising the days of research she had sponsored. 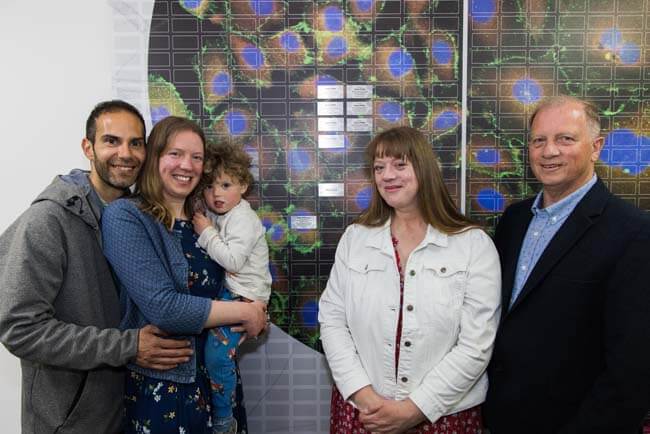 Katie (second from left) with husband Daniel, and parents Jane and Chris

Touchingly, Katie dedicated one of her tiles to her three children, Sofia, Hugo and Mario. It reads: “I live in hope to have a healthy future watching my amazing children grow up. Being your mummy is and always will be my greatest privilege. Our invisible string connects us always. I will love you forever.” 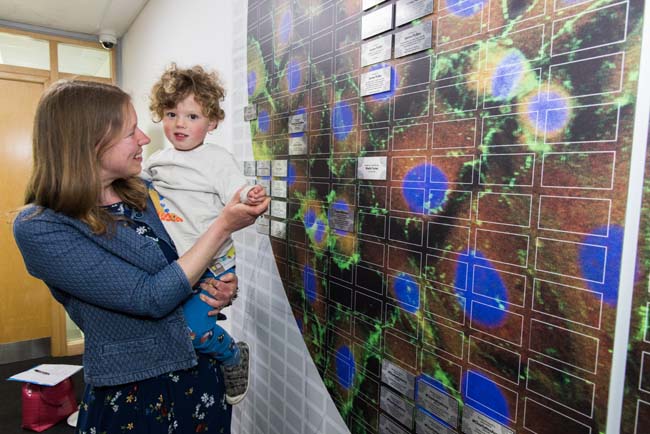 Katie and Mario at the Wall of Hope

We were so pleased to welcome Charlotte Reid, 22, who had made an incredible recovery having undergone surgery over the Easter weekend. Charlotte placed 12 tiles on the Wall of Hope, alongside her parents Angie and Steve. 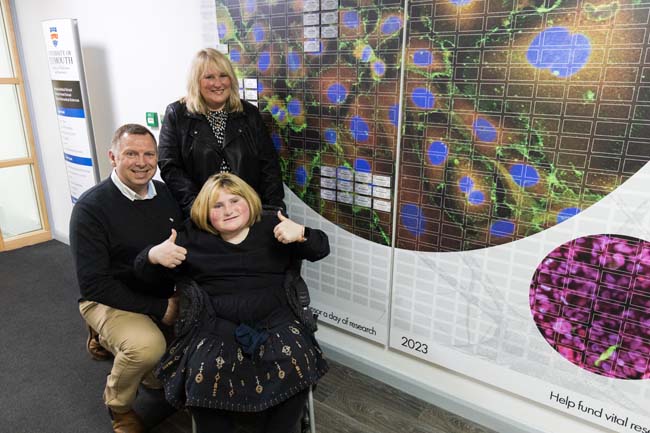 The family also spoke to BBC Spotlight about what it meant to visit the Centre and find out more about how the funds they have raised are supporting vital research.

“It’s heartening to see the amazing work that is going into trying to find a cure for this terrible disease.” That’s what Heather Turner had to say about attending the event. Heather was 24 when she was diagnosed with a brain tumour and dedicated her tile to her mum who nursed her back to health following her surgery. 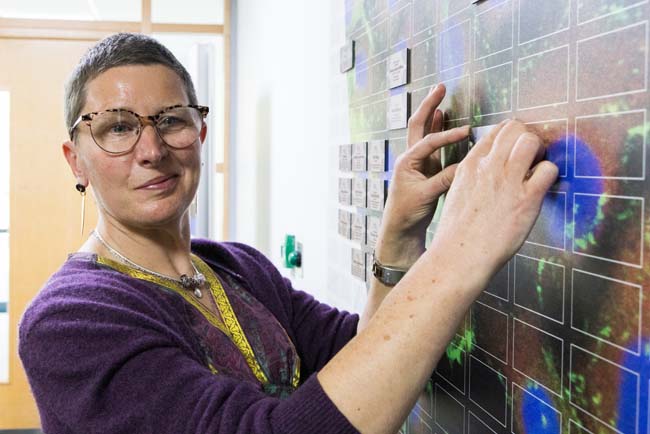 Heather placing her tile on the Wall of Hope

The equivalent of seven days of research was sponsored in memory of James Pullen, who died in December 2015, aged 28, five years after he was diagnosed with a brain tumour. James’ parents, Sarah and David, were accompanied by three of his friends, Tommy Corns, Joe Phelps and Thomas Palacio, on the lab tour. 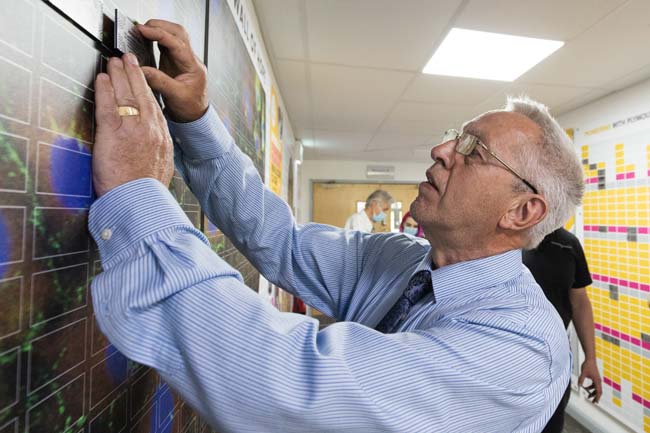 And they had a giggle with Caprice whilst posing for a photo! 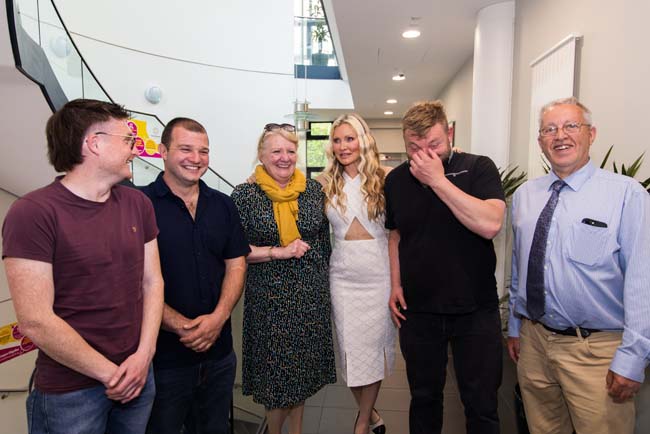 Two tiles were placed in memory of Emma Bullous, who died in January 2021, aged 23. Emma’s mum Paula D’Souza was accompanied by Emma’s stepfather Richard and half-sister Hannah D’Souza, and her dad Michael Bullous came with his fiancée Charlotte Faulkner and Emma’s half-sister May Bullous. Also invited were two of Emma’s close friends whom she had known since the age of seven, Robyn Morrish and Lucy Persse. 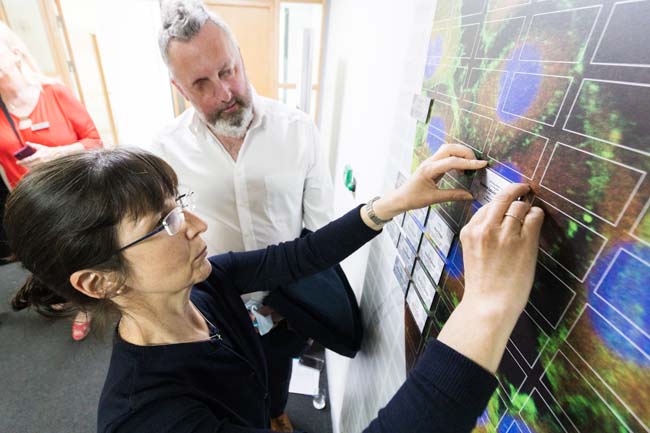 Paula and Michael placing their tile for Emma

Members of the Brain Tumour Research team were honoured to place tiles on behalf of those supporters who were unable to attend the event. Our National Events Manager Carol Robertson placed a tile on behalf of Steve Blake, who is living with a meningioma and recently shared the exciting news that he is expecting a second child with his partner, Becky. 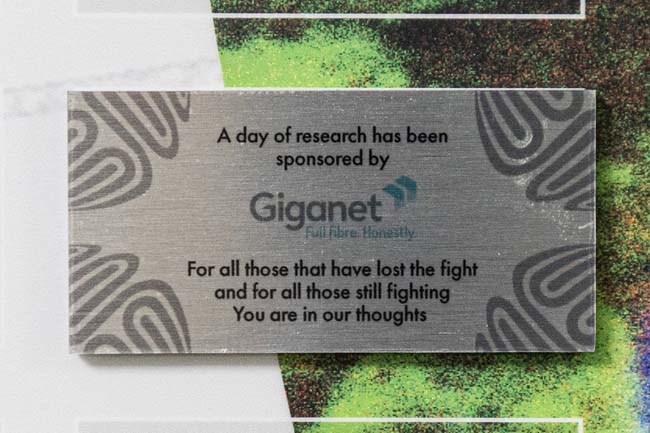 Astro Brain Tumour Fund, a Member Charity of Brain Tumour Research, raises money to support research into low-grade glioma (LGG) brain tumours and has sponsored 12 days of research at our Plymouth Centre, where the team led by Professor Oliver Hanemann focuses on research into low-grade brain tumours. Our Chief Executive Sue Farrington Smith MBE placed those tiles, which were dedicated to individuals diagnosed with the disease, on behalf of the charity. 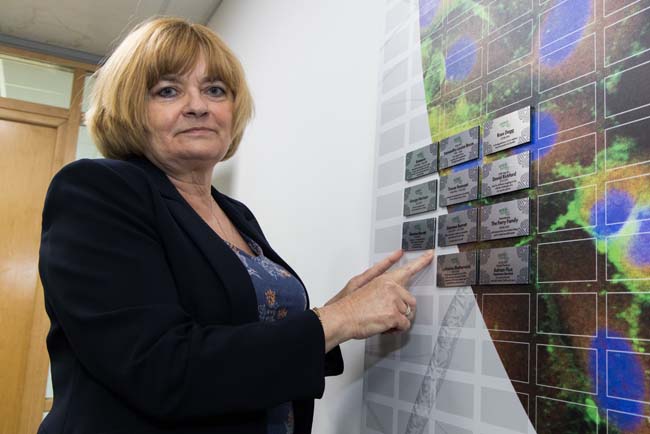 We’re looking forward to continuing our lab tours and welcoming more supporters back to our Centres of Excellence in the future!