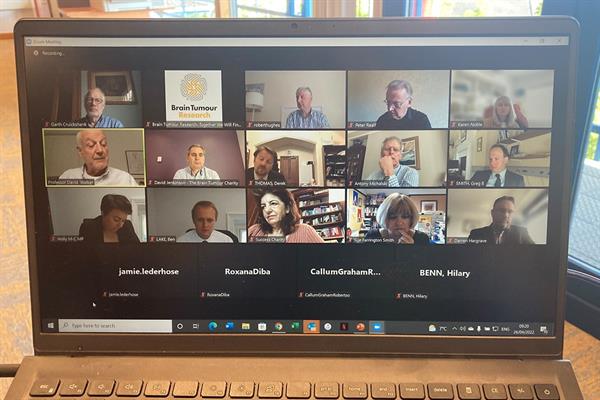 During the past fortnight over 60 new campaigners have been added to the database that receive these updates emailed directly to them every Friday morning – you can join them.

As our campaigning community grows our voice becomes louder and we were certainly heard at Westminster this week.

As the founders and providers of the secretariat to the All-Party Parliamentary Group on Brain Tumours (APPGBT) we have a central role in the ongoing inquiry ‘Pathway to a Cure – breaking down the barriers.’ The fourth oral evidence session of the inquiry was held virtually on Tuesday. Previous sessions have heard witnesses representing the NCRI and Tessa Jowell Brain Cancer Mission, those involved in clinical brain tumour research and those with a lab-based focus. On Tuesday, the panel members heard from the paediatric brain tumour research community.

A wide range of topics came under the spotlight ranging from the accessing and availability of clinical trials to brain injury and rehabilitation. The next inquiry session, to be held in a month’s time, will focus on the role industry has and could have.

The inquiry report will be delivered in early 2023.

Later the same day at Westminster a powerful debate highlighting childhood cancer outcomes took place. We were pleased to provide briefing notes to members contributing to this passionate and timely debate and will be following up with other contributors who spoke about brain tumours, and the stories of families within their constituencies, at the debate and encouraging them to engage with the APPGBT.

The report is published after the charity delivered its best year yet, having emerged from a restructure and tumultuous year as a result of the COVID-19 lockdown, with income of £5.3 million, up 76% on the previous year – we are so grateful to each and every one of you that helped us achieve this and put as well on the path to establishing another Brain Tumour Research Centre.

Covering the period 1st July 2020 to 30th June 2021, the report examines the charity’s achievements and performance in research at its Centres of Excellence, campaigning and awareness raising, and fundraising.

It summarises some key achievements including our petition calling for increased national investment into brain tumour research to £35 million a year which attracted 112,260 signatures and led to the publication of a report received by the Prime Minister; the launch of our Facebook challenges which have raised more than £2 million to date; the launch of new fundraising campaigns in response to lockdown restrictions; and numerous papers published from our Research Centres which bring hope for brain tumour patients and their loved ones.

You can read the Annual Report on our website by clicking here.

A Department of Health and Social Care spokesperson said: “Research funding is available now and researchers can apply to the National Institute for Health and Care Research (NIHR) and UK Research and Innovation (UKRI).

“We will support the motor neurone disease research community in making these applications and fully understand how important it is for funding to be allocated as soon as possible so even more progress can be made.”

Clearly innovative thinking to bring the two sides closer together is needed but the parallels with brain tumour research are undeniable and we will watch with interest to see if the NIHR can more speedily make this funding available in a way that they haven’t been able to for brain tumour research and will continue to challenge them.

In 2018 £40 million was made available for allocation to brain tumour researchers over the following five-year period Then Secretary of State for Health, Jeremy Hunt said “Our ambition is to deliver a big uplift in the funding of brain cancer research, while galvanising the clinical and scientific communities to explore new avenues for diagnosis and treatment in the future – it is a chance to create a genuine, step change in survival rates for one of the deadliest forms of cancer.”

Very sadly earlier this year Mr Hunt’s mother died from a brain tumour prompting Mr Hunt to ask the current Secretary of State about research funding. Sajid Javid responded that “…back in 2018 we announced £40 million of extra research funding over the next five years. I can tell him some £9 million of that has already been committed to some ten projects”

Of the £40 million made available for allocation through the NIHR in 2018, four years later less than 25% (‘some £9 million’) has been allocated, let alone found its way to the scientists’ bench.

We know this makes you angry and is the centre of many political questions and answers that you have asked of your elected representatives.

Last month this question was asked by Holly Mumby Croft (a member of the APPGBT, the inquiry panel and an MP who became involved with us through the lobbying of her constituent Nicki Hopkins).

The response came on 5th April from Health Minister Maria Caulfield and included:

“The Department funds research through the National Institute for Health Research (NIHR). The following table shows the funding provided for site-specific brain tumour research in each financial year since 2018/19. This does not include the NHIR’s infrastructure spending.

We do need to unpack these figures further but whatever we find, what we already know is the poor percentage of the money available that has been allocated.

The Government’s 2018 commitment to a £40 million funding allocation available for brain tumour research over the following five-year period was both timely and welcome.

We are now seeking absolute transparency on what has been spent and where. In addition, we would ask the NIHR for a clear and detailed report on why 75% of the £40 million remains unallocated and what needs to be done about it.

What’s more we need the Government to lead a long-term vision to improve prognostic outcomes and therapeutic options for our patient cohort.

The NIHR allocation comes at the clinical trial end of the translational pipeline, the final lap of the race to get new treatments to patients. This final lap needs investment in the earlier laps of discovery, early-stage science to make sure there is throughput from the scientist’s bench to the patient’s bedside. To date only 1% of the national investment in cancer research has been allocated to brain tumours since 2002.

A multi-platform approach is needed with the Department for Business, Energy and Industrial Strategy (BEIS) and UK life sciences, including UK Research and Innovation (UKRI) engaged to begin the process that leads to clinical trials, with discovery science being crucial to this process.

There is a precedent here, as only last week (and as quoted earlier in this update), a Department of Health and Social Care spokesperson said about MND: “Research funding is available now and researchers can apply to the National Institute for Health and Care Research (NIHR) and UK Research and Innovation (UKRI).”

Can that also happen for brain tumour research? We have been pushing for this through the APPGBT Inquiry and since our meeting with Lord Bethell in December 2020.

Questions need to be asked and new solutions proposed. We are doing this with a voice that is continually growing in amplification, tenacity and persistence.

This is a personal campaign that we are on together.

There is a current campaigning petition to fund OPTUNE brain cancer treatment for NHS patients:

“Optune treatment uses a novel “tumour treatment” electromagnetic field to treat cancer. It has been shown to be effective in brain tumours and is widely available in the US and Germany.

This treatment is currently not available from the NHS.

Brain tumours are the greatest cause of cancer deaths in the under 40’s; funding this treatment will give effective treatment and hope to patients and families.”

The petition to fund OPTUNE brain cancer treatment for NHS patients is here– the petition is live until September and has 33,495 signatures and having passed 10,000 signatures, it has prompted a Government response, which you can read when you click through to sign.

Finally we are delighted that Brain Tumour Research has welcomed supporters back to its Centre of Excellence at the University of Plymouth for the first time since the pandemic began.