Being on the other side – I went from professional to patient 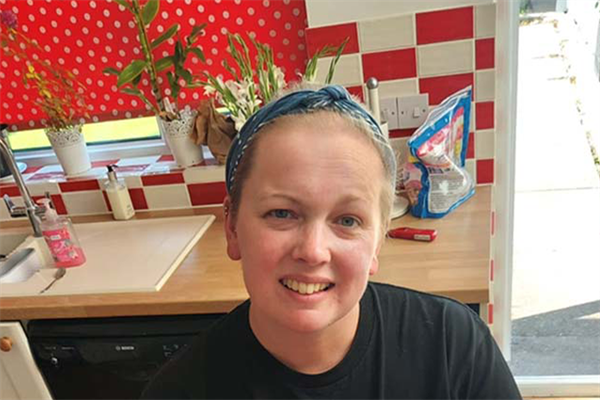 Having worked as a medical professional for a number of years, Hannah King-Page writes a blog on her experience of going from professional to patient, sharing an honest insight into how she adapted to being ‘on the other side’.

Having been part of the NHS for 14 years as a student and then a physiotherapist, and a lifetime alongside a mum, aunt, nan and cousin who all worked/work as nurses, a large group of work pals, doctor and nurse pals through various sports clubs and my gorgeous ‘Ribby Gals’, being around hospitals and talking ‘shop’ over the dinner table and in general conversation was completely normal.

On 16th October 2020, a mass on my brain was found. Four weeks later, I was in the operating theatre having a craniotomy to remove part of the tumour. A little over a week later I was diagnosed with grade 4 glioblastoma multiforme (GBM).

When I first started to experience what I know now to be focal seizures in July/August 2020, I used my basic clinical reasoning skills of neurology to decide I either had focal epilepsy, or a brain tumour. They were sporadic with no pattern to begin with, but when they started happening daily and when the ultimate faux pas occurred – I had one in work – I knew I had to seek an actual medical opinion. It wasn’t just a ‘weird breathing thing with an even weirder noise’; colleagues looked genuinely panicked and worried.

Fortunately, the seizure occurred in the office when writing up notes and discussing the day with a student physio, and not in front of patients. But I’m certain that student won’t forget their learning experience with me.

Hospitals and GP practises I have always associated with work, not being a patient. When I first started to attend GP, then hospital appointments I used to think we were discussing a patient. The scans that I was shown on the screens were that of a patient; I never thought they were of me, not of inside my head. I was so used to attending multidisciplinary (MDT) meetings, discussing scans with colleagues and explaining scan findings with patients – not the other way around. Even though it wasn’t brains that we were discussing in a musculoskeletal setting, it still felt completely ‘normal’ to me.

had ‘a moment’ at a Friday night MRI scan, the third in as many weeks, in the early days of first detecting the mass (mess) in my brain. I decided to take a selfie, and this tired, heavy-eyed, mask-wearing, cannula-wielding face looked back. Even before I shaved my head, I didn’t recognise myself. I said to myself: “This is it. Get used to being poked and prodded around, jabbed with endless needles and shoved in and out of noisy smartie tubes and being on the other side”.

I managed to find the neuro-oncology team before I was referred to them, through some illicit googling I’d had many conversations with my specialist nurse before I met them on the day I met my neurosurgeon. Again, at the appointment we talked shop, I performed the perfect neuro assessment as I had done a thousand times before on many a patient over the years. My husband attended with me, after the appointment he asked: “Can you now explain all of that in non-hospital talk?!” It genuinely felt like we’d just been to an MDT and discussed another patient as I was still in work mode.

Whenever I attended appointments, I’d always dress up, wear my hair down, wear make-up – completely the opposite to my work self in uniform, hair scraped back into a messy bun and not a scrap of make-up. During the first lockdown I’d lost weight, worked so much overtime I had paid off all my debts. I was feeling good about myself. Then my neurosurgeon mentioned shaving my hair around the incision site. I had long Sarah-Jessica Parker style hair, the thought of a ‘patch’ or a ‘strip’ being shaved off was too much for me to deal with. It was all or nothing. Having this weird patch of regrowth? Nope, not for me. 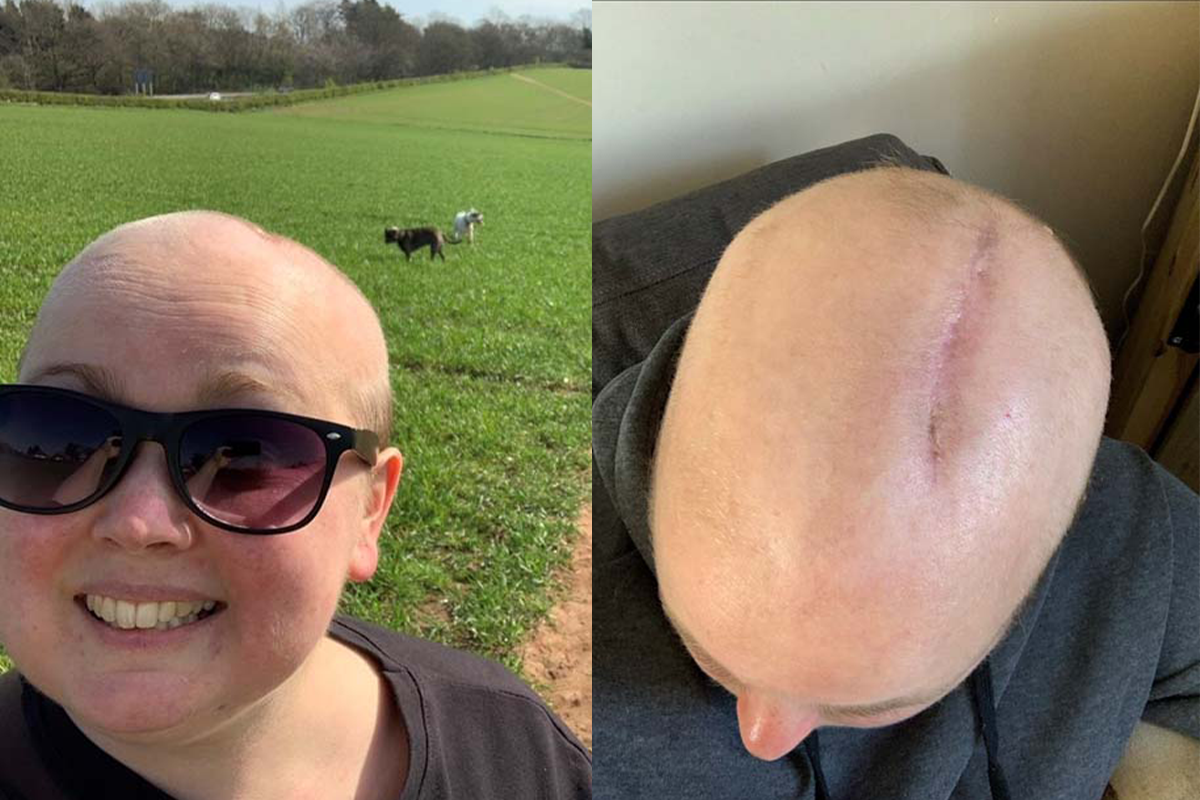 Hannah in April 2021 after six weeks of radiotherapy and chemotherapy

I didn’t realise it at the time, but this was one of the last things that I was to be in control of: shaving my head. After this point everything started to go at a rapid pace, then the second time I met my neurosurgeon he’d brought the surgery forward by many weeks and I had no time for the psychological preparation for the ‘awake surgery’. That decision was taken away from me, I was to have surgery under general anaesthetic.

As we left the appointment he said “see you next Tuesday”. My husband and I sniggered like school kids.

It was then time to shave my head, with the help of a hairdresser friend on the Sunday evening before my surgery on the Tuesday. I separated and made many tiny ponytails as the Little Princess Trust specified on their website, and within moments there were eleven 16-inch rat tails on the kitchen side. I drank a bottle of champagne that I had kept since my 30th birthday, I couldn’t think of a more fitting occasion.

I truly loved my job and had worked incredibly hard to get there. I wasn’t clever enough to do A-levels, I didn’t get many GCSEs, so I came to physio late as a mature student and qualified when I was 28 after resitting many GSCEs at night school.

I am now 39 and medically retired. Which I hate.

I miss having a purpose.

Eight months after meeting my specialist nurse she moved on, in her leaving card I wrote ‘thank you for never making me feel like a patient’ and I truly meant it. 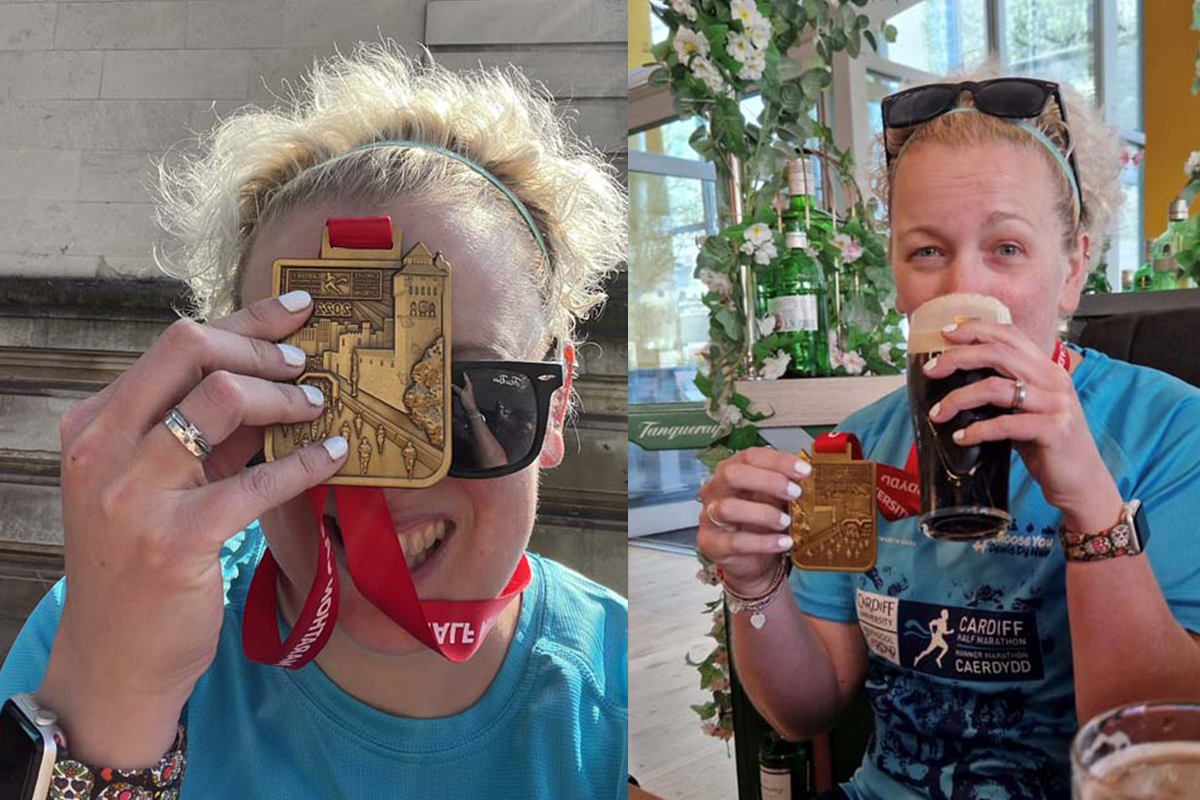 Hannah recently ran the Cardiff Half

Being on the ‘other side’ and on the receiving end as a health professional is a truly humbling experience. And if I was able to return to work, would my experiences of being on the other side change the care I delivered to my patients? I wouldn’t change a thing. It’s either in you or not and this confirmed for me that I had chosen the right career path.