Quickfire questions with milliner to the stars, Stephen Jones OBE 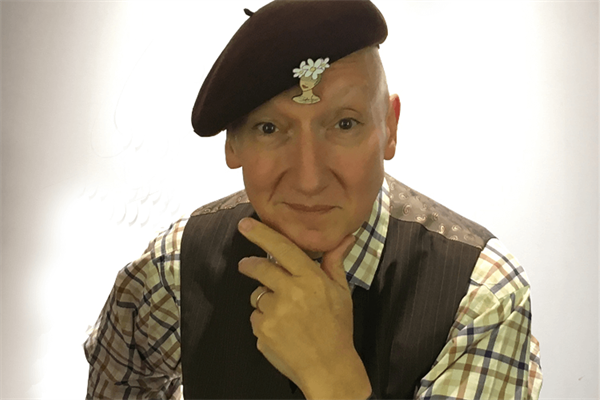 With a week to go until Wear A Hat Day on Friday 25th March, we caught up with celebrity milliner Stephen Jones OBE about all things hats.

Stephen Jones OBE burst on to the London fashion scene in the late 1970s and by 1980, had opened his first millinery salon in the heart of London’s Covent Garden. He quickly became one of fashion’s most illustrious designers, and over 40 years has worked rock stars and royalty, as everyone from Boy George to Princess Diana, Rihanna, Lady Gaga and Mick Jagger identified Jones as the milliner who would help them make the headlines.

The rollcall of designers that Stephen has worked with is equally impressive, from Vivienne Westwood to Christian Dior, and his hugely popular 2009 exhibition, ‘Hats, an Anthology by Stephen Jones’, went on a world tour.

Having lost his close friend, pioneering fashion stylist Dizzy Downes to a brain tumour in 2006, Stephen has supported Brain Tumour Research for many years. He said: “When Brain Tumour Research originally approached me, I was very ready to support the charity. As I get older, I have become more aware of a sense of responsibility to society and deserving charitable causes. I try to do as much as I can, but this one is personal for me, plus with Wear A Hat Day there’s an obvious connection.

Stephen’s involvement in Wear A Hat Day over the years has included providing an exclusive design for our sell-out fifth signature brooch and supporting our hattastic partnership with Hobbycraft in 2017 by creating three one-off hats to celebrate the occasion.

We are grateful for Stephen’s continued support and were delighted that he represented the world of millinery, alongside Rachel Trevor-Morgan, Her Majesty’s milliner, at the relaunch of the Wall of Hope at the Brain Tumour Research Centre of Excellence at Queen Mary University of London earlier this week.

Now, Stephen is once again supporting Wear A Hat Day and we asked him these five quickfire questions, all about hats:

What is your proudest millinery moment?

When I received my OBE from Her Majesty The Queen.

Of all your creations, which has had the biggest impact on your life?

It would be creating my first hat I ever made, which was my audition hat to be transferred from the tailoring department in Lachasse Couture House, when I was 19 years old.

Who would you most like to design a hat for who you haven’t yet worked with?

The British Police, and redesign their Bobby Hat.

And finally, what is your favourite hat?

A Top Hat, of which I have made many different versions, and is also a symbol of Brain Tumour Research’s Wear A Hat Day campaign.