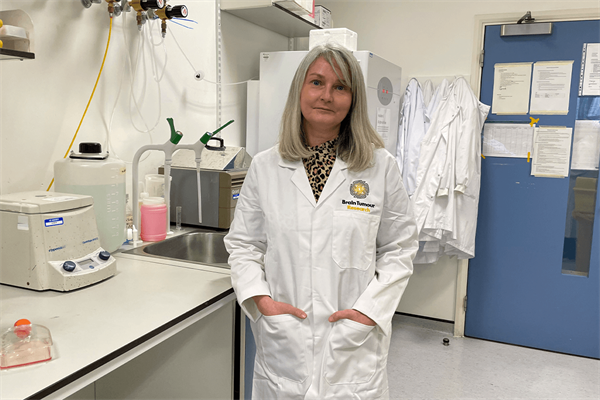 On the first day of British Science Week, Director of Research, Policy and Innovation at Brain Tumour Research, Dr Karen Noble, shares an insight into the impact of the research the charity is funding at its UK Centres of Excellence and the pioneering discoveries being made.

The theme of British Science Week this year is ‘Growth’ and I am delighted to be shining a spotlight on the ground-breaking progress being made at our Brain Tumour Research Centres of Excellence.

This financial year, we’re granting £2.5 million to our Research Centres and BRAIN UK, the virtual brain tumour tissue registry based at the University of Southampton. Our research programmes remained resilient throughout the challenges presented by the COVID-19 pandemic and their continuing success is highlighted by the increasing number of significant breakthroughs being made.

Our Centre of Excellence at the University of Plymouth concentrates on low-grade brain tumours, particularly meningioma – the most common primary intracranial brain tumour. Led by Professor Oliver Hanemann, the Centre incorporates three research groups investigating how tumours initially arise and how low-grade tumours develop into higher grade ones. In a short period of time, it has become a leading specialist research centre for low-grade brain tumours.

A further aim at Plymouth is to identify biomarkers that are linked to low and high-grade tumours, enabling the stratification of tumours into specific subtypes. The Centre also seeks to identify and validate new drug targets for meningioma using cell culture models. The Centre has strong links with clinicians at the local hospital in Plymouth and with Bristol. The Brain Tissue Biobank at the University of Plymouth holds tumour tissue, blood and associated clinical data, facilitating translation into clinic.

We were delighted to hear the panel’s views about the impressive progress made by the Centre. The team’s research has led to several impressive publications to date, with more likely to be published over the next year. Professor Hanemann has established a strong community of basic scientists and clinicians, including neurosurgeons and oncologists, working together to identify several new drug targets in low-grade brain tumours. A major focus of the Centre in the future will be to translate these findings into clinical trials towards potential new treatments. As summed up by the patient representative on the panel: “A patient would be very reassured that money is being well spent”.

Several significant results from the Research Centre were published in the last year, including: the discovery of a biomarker which could see a simple blood test could reduce, or in some cases replace, the need for intrusive surgery to help determine the best course of treatment; a potential novel biomarker that could be valuable in the early diagnosis of high-grade meningioma and offer new approaches for developing better treatment options; evidence on the genetic changes that contribute to neurofibromatosis which could be used to improve clinical decisions on diagnosis, treatment and prognosis; and study showing that drugs developed to treat AIDS and HIV could be repurposed to treat meningioma and acoustic neuroma.

The Brain Tumour Research Centre at Queen Mary University of London is a partnership between The Blizard Institute at Queen Mary and The National Hospital for Neurology and Neurosurgery, Queen Square, London. The Centre is aiming to develop novel therapeutic approaches for brain tumours. The team primarily focuses on research into glioblastoma multiforme (GBM), the most common and aggressive form of brain tumour in adults, and is also applying innovative approaches to develop new treatments for childhood tumours, such as medulloblastoma and choroid plexus tumours.

The Research Centre at QMUL has established an entirely new experimental research pipeline to collect and analyse cells derived from brain tumour tissue. Using a combination of laboratory work and sophisticated analytical computer programs the team is already identifying key molecular differences that can potentially be exploited to find a cure.

This new system enables the comparison of normal and malignant cells from the same patient, helping to identify genes that play a role in glioblastoma growth. Using this technique, they are able to study changes in the function of genes that do not entail a change in the genetic code (epigenetics). This clever method seeks to identify new targets for individualised drug treatments.

The Research Centre has produced several exciting results in recent years, including: establishing an entirely new experimental research pipeline to analyse diseased and healthy cells from the same patient, which could pave the way for truly personalised treatment for GBM patients; identifying a potential new approach to treatment for medulloblastoma by cutting the tumour’s energy supply which brings hope of developing new targeted treatments; and identifying potential new targets for treating GBM, which could be of great importance for developing new treatments to target this aggressive form of brain cancer.

Led by consultant neurosurgeon Mr Kevin O'Neill, and scientist Dr Nel Syed, our Imperial Centre has developed a systems biology approach, applying artificial intelligence, computational and mathematical models of complex biological systems to help understand how brain tumour cells function, and how they can be manipulated to cure this disease. This use of artificial intelligence enables them to quickly investigate key pathways and genetic mutations that drive brain tumour growth and identify ways to sensitise tumours to existing therapies (hence making them more effective, potentially at lower doses to reduce side effects). They also have a strong focus on exploring existing drugs currently used for other diseases that affect cancer pathways and hence could quickly be repurposed for use in brain tumours, as they are ideally placed to test such drugs in preclinical and early phase clinical trials.

At the beginning of Brain Tumour Awareness Month in March, we were excited to share how researchers at our Imperial Centre have discovered a potential new treatment which could dramatically improve the effectiveness of radiotherapy for patients diagnosed with the most common and deadliest form of brain tumour. Scientists found that a drug which depletes the amino acid arginine made glioblastoma multiforme (GBM) tumours much more susceptible to radiotherapy. The research has been published in a paper in the Journal of Clinical Investigation and you can read more about what it could mean for patients here.

In January 2021, the Centre launched a new clinical trial that will test a range of techniques for visualising and detecting tumour tissue. These techniques consist of a camera with a filter to be linked to the standard microsurgical and endoscopic instruments used in theatre. If successful, the trial would help neurosurgeons to remove brain tumour tissue more effectively. The study aims to recruit 50 patients and it is likely to run for three years.

The research team grew in capacity at the end of 2021. Dr Sophie Morse, a post-doctoral scientist, joined the Centre with expertise on the focused ultrasound delivery of drugs to the brain. A post-doctoral scientist funded by Member Charity Brain Tumour Research Campaign (BTRC) and two self-funded PhD students also started at the Centre in October.

We have been pleased to see that overall spend on brain tumour research in the UK has continued to increase, reaching £17.6m in 2020/21, as reported by the National Cancer Research Institute (NCRI). Nevertheless, there is a long way to go before our campaigning goal is reached, in which overall funding for brain tumour research reaches £35 million per annum.

We are making steps in the right direction, but we need your continued support to continue to grow our research capacity so that we can make further discoveries that will improve outcomes and treatments and, ultimately, find a cure.