An Imperial paper, evidence and pizza 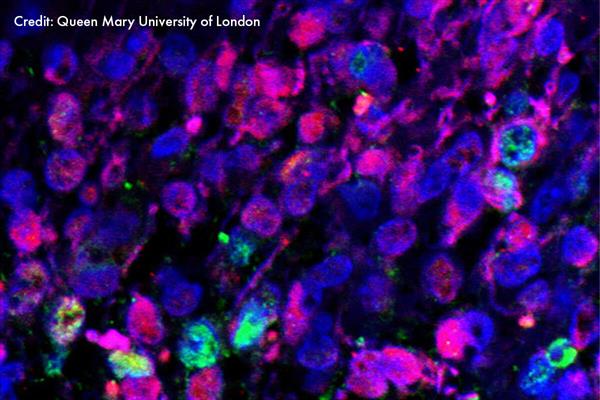 We are delighted to open this week’s campaigning update with news of a paper from the Brain Tumour Research Centre at Imperial College London where scientists funded by the charity have found that a drug which depletes the amino acid arginine made glioblastoma (GBM) tumours much more susceptible to radiotherapy.

GBM is the most common type of primary high-grade brain tumour in adults and the most aggressive and deadly. Less than 1% of patients with GBM live for more than ten years and, for many, the prognosis is as little as 12 months.

Arginine is an amino acid used in the production of complex molecules called proteins, which conduct a vast range of functions within cells. Arginine is required by a variety of cancer cells, especially ones that are growing quickly, and therefore depriving tumours of this amino acid has been explored as a potential anti-cancer strategy in a variety of tumour types, including GBM.

Dr Nel Syed, who leads the team at the Brain Tumour Research Centre of Excellence at Imperial, said: “Arginine is a vital nutrient for tumour growth and our results show that reducing its supply makes tumours much more susceptible to radiotherapy. Removing arginine removes tumour immunosuppression and we found our approach meant immune cells around the tumour were more likely to attack and remove tumour cells.”

Our Director of Research, Policy and Innovation, Dr Karen Noble, further commented, “Whilst these studies were undertaken in the laboratory using preclinical models, the results are promising. Clearly the next step will be to explore the safety and effectiveness in humans by setting up a clinical trial – we’re pleased to report that data from the Imperial research has already helped inform a clinical trial in Taiwan where a small cohort is being enrolled to evaluate ADI-PEG 20’s efficacy in combination with radiotherapy and Temozolomide in patients with GBM. The trial is due for completion at the end of 2023.”

The Imperial paper has been published in the Journal of Clinical Investigation, and is a piece of research we are very proud of.

I didn’t include this last week, but a week on from International Day of Women and Girls in Science, we continue to celebrate the inspiring female researchers, like Dr Syed, at our Brain Tumour Research Centres of Excellence.

Following a speech by Sajid Javid we have responded to his declaration of a  ‘War on Cancer’ and now The Department of Health and Social Care (DHSC) has published a call for evidence to inform the development of the Government’s 10-year Cancer Plan for England, based on the Secretary of State’s announcement.

Rather than a formal consultation on specific proposals, this constitutes a request for ideas and evidence allowing anyone an opportunity to feed into the Plan. It will run for a period of eight weeks and is open to everyone aged 16 and over. You can respond as an individual, or on behalf of an organisation. The secretary of State says: “Please help us shape this long-term vision and join this new national effort, as we strive to diminish this blight on this nation’s health and happiness.”

Parliament is in recess, but we haven’t been giving MPs a week off!

Following last week’s update, thank you for those of you who offered to support us, and the APPGBT inquiry, by asking your constituency MP to ask a question of the Secretary of State for Health. You have now all received questions from us and some of you have already received replies from your MPs too.

This is all very encouraging.

There are many ways to support us and social media is, of course, another one. These research news updates are posted as a blog on our website on Friday afternoon, they are tweeted about on Saturday from our Twitter platform and on the same day go onto our Facebook page. Please do retweet, like, comment and share where you can  - it does make such a difference.

We are looking forward to the first oral evidence session of the APPGBT inquiry which is taking place on Tuesday. This is a closed meeting and so we can’t send out links to join but keep an eye on our Latest News page where we will upload a post event update on Tuesday afternoon.

There will be a normal meeting of the APPG towards the end of March, when we can engage our MPs to join and campaigners wishing to observe can do so. It won’t be long before APPGBT meetings, and indeed other brain tumour events, become hybrid and we look forward to meeting you in person again at Westminster and delivering our campaigning message whether in Portcullis House or in a meeting room with the Palace itself.

Of course, we look forward to enjoying a pizza together afterwards as well!

We aren’t a traditional support charity but what could be more supportive than uniting a community in a common cause, campaigning about it and then enjoying the occasional Margherita too!

The takeaway (to stretch the food analogy) from this week’s update is that when it comes to a call for evidence, like those from the DHSC and the APPGBT (who have been asking researchers about their funding experience), people aren’t going to know what you think unless you tell them. When it comes to supporting our blog on your social media pages then people can only support a cause if they know that it exists and the more people who know, the more people will care and want to do something and that is how we grow and achieve real change.

That is why we are campaigners – thanks for what you have done, what you are doing and what you will do in the future as we strive to improve the options and outcomes for brain tumour patients and their families.