What happens when you’re diagnosed with a life-changing illness? 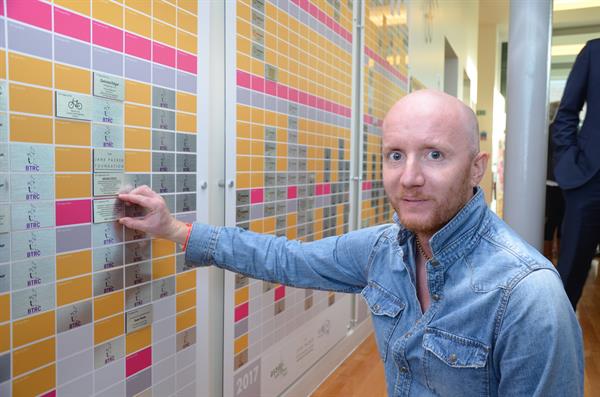 Ben Lindon was diagnosed with an inoperable oligodendroglioma in March 2008, a week before his 29th birthday. He underwent radiotherapy and 120 cycles of chemotherapy – thought to be a record for a UK patient. Amazingly, having been told his treatment would render him infertile, he went on to father two children, Martha and Sid. A dedicated fundraiser and campaigner for Brain Tumour Research, Ben is keen to tell his story in his own words and has written an evocative guest blog about his diagnosis:

I was running late.

I was out running and it was late at night.

I felt I could sprint all night.

Suddenly my arm went numb. I thought I was having a stroke. I fell face down on the black tarmac, but I could just make out a tiny light in the distance. I was determined to get to it, convinced it was a house where I could get help.

Two men with shaved heads were carrying me to their car. I was convinced, in some delirium, that they were trying to abduct me. I tried in vain to fight them off before one settled me on the verge and explained they had swerved into a ditch to avoid me.

Apparently, I was having a seizure.

I didn’t believe them and we continued our struggle until one of them told me he had called for an ambulance and offered me his phone. I immediately rang my mother’s partner, Richard, who raised me since I was six (he passed away this year at the age of 91).

Amazingly Richard arrived before the ambulance. God only knows how fast he must have driven! He was the first person there for me. Afterwards I learned he spoke to the two men and thanked them for their kindness. He demanded to get in the ambulance with me, held my hand and stayed on the phone to my mum – he was, and will always be, my fantastic father figure.

Richard stayed with me through the next couple of nights. When my mother arrived, they both stayed by my side for the remaining couple of weeks, as did my then-girlfriend who stayed by me throughout the whole process of aggressive radiotherapy and chemotherapy.

What disturbed her the most though was when a clinician pulled back the hospital curtains and dropped the bombshell on me that I had a brain tumour. Bless her soul as she watched my world fall apart and had to witness her boyfriend curl up into a ball and howl for his life. No one was there for her apart from me. Crushed, broken me. And what use was I? None. I was too busy feeling sorry for myself. I was so selfish and wrapped up in my own despair I had no time in my knackered brain for anyone else but myself. Myself and my brain tumour.

From then on, every morning I would wake up thinking: “You’ve got a tumour and you’re going to die.” Despite the amazing support from my family, friends, loved ones and my oncologist I was too wrapped up in my self-pity. Maybe it was the correct response to a diagnosis that could define my life.

No one should tell anyone how to grieve, but in hindsight it’s clear to me that my way was the wrong way.

Shutting people out and pushing everyone away – is that the right response? Is there a right response? I don’t think there is a correct way – there are no rule books for this situation. However, I do regret my behaviour and I’d like to apologise to everyone who I hurt and ignored during that period of time. My family, who never left my side when I was too scared to sleep, all my family who I pushed away by saying I was ‘alright’, my girlfriend who put up with all kinds of terrifying behaviour and my friends who I was either too overwhelmed or too tired to reach out to.

Thankfully everyone continued to be there for me. I was lucky. So, so lucky. I was surrounded by love and support.

I was training to become a retained firefighter alongside working full time as a journalist. I was at the height of my fitness. I’d bought a house with my girlfriend and I was young. But, again, in hindsight, what did that matter? What did that matter when everyone around me was terrified?

They had no support. I was too wrapped up in my own problem and everyone else was too polite to get involved. No one was there for all those who were there for me. While I was wrapped up in my own bubble of safety, everyone else was trapped outside, completely alone. No advice, no support groups, no counselling, friends couldn’t speak to specialists. They were stuck with no visits and the curse of the internet to multiply their fears. However bad you think it was for me, it was 10 times worse for everyone else. Sitting on their hands, hoping for the best, preparing for the worst.

Honestly, I think the way the system operates is completely intolerable. Yes, people with life-changing illnesses need help, but the people around them actually need it more. The system has to change because there is nothing set up to protect and support them. Absolutely nothing. All people need help. No matter what. It’s common courtesy and their human right.

Before putting these words down, I couldn’t believe that in the 14 years since my diagnosis absolutely nothing has changed. It’s tragic, but nothing surprises me anymore.

What has broken in the system where empathy for those closest to a patient comes last? This needs to change.

My mother has endured all of this with me. A single mum since I was four, she has never stopped fighting my corner and working through the bad times to make sure I felt safe. She and her partner Richard thanklessly and quietly worked their way through everything. Calls from me at 4am when I was so scared, I could only reach out to my mum. I was back to being a child again. But, no judgement and distress, just her calm voice at the end of the phone.

This is dedicated to my wonderful mother, still fighting my corner today. Her unflinching love is what inspires me to be a better father to my two children every day.