Our APPG, the Cost of Cancer and recognition 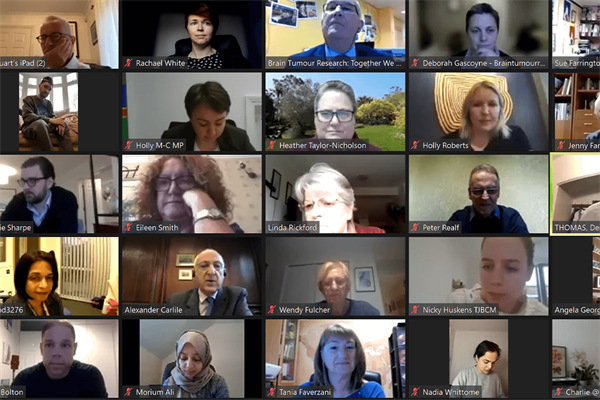 The APPGBT took place as planned on Tuesday morning. A well-attended and emotional meeting saw members of the brain tumour community come together virtually to discuss the issues experienced by those facing a devastating diagnosis. The Wanted singer Tom Parker opened the meeting speaking about his own diagnosis with a glioblastoma multiforme (GBM) in October 2020. He expressed his frustration at the lack of options for brain tumour patients and spoke about the “truly horrific” nature of his gruelling chemotherapy and radiotherapy treatment. He said: “I’m staggered they can find a cure for COVID-19 within a year but can’t find better treatments and ultimately a cure for brain tumours for decades on end.”

Speaking alongside Tom was his ‘brain tumour brother’, Dave Bolton. Also living with a GBM, Dave described his own experience of the “brutal” treatment and shared the “alarming” statistics surrounding brain tumours.

Other members of the brain tumour community also shared their own moving stories, including Charlie Sharpe who explained about the impact of his own treatment, Holly Roberts who spoke about the tragic death of her son Larsen, and Nicki Hopkins who sadly lost her husband Dave to a GBM just a matter of weeks ago.

The meeting closed with an update on the ‘Pathway to a Cure – breaking down the barriers’ inquiry from our Chief Executive Sue Farrington Smith MBE, during which she outlined the context of the inquiry, progress and next steps.

Sue said: “It is high time that brain tumour research is given parity with other cancers such as leukaemia and breast cancer. This inquiry will break down the barriers and provide the pathway to achieving this.”

Full minutes from the meeting will be posted to our website in due course.

MPs who attended the meeting alongside our Chair Derek Thomas were Holly Mumby Croft, Greg Smith, Hilary Benn, Nadia Whittome, Ben Lake Gavin Robinson Hannah Bardell and Andrew Stephenson. Every one of the MPs in attendance have been engaged by Brain Tumour Research campaigners – you know who you are – thank you.

We now look forward to the first APPGBT meeting in 2022 and the opening of the inquiry proper.

New research has uncovered that for many, the long-term financial impact of cancer can reach more than a year’s average UK salary.

Analysis from Macmillan Cancer Support, reported in today’s Independent newspaper, reveals that more than four in five people living with cancer – almost 2.5 million people across the UK – are hit by a ‘cancer price tag’ that reaches almost £900 a month. Further research also shows there are still tens of thousands of people with cancer in the UK struggling to pay basic living costs because of the COVID-19 pandemic.

The financial hit that many people face as a result of a cancer diagnosis can come from an array of extra and often unexpected needs, as well as a drop in earnings if they are less able to work. For example, the latest figures show that more than half of people with cancer see an increase in day-to-day living costs (54%), with more than a quarter experiencing extra costs travelling to and from their appointments (28%), and around one in six (17%) facing higher household fuel bills. In addition, three in four people with cancer (75%) experience a loss of income.

The report outlined that an average household will lose £14,783 per year following a brain tumour diagnosis versus £6,840 for all cancers. Other key findings included that those affected, pay nearly an extra £1,000 per year on household bills, with 30% of survey respondents having to make costly home modifications as a result of their diagnosis; patients are required to surrender their driving licence, leading to a loss of independence and ability to work; and brain tumour patients often fall into debt, owing an average of £4,762.

These findings were submitted to the All-Party Parliamentary Group on Brain Tumours (APPGBT) first ever Inquiry, which resulted in the publication of its 'Brain Tumours - a cost too much to bear?’ report.

Brain Tumour Research is delighted that Stop the Devastation has been recognised as one of PR Week’s ‘Eight healthcare campaigns we liked in 2021’.

The list, compiled by the title which is the leading source of news and analysis for the public relations industry, features standout campaigns from a “crowded field” in the last year.

Stop the Devastation starred brain tumour patients and those who have lost a loved one to this devastating disease. They worked with the charity to raise awareness of brain tumours, expose the historic underfunding for research into the disease and encourage people to donate to help stop the devastation.

We launched the outdoor awareness campaign in June, using videos, posters and flyers that were showcased throughout summer at many major music festivals. With support from headline acts and affiliated organisations, and impressive UK-wide press coverage, we reached millions of people across the UK. Our #NoMore social media movement also saw celebrities, including Stephen Fry, Dame Sheila Hancock DBE and Danny Clarke, getting involved to help raise awareness.

Sue Castle-Smith, our Head of PR and Communications, said: "We are extremely proud that Stop the Devastation has been recognised in this way and we remain indebted to the patients and families who bravely shared their stories to help raise awareness of this devastating disease.

“Stop the Devastation laid bare the powerful and painful truth about brain tumours – they are indiscriminate, can affect anyone at any age, there is no cure and for many, sadly, there is little or no hope. We thank all of our supporters who joined our movement to help us get closer to a cure.”

In last week’s update we heard from Professor Kathreena Kurian on why she is a brain tumour campaigner as well as a brain tumour scientist. On a similar subject, I recently spoke to Consultant Neuro-oncologist at Imperial NHS Trust Dr Matt Williams. He believes campaigners have an important role as support for clinicians who advocate for brain tumour patients. He said that as we move toward the new world of holistic healthcare featuring  Integrated Health Systems (ICS) it is important that we highlight the needs of brain tumour patients. As Matt put it our community always needs someone to go into bat for it and this person needs to be armed with accurate information and ‘actionable intelligence’ which can only be gained from the combing clinical experience, data and patient voice.

The patient voice was heard loud and clear at this week’s APPG!