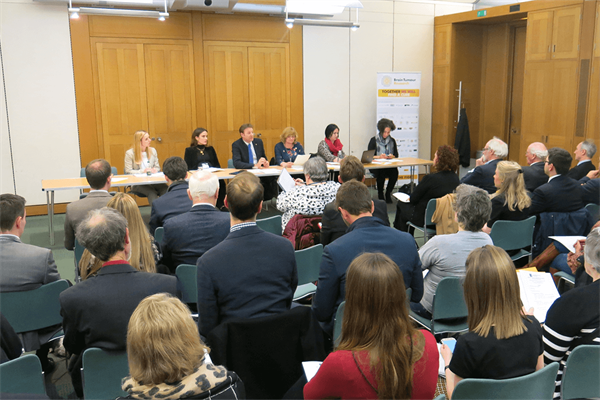 An update on Parliamentary Questions (PQs) to begin with;

On October 26th Gregory Campbell (DUP - East Londonderry) asked the Secretary of State for Health and Social Care, what progress has been made to encourage more high-quality applications for funding into brain tumour research.

In May 2018 the Government announced £40 million over five years for brain tumour research as part of the Tessa Jowell Brain Cancer Mission through the National Institute for Health Research (NIHR). We are relying on researchers to submit high-quality fundable research applications in a difficult area with a small research community. We have released a public announcement making clear our desire to receive funding applications.

Working with the Tessa Jowell Brain Cancer Mission, we held customised workshops in October 2021 to support the research community in submitting more fundable research applications and we are funding training in research for specialist brain tumour oncologists. The NIHR has received 69 applications to date, of which 10 have already been successful with others still under consideration.

As mentioned in my last update Nadia Whittome (Lab – Nottingham East) asked the Secretary of State for Health and Social Care, what steps his Department is taking to improve outcomes for brain tumour patients.

In May 2018 we announced £40 million over five years for brain tumour research to improve outcomes for cancer patients as part of the Tessa Jowell Brain Cancer Mission through the National Institute for Health Research. Since this announcement, 10 applications for research have been funded and seven are under consideration.

The NHS Long Term Plan set out a series of commitments that focus primarily on fast and early diagnosis for all cancers including raising greater awareness of symptoms of cancer, lowering the threshold for referral by general practitioners and accelerating access to diagnosis investing in rapid diagnostic centres. These measures, aimed at improving cancer outcomes for all cancers, will benefit brain tumour patients.

I’ll return to the £40 million mentioned in both answers later in this update but to the second point made by Ms Caulfield, we would contest that “These measures, aimed at improving cancer outcomes for all cancers”, won’t “benefit brain tumour patients.”

“Fast and early diagnosis” is only truly beneficial if therapeutic options are available to make the most of the ‘gained’ time, and we know that is just not the case in our area.

This needs better funding for the discovery science that underpins clinical innovation. It is for an increase in Government funding that we are a campaigning force, a force to be reckoned with and a growing force.

We have campaigners in the constituencies of both Mr Campbell and Ms Whittome and I know that in the case of Ms Whittome’s question this was as a direct result of a brain tumour campaigner lobbying her. Maria Caulfield has a campaigner in her constituency too as I have been copied into communications between them in which the Health Minister has written “We do need to increase the research being done into the management and treatment of brain tumours.”

Edward Argar as well as having a campaigner in his constituency also made a vocal contribution to the post brain tumour petition Westminster Hall debate in 2018 saying  “Other Members have cited the stark statistic that research into the disease accounts for just over 1% of the £498 million spent on cancer research, and that is truly shocking…. We need to see the amount of funding increased to the £30 million to £35 million proposed in the petition. The Petitions Committee was right to state that brain tumour patients have been let down by a lack of leadership from successive Governments. This is not a party-political issue; it is about getting it right.

Brain tumour campaigners lobby their elected representatives, MPs then question ministers, and then activists with long memories, like all of us continually, tenaciously and doggedly hold politicians to account.

Then there are select committees.

Select committees are small groups of MPs or members of the House of Lords that are set up to investigate a specific issue in detail or to perform a specific scrutiny role.

The responsibility of the cross-party Health and Social Care Committee is to scrutinise the work of the Department of Health and Social Care (DHSC) and its associated public bodies and examine government policy, spending and administration on behalf of the electorate and the House of Commons. They were in the news this week as Secretary of State Sajid Javid appeared before them for the first time since his appointment.

This powerful and influential body is chaired by Jeremy Hunt MP and has ten other members including;

Anum Qaisar Javed (SNP -  Airdrie and Shotts) who asked a brain tumour question at PMQs in September – read about Rayhan and Anum’s motivation for questioning the PM.

Dean Russell – who is an officer of the APPGBT

Three of the other select committee members have brain tumour campaigners as their constituents.

As for the Chair of the group Jeremy Hunt was the Secretary of State for Health in 2018 when the DHSC was announcing the funding boosts of £40 million for brain tumour research. When the first tranche of £20 million was announced in Feb 2018 a press release from DHSC quoted Jeremy Hunt who said;

“Our ambition is to deliver a big uplift in the funding of brain cancer research while galvanising the clinical and scientific communities to explore new avenues for diagnosis and treatment in the future – it is a chance to create a genuine, step change in survival rates for one of the deadliest forms of cancer.”

As I mentioned campaigners have long memories.

PQs, the £40 million, workshops the APPGBT, the composition of the Health and Social Care Committee, are all part of the step change.

We want to move forward faster but let’s not forget what we have done so far because that is our foundation for the pathway forward.

Researchers say that the only failed clinical trial is one that you learn nothing from.

I would say that uncovering that three years after the £40 million potential allocations was announced that less than 25% is actually in the hands of researchers whilst being disappointing is also enlightening.

It has led us to get reassurances from ministers that the money isn’t going away, indeed that more could be available, and crucially it has helped us identify barriers to money getting where it needs to get to.

We can only remove barriers if we know what they are.

This is the very essence of the forthcoming APPG inquiry.

With funding the researchers will deliver, the route to the vaccine has taught us that, and in the last update, there was exciting research news from our QMUL centre. This week we have new papers from our centre in Plymouth and also from Bristol where the lead author is a great friend of the APPGBT Professor Kathreena Kurian.