New GBM pipeline and the bravery of parents 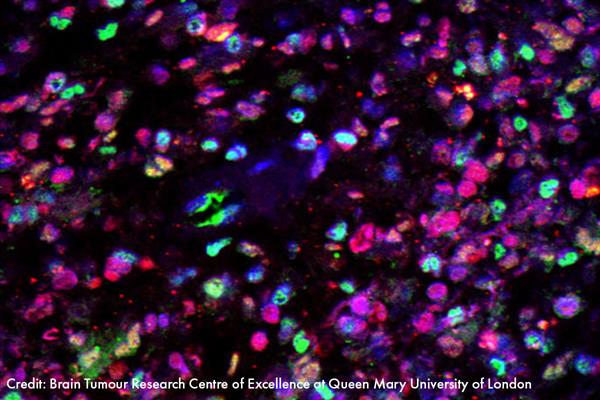 We are a research funding and campaigning charity – these activities go hand in hand on our pathway to a cure so, I am both pleased and proud to begin this week’s campaigning update with some research news.

Scientists funded by Brain Tumour Research, who have been studying the most common aggressive type of brain tumour in adults, have discovered a new way of analysing diseased and healthy cells from the same patient.

The work could pave the way for truly personalised treatment for patients diagnosed with glioblastoma multiforme (GBM). Only 25% of patients with this type of brain tumour survive for more than one year and just 5% live for more than five years.

A team at our Queen Mary University of London centre has established an entirely new experimental research pipeline which, in a trial involving ten patients, has revealed new insights into how GBM develops, identifying potential new targets for individualised treatments. It could also help predict a patient’s response to drugs currently in clinical use for other diseases which would be extremely valuable as the average survival time for this type of brain tumour is just 12 to 18 months.

Their paper, Comparative epigenetic analysis of tumour initiating cells and syngeneic EPSC-derived neural stem cells (SYNGN) in glioblastoma, is published in the high impact journal Nature Communications. Professor Silvia Marino, who leads the team, said: “We have used this powerful technique to identify changes in the function of genes that occur in GBM that do not entail a change in the genetic code (epigenetics). This has revealed new insights for how GBM develops and identified potential new targets for individualised treatments.”

We are very proud to be associated with this work and have been promoting it widely in the media. This week the PR team have also been working with families to tell their stories and raise awareness and the willingness of parents to share their stories leaves us all humbled.

Nadia Majid has been sharing the story of Rayhan and campaigning for increased funding into brain tumour research.

Rayhan Majid died from a high-grade medulloblastoma on 7th April 2018. The family is being supported by their MP Anum Qaisar-Javed ( see our update of 17th September for background on this including Anum’s contribution to PMQs).

Anum said: “Any life lost to cancer is devastating but the loss of a child is a tragedy most parents wish never to experience. Since losing her son Rayhan, Nadia has worked bravely to raise awareness of childhood brain tumours and fight for increased funding and research into the field.

“Brain tumours kill more children and adults under the age of 40 than any other cancer and it is essential that we do all we can to support young people and families who are living with these illnesses. It is vital that we increase funding for life-saving research to improve the outcomes for children and young people diagnosed with brain tumours.

“I am proud to support this cause and am honoured that Nadia has allowed me to share her story at PMQs to highlight the importance of improving funding and research into childhood brain tumours.”

So far, there have been 152 different stories about Rayhan in the media since the press release that we worked on with Nadia went out. The number of people reached has been 9.5 million!

Here is a just one of the articles.

Holly Roberts is another parent who has shared about her loss. It was her son Larsen – his photo featured in our #braintumourpetition report and Holly has continued to engage with her MP Nadia Whittome who this week wrote to ask the Secretary of State for Health and Social Care, “what steps his Department is taking to improve outcomes for brain tumour patients” and “what assessment he has made for the implications of his policies of the findings of the Level Up and Stop the Devastation Report from Brain Tumour Research on creating a dedicated levelling up brain tumour research fund?”

Many of you will remember Matthew Pullan who died aged 18 years old on the 9th September. This week his MP James Daly met with the Secretary of State, Sajid Javid. Mr Daly said “I met with Sajid Javid to discuss care and support for young people with cancer. Many of you will know Matthew Pullan sadly passed away earlier this year. Although @runningthrucncr (Matthew’s twitter handle) is no longer with us, it was a privilege to share his views with the Secretary of State.”

This week we have also been raising awareness of Dave (Did) Hopkins who is self-funding some of his treatment which is, of necessity, abroad. His wife Nicki, a fervent and passionate campaigner has expressed her anger and frustration at the lack of UK treatment options for her husband.

Nicki and Dave have galvanised the support of their local MP, Holly Mumby-Croft and earlier this year, the Scunthorpe politician spoke about Dave’s diagnosis in parliament and raised a Prime Minister’s Question (PMQ) about whether the PM would work with Brain Tumour Research to help improve research and treatment options for patients like Dave.

Speaking of Tom, The Wanted’ s singer has spoken openly about his brain tumour diagnosis in an  exclusive interview with Brain Tumour Research campaigner and fundraiser Amani Liaquat. The powerful 40-minute interview is the latest in Amani’s podcast series, Chat2Amani, and was recorded during a day of filming for the Channel 4 documentary  Tom Parker: Inside My Head.

Like Tom, Amani was diagnosed with a  glioblastoma multiforme (GBM) last year. Since her diagnosis, the 23-year-old has campaigned to raise awareness of the need for greater funding for research into brain tumours and better treatment options under the NHS.

During the interview, the pair discussed: facing up to their mortality at a young age; the severe lack of funding for brain tumours; the legacies they hope to leave; the mental resilience required to cope with their diagnoses; and the importance of family and re-evaluating the meaning of life.

Amani said: “Sadly, it often takes a celebrity being affected by an issue to make people stop and listen. I wish it wasn't Tom having to go through this journey as I totally understand how difficult it can be, but far too many people are dying in the UK because the treatment options have not changed in the past 20 years.

“Many families, like my own, are having to take the medical care of their loved ones into their own hands by raising hundreds of thousands of pounds to seek treatment in Europe or the US. I hope all the major ways that Tom can raise awareness, and in some way my small contribution with this podcast, can help make a change and ultimately save lives.”

To listen to Amani’s podcast with Tom, visit  youtu.be/8agdD9JiU2g

If you would like to find out more please visit their website. The deadline for all applications is Sunday 7th November.

Finally a reminder that there is a digital edition of Phoebe Frances Brown’s the Glad Game which can be downloaded and watched until the end of October.

“You don’t have to do much to be an actor; just be able to speak and remember lines. Two very basic things” she says.

In November 2018 Phoebe was diagnosed with an incurable tumour in the area of her brain that controls speech, language and memory.

A truly exceptional depiction of the patient experience and essential viewing for those interested in the emotions a brain tumour diagnosis brings.