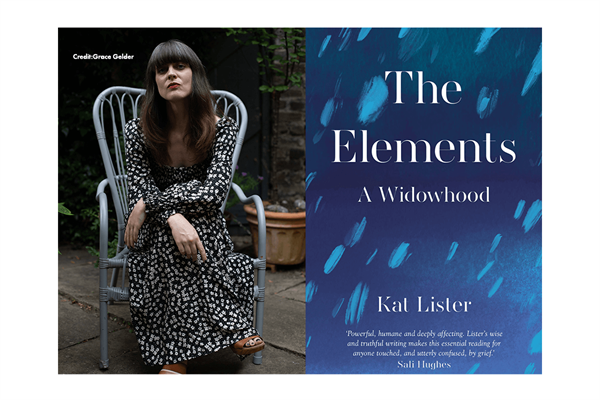 Before it overcame him in 2018, writer and journalist Pat Long attacked his brain tumour with a forensic almost professional curiosity.

Our Head of Stakeholder Relations, Hugh Adams, met Pat when he visited our Centre of Excellence at Queen Mary University of London (QMUL). Pat wanted to meet and talk with Professor Silvia Marino, whose life’s work has been researching the tumour type that was slowly, and then terrifyingly quickly, taking Pat away from his wife and soul mate Kat Lister.

Hugh spoke with Kat ahead of the launch of her extraordinary book – which has already mesmerised readers of The Sunday Times: The Elements – A Widowhood…

“Lockdown wasn’t a strange new state for me, the experience of isolation is one that I had been feeling during the period of caring for my husband. It often felt like we were in a bubble. I don’t think enough has been written about the physicality of being the carer and the psychological weight of bearing witness. The state of suspension and anxiety one feels when the extraordinary becomes ordinary.”

One of Kat’s main objectives was to create a narrative she couldn’t find on the bookshelves. “When I sat down to write The Elements, I did so with a clear aim,” she tells me. “To better understand dispossession, to illustrate what dissociation feels like, and to explore how bereavement can inhabit and subvert you – both physically and psychically.”

This has left Kat with an absolute conviction that there needs to be better support for carers in terms of practicalities, and in terms of emotional and physical wellbeing.

“When you become chief witness to a body in slow decline your own becomes collateral damage” she writes in a section of her memoir that looks at the devastating effects of prolonged trauma on those who watch on. “Anticipatory grief is defined as the cumulative grief that occurs before the impending death of a loved one,” Kat tells me. “Over the six years that my husband and I lived with his brain tumour, we experienced many losses, but the hardest to process was the removal of what we believed to be a ‘normal’ future.”

There was a six-year period from Pat’s diagnosis in 2012 to his death in 2018 and Kat is convinced they had this time together because they were able to access private healthcare. “I passionately believe in equality of access, not a ‘two-tier' system,” she says.

Pat’s tumour could only be 70% resected because of its proximity to his optic nerve. They both knew that the remaining 30% would eventually mutate and grow but when, how and what would the impact be? Every scan brought new anxiety and every promise of a new clinical trial dangled a carrot that could, just could, make a difference.

Kat and I did talk a little about the intertwining of grief and guilt that partners can feel that they could have done more. We also spoke about the language used around illness and death and Kat told me: “The language of loss is binary, and limiting in its simplicity. I didn’t lose Pat like I might lose a phone or my purse on my way to work. I often feel like we need to create a new language with which to talk about the complexities of bereavement.”

When talking about The Elements Kat is clear: “This isn’t a self-help book. I don’t believe that there are any rules when it comes to grief and loss. The only certainties you’re faced with, day after day, are absence and existence.”

As Kat writes in her memoir: “One minute you’re on your hands and knees on a supermarket floor begging your husband not to die and then you are at the deli counter in the same store only it’s three years later and you’re shouting because none of their pre-packaged meat caters for one.”

Kat told me: “Speaking about the viscerality of grief shouldn’t feel like a radical act just because I am younger than most. Although my story is an unconventional narrative, its function here is to say something universal about loss, love, identity and evolution. Themes every reader, regardless of experience, can relate to.”

This book glides between academic research to the guttural howls of bereavement visiting both the exotic and the mundane and as such is like no other I have read.

The Elements is a story of love, pain, hope and, ultimately, transformation https://iconbooks.com/ib-title/the-elements/