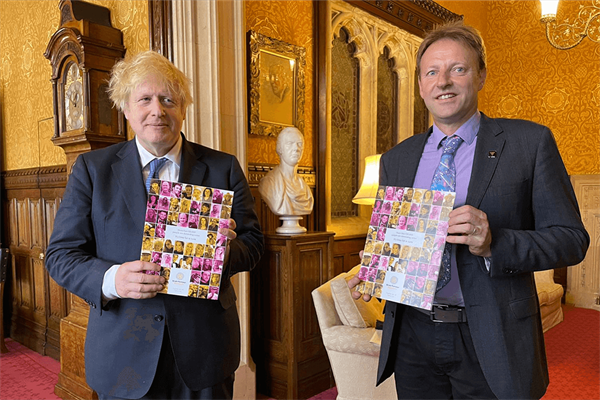 Parliament is now in summer recess returning on September 6th but the final few days of this session saw plenty of brain tumour related activity.

Firstly, the awaited photograph of our PM with the #BrainTumourPetition report happened. Presented to him by the Chair of the APPG on Brain Tumours, Derek Thomas MP, this handover had been agreed in March when Derek spoke at PMQs and drew MPs attention to Brain Tumour Awareness Month. Brain Tumours must have been in the PMs mind again in May when he spoke of brain cancer as being “an area that is too often neglected in our system and may fall through the cracks.”

Derek told us; “Time with the PM is limited and so alongside APPGBT officer Holly Mumby-Croft MP, I was pleased to take this opportunity. I believe the PM to have a real interest in this matter and look forward to further engagement with him on the need to progress better research funding for this devastating disease. How we have accelerated a Covid vaccine into the arms of the public is a shining example of what can be achieved with significant funding investment, an increased sense of urgency and a willingness to do things differently to make a real difference. The recently launched APPGBT inquiry into a ‘Pathway to a cure – breaking down the barriers’ will also be a piece of work that I will keep the PM abreast of and I will push for a meeting with him to discuss how best we can address the inquiry’s recommendations for this pathway to be adopted.”

In a wide-ranging letter Ms Mackinnell asked questions on areas such as basic research, international research collaborations, medical research charity funding, childhood brain tumours and future commitments. It was noted that new initiatives “are having a positive impact and laying the foundations for more high-quality UK-based future research in this field” but that “it is equally clear that there remains much more to be done in many areas – in particular, when it comes to promoting basic research into brain tumours, and research into childhood brain tumours with the worst survival outcomes.”

Lord Bethell’s response dated 7th July acknowledges that “Breakthroughs in basic science are much needed in brain tumour research” and that “Government support for basic science research is led by BEIS and UKRI who know best how to stimulate such research in under-served areas.” Lord Bethell goes on to say that “We are also exploring with UKRI-MRC other ideas with the most promising potential to make an impact in the basic science arena.”

It is this basic science that we at Brain Tumour Research believe will underpin all clinical innovation and that is why our campaigning work is so focused on it.

Lord Bethell concludes “Brain cancer research will continue to be a priority into the future, and we fully expect to be involved in this area of research for the long-term, especially given the efforts of UKRI to develop the basic science space so we have more to work with in future.”

Our Chief Executive Sue Farrington Smith commented “We welcome this response from Lord Bethell. It may not be revelatory but it does help us as we support the APPG on Brain Tumours with their inquiry ‘Pathway to a cure – breaking down the barriers.’ The Government position is clearly not only to spend the £40 million made available through the NIHR in 2018 – and more if necessary - but it also acknowledges the need for funding the early-stage research at the beginning of the translational pipeline – without this UKRI funded discovery science there will be no throughput to clinical trials. This reply is joined up thinking of the type that we have been saying is needed to unlock the complex problems brain tumours uniquely pose.”

Also, this week a new £340 million fund to help fast track life-saving treatments for rare conditions has been announced by the NHS. The Innovative Medicines Fund will allow patients to have early access to the most clinically promising treatments without the need for lengthy assessments. I canvassed the views, as I very frequently do, of the Chair of the Brain Tumour Research Scientific and Medical Advisory Board (SMAB) Emeritus Professor of Neurosurgery, Garth Cruickshank. Professor Cruickshank feels that this IMF initiative appears to be very good news for brain tumour patients. He said “for GBM patients this is a real step forward as their life expectancy is so poor that they may not live long enough to be well enough to take such a new drug or to benefit from it. Importantly this initiative starts to unravel the conventional wisdom of having a long runway of testing before access to patients in a situation where such an approach has not borne much fruit in the last thirty years.”

Earlier in the week the DVLA sent us a proposed new brain tumour classification for DVLA purposes, and a letter inviting us to comment. Until the contents have been finalised, we are unable to make the proposed content public but are pleased to be a part of the consultative process. Coincidentally Professor Cruickshank started on this revision in 2017 with the aim to update around new molecular classifications and to give a much more realistic risk stratification for the range of brain tumours.

He told us “My plan was always to get people back to driving where we could, but it is always a compromise between individual risk, population risk and DVLA policy enshrined in law.” Keep reading these weekly blogs for DVLA updates.

Released yesterday, so we haven’t had a chance to really digest it yet, was the government’s research and development (R&D) people and culture strategy. This strategy sets out government’s ambition to build the research and innovation workforce the UK needs, working in a positive and inclusive culture. Following hot on the heels of the government’s new UK Life Sciences Vision this is part of a really encouraging direction of travel.

Wednesday was GBM awareness day in the US and in the UK Brain Tumour Research have been holding our first #GBMAwarenessWeek to shine a spotlight on this type of tumour. Please click on the link to read the powerful stories that we have been sharing and the hope that lies in the research we are funding.

When I started working for Brain Tumour Research over a decade ago the idea that the Prime Minister would willingly receive a report on research funding was an ambition. This week that happened. As did a health minister responding to detailed questioning on brain tumours from a committee of MPs. Wow – our determination and focus are ensuring results - we have come a long way and the stories of #GBMAwareness week remind us of why we are determined to change things and why they won’t be forgotten.

There won’t be a campaigning update next Friday, but it will return on 6th August.