What happened at the APPGBT 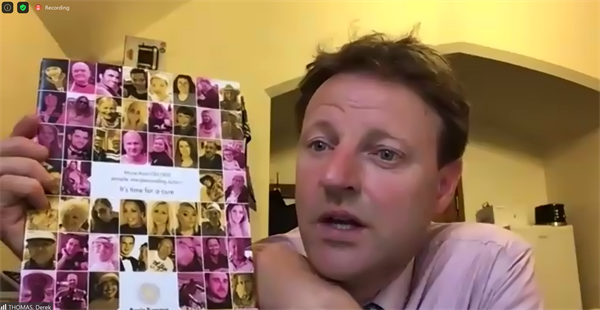 The usual way to record what has happened at a meeting, and what are the agreed actions to be taken forward, are in the meeting’s minutes. In the wake of Tuesday’s meeting of the APPG on Brain Tumours the minutes are being ratified by the Chair, Derek Thomas, and will be on our website early next week.

However, for those of you who would like to know what happened now, then here we go.

The first thing that has to happen at an APPG is that we are quorate – we have to have five parliamentarians in attendance before we can conduct any business. On Tuesday there were no worries here, in fact we had our best attendance by MPs for a while.

It was thrilling, as at 09:00, names wishing to join the meeting kept flashing up, including MPs we had no idea intended to join us – they can only have known about the event through you, our campaigners, getting in touch with them. Thank you

This is the list of Parliamentarians who joined us at the APPG and doesn’t include those who would have liked to have joined us but were already committed to other meetings:

The first bit of business was to elect the Chair of the APPG and we were delighted that Derek Thomas put himself forward for re-election. He was successful. Derek is a powerful and passionate advocate and our community is very lucky to have him as a champion.

Next came the election of officers. The purpose of the officers was read out. It was made explicit that “the APPGBT needs supportive officers who will work with the Chair and the Secretariat to support the APPG on Brain Tumour’s objectives. They do this by maintaining the political momentum for change, using their political influence to ask questions and hold the Government to account, all with a shared vision of improving options and outcomes for those diagnosed with a brain tumour”.

A review of the APPG’s year followed, and what a year it has been for all of us, during which the APPG held three virtual meetings. Subjects covered at these meetings included:

Following this review came a presentation from Professor Silvia Marino on the nature of the research she leads at our QMUL centre and how it feeds into the research pipeline that translates what is happening on the scientists’ bench into something delivered to the patients’ bedside. Professor Marino was actually on holiday this week but worked on her presentation and delivered it at the meeting anyway. She is passionate about, and dedicated to, her work and like Derek we are very fortunate to have her working to make a difference for brain tumour patients. We will turn her presentation into a blog so you can all have access to her views on brain tumour specific challenges and how we convert these challenges into opportunities.

Brain Tumour Research’s Head of PR & Communications, Sue Castle-Smith, followed Silvia with an impassioned presentation on the Brain Tumour Research Petition Report, giving a flavour of the anger, despair and hope felt by patients and their families who are desperate for a cure. When talking about writing this Levelling Up report, which contained so many of your stories she told the meeting “above all, we heard about people’s hope and confidence that, by coming together, they could be part of change …they came forward and shared their stories, sometimes of their most intimate family moments which they had not spoken about so openly before. They did so in the hope that we can work together to make something happen.”

So, what next for the APPG?

The APPG will work to respond to the calls from the brain tumour community and to reflect the concerns expressed in the Levelling Up report. The report will be delivered to Prime Minister Boris Johnson by Derek Thomas MP as agreed at PMQs in March.

The NIHR £40 million will continue to be an area of focus, as will be seeing what opportunities there may be for more discovery science funding from the MRC, as well as making sure the APPG keeps abreast on what is happening, scientifically, clinically and within industry too.

This is going to be wrapped into an APPG inquiry which will seek to establish how successful the research and development of the treatment of brain tumours is in the UK.

Specifically, the APPG inquiry will seek;

Brain Tumour Research continue to be proud to provide the secretariat to the All Party Parliamentary Group on Brain Tumours and to have been instrumental in its formation in 2005 through its member charities and with the support of John Bercow former MP and Speaker of the House of Commons.

This APPG was a very positive experience. The next one will be in July. Will it be virtual or will we be at Westminster? We don’t know, but what we do know is we will bring the same strength of purpose, the same desire to improve the current situation and the same determination to push forward to make a difference as we all have in the past year. We have new allies in Parliament, we have you, our campaigners, and we have an inquiry to set up.

Working together we have enough to make the change we so desperately need.

APPG Report – Brain Tumours – A cost too much to bear?
Supporters make headlines as our Petition Report launches