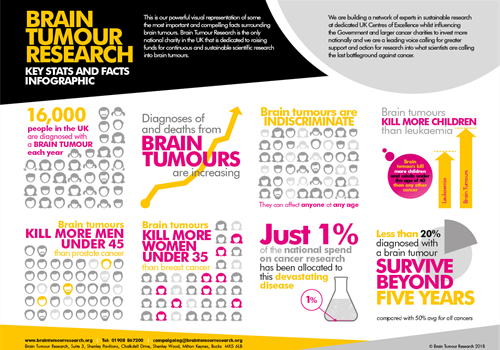 With 10 days until Brain Tumour Awareness Month (BTAM) and with the House of Commons in recess you might have thought this week would have been the calm before the storm but I’ve got to say that it feels that we are in the midst of the storm already.

The whole of the Brain Tumour Research team is flat out supporting everyone taking part in our 10,000 Steps a Day in February Challenge – the Facebook group has nearly 15,000 members and income is already past £500,000!

The minute’s silence at our research centres at 11:00 on Monday March 1st will therefore be a moment of calm and reflection at the beginning of BTAM, and thank you for those of you who emailed me last week wanting to join our team online, observing a virtual minute’s silence together – you can still join us, just email me (hugh@braintumourresearch.org).

Plans for the APPG on brain tumours taking place on the morning of 2nd March are advanced now and it will be the platform at which the Tessa Jowell Brain Cancer Mission (TJBCM) announces successful centres receiving Tessa Jowell Centre of Excellence designation.

I have been busy inviting MPs to join us for the APPGBT with encouraging responses received. As many of you know, the first thing to ensure is that we have at least five Parliamentarians in attendance for the meeting to be quorate and taking into account current acceptances that shouldn’t be a problem (trying not to tempt fate here). We will be having the APPGBT’s AGM in May which will include the election of officers and that is a meeting I will definitely be asking for your support in getting your MP to join us. I‘m guessing that will still be a virtual meeting and I have to be honest in saying that getting attendees on a Zoom call is quite a bit easier than getting them to assemble in Portcullis House.

One other key part of BTAM until recently was our Speaker’s House receptions. The former speaker John Bercow was a great advocate for Brain Tumour Research and this event was an annual highlight. Clearly Mr Bercow is no longer in office and the idea of actually attending an event in person still seems a long way off, so what shall we do?

Shall we just not have an event this year?

You are all invited and the great thing is that it doesn’t cost anything to get there - you do have to bring your own drinks though and invite your MP!

Once again please email me if you’d like to join us.

At the end of BTAM on Friday 26th March is Wear A Hat Day, which is my absolutely favourite campaign. See next week’s update for news on how we can get our politicians publicly supporting the UK’s premier brain tumour awareness raising campaign.

Actually, that isn’t quite the end of BTAM activities because at the end of the month we will be delivering the #braintumourpettion to the Prime Minister. By then we will be looking back at BTAM rather than hurtling toward it and I know we will have a sense of collective pride at what we achieved with the petition.

It was tweeted about yesterday by Dr Karol Sikora – why did he do that?

He did that because he was asked and he was asked by my colleague (I’ll spare her blushes) who said at a team meeting she thought as a health influencer on Twitter he would be someone we should ask to support the petition.

She asked, he tweeted.

Two questions for all of you

The other thing all Brain Tumour Research team members have been challenged to do is three different things each to get further petition signatures - mine involve celebrity supporters, LinkedIn and internal communications in one large corporate.

I’ll send out a petition update early next week.

I did have a couple of meetings with MPs this week too which always leave me feeling enthused and optimistic because each one is a milestone, a step in the right direction and also a recognition of just what we have achieved together as campaigners for Brain Tumour Research.

The next month is going to be quite something I hope you will all get involved as much as you can.

I am both proud and thrilled by the way campaigners become fundraisers and fundraisers become campaigners, about how you tell your stories as our ambassadors and what you do to raise awareness. You are the reason we are bucking the trend, so thank you for what you have done, what you are doing, and what you will do, to support Brain Tumour Research