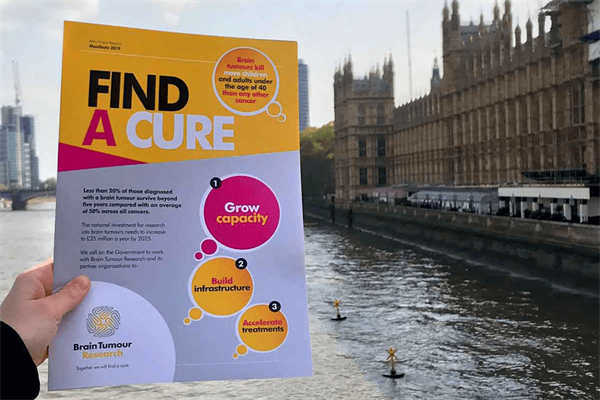 One of the opportunities that campaigning for brain tumour research presents is the number of targets we can aim for.

Funding for research into brain tumours is a health issue, right? Of course, it is, so let’s lobby Rt Hon Matt Hancock MP the Secretary of State for  The Department of Health & Social Care (DHSC) – however although he is the Head of the Department, we must lobby Jo Churchill MP too as she is The Parliamentary Under Secretary of State for Prevention, Public Health and Primary Care and leads on major diseases.

Hold on though The Parliamentary Under Secretary of State for Innovation (part of DHSC too), Lord Bethell, leads on the policy areas of medicines and research so he needs to be kept in the loop too.

But the Department for Business, Energy & Industrial Strategy (BEIS) has responsibility for science, research and innovation and that is headed up by The Rt Hon Alok Sharma MP!

However, our research takes place at Universities so we need to make sure that Secretary of State for Education The Rt Hon Gavin Williamson CBE (everyone’s favourite at the moment right?) knows what’s going on and to include his minister with responsibility for Universities, Michelle Donelan in communications.

As we have said before the health of scientific research is a barometer of our economic status and so the government must underpin medical research charities like us because our research is in jeopardy, and that financial underpinning comes from The Treasury and that is led by Rt Hon Rishi Sunak MP, our Chancellor,  so we need to let him know what we are asking for.

He has made some funds available for charities ( which as a research funding organisation we are unable to access) and the Government department with responsibility for charities is the Department for Digital, Culture Media and Sport (DCMS) with the Secretary of State being The Rt Hon Oliver Dowden CBE MP, although Baroness Barran MBE was appointed Parliamentary Under Secretary of State at DCMS with ministerial responsibilities including civil society, and that means charities, so we would do well to make sure they know all about Brain Tumour Research.

Well Boris Johnson our Prime Minister, plus every other MP because as your elected representatives they must represent their constituents, and if their constituents are telling them that research funding is in jeopardy and must be protected and that there must be parity of funding with breast cancer and leukaemia meaning an investment of £35 million per annum, they must reflect that back at Westminster.

As I mentioned last week we want to work with the noble Lords in the Upper House as well as the House of Commons. They can compel ministers to make statements about the questions they ask – so we must make sure they are asking the questions we want to hear the answers to.

For our campaigners in Scotland, Northern Ireland and Wales you will already know that the departments mentioned above are formed around matters that are devolved, meaning power has been transferred from central government to your national Parliaments.

All of this just means more and more opportunities and we have a strategy for the engagement at Stormont, Holyrood and the Senedd

We are a UK wide charity focussed on cross-party lobbying to those most appropriate to hear our call and we will complain and campaign to get the support we need to make that difference and ultimately fund that cure.

Of course, one way we can all get involved and support Brain Tumour Research is our petition and news so far on this is great – not even launched a week ago and we already have over 5,000 signatures!

Well done everyone who has signed and shared. Thank you. Let’s keep it going. If you haven’t signed yet please do. Post on your social media and let your friends and colleagues know why you’d like them to sign by sending them an email reminder.

Your help going forward is invaluable – you make us who we are.