Our petition is launched – a campaigning blog 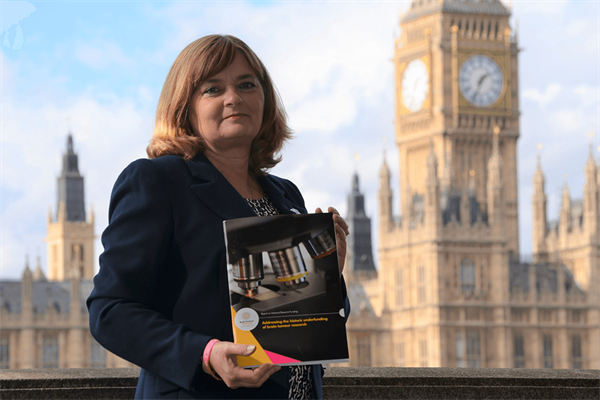 It is almost five years ago to the day that I took my first call from Maria.

She wanted to tell the story of her brother Stephen Realf a trainee RAF pilot diagnosed with a brain tumour and taken from his family aged 26.

Maria worked for the Mail On Sunday, so we knew that the story would reach many people, but Maria and the family were keen that the piece had a call to action, something that people reading the piece could do if they had been similarly affected, or if they felt the outrage the family felt about the lack of research funding into the disease that had ripped their lives apart

We decided to work together and in August 2015 we launched an e-petition which you can read here. The petition call will be one you are all familiar with “Fund more research into brain tumours, the biggest cancer killer of under-40s … The charity is calling on the Government and larger cancer charities to raise investment to £30-£35 million a year”

Initial excitement delivered thousands of signatures and then retweets from Piers Morgan and the like bought in new signatures, but we only had six months to get 100,000 e-signatures.

During that six-month period and recognising the depth of feeling on this subject, and motivated by extraordinary performances by members of Stephen’s family at Westminster meetings, the Petitions committee compiled a report "Funding for research into brain tumours" which was published in March 2016. Among its findings were that;

“Brain tumour patients have been let down by a lack of leadership from successive governments. The Governments response to the petition which prompted this inquiry gave us little reason to believe that the Department for Health had grasped the seriousness of this issue… The already-stretched voluntary sector is left to find and fill the gaps in research funding. In doing this, successive governments have failed brain tumour patients and their families for decades. The Government must now put this right.”

For a community that had hitherto felt ignored and impotent, this was extraordinary but more was to follow as, with new momentum, the petition surged past its 100,000 target ending with 120,129 signatures. It was a thrilling time as the petition went viral with so many supporters sharing, and doing so much to make that difference, that together we e-marched 120,000+ people to Westminster to demand change, to demand parity of funding. It was the greatest mobilisation of brain tumour activists ever.

So from the e-petition came the memorable Westminster hall debate ( watch or read here) then the DHSC Report which was released around the same time as Dame Tessa Jowell sadly died as a result of her GBM.

Two Government statements followed in 2018 announcing a fund totalling £40 million to be made available for brain tumour research over the next five years. Coinciding with this Cancer Research UK (CRUK) announced a £25 million investment over the same period

At that time, then Health Secretary, Jeremy Hunt spoke of a “chance to create a genuine, step change in survival rates for one of the deadliest forms of cancer.”

So, two years ago the charity, the Realf family and the legions of brain tumour campaigners and activists, as well as ordinary folk who saw that there was an injustice that needed addressing, had influenced an injection of £65 million into brain tumour research. Totalling £13 million per annum it wasn’t the £35 million per annual, and parity, we had campaigned for, but it was start.

Or was it? – we now know that only £6 million of the Government money has been allocated. We know that in the time of the pandemic CRUK has cut £150m from its annual research funding budget.

Where does that leave brain tumour research?

Brain tumours remain the biggest cancer killer of children and adults under the age of 40 and funding for the discovery science that will deliver the building blocks for “a genuine, step change in survival rates” remains woeful and inadequate. The nation needs to invest at least £35 million a year if we are to find a cure for brain tumours in the next 20 years.

So what to do?

It is time for a petition and that, my campaigning colleagues, is what we are launching on our website today.

Please sign our petition calling for increased national investment into brain tumour research to £35 million a year and please add the reasons why you are signing.

We have made a difference; we will continue to make a difference, we will hold people to account and we must achieve the parity of research funding we were asking for five years ago. Signing the petition today must be your first step in supporting this journey. Parity for brain tumour research – it must be the same for brain.