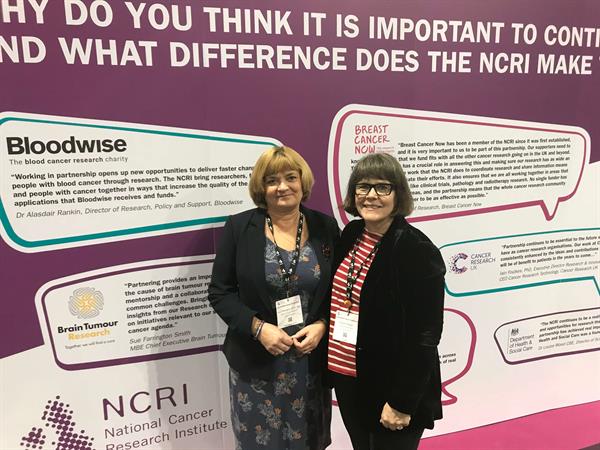 This week saw the annual National Cancer Research Institute (NCRI) Cancer Conference in Glasgow. The UK’s largest cancer conference included several presentations of relevance to brain tumours. Of particular interest to our community was a presentation about the chemical analysis of blood samples being combined with an artificial intelligence programme to possibly speed up the diagnosis of brain tumours. The test works by detecting chemical clues shed by brain tumours into the blood and could be a part of improving brain tumour survival one day by making diagnosis quicker.

Brain Tumour Research is proud to be a member of the NCRI, a UK-wide partnership between cancer research funders, which promotes collaboration in cancer research, NCRI members work together to maximise the value and benefit of cancer research.

Our Chief Executive Sue Farrington Smith MBE said, “The NCRI delivers mentorship and a collaborative environment for addressing common challenges. Bringing our community’s voice and insights from our Research Centres, we can lead work on initiatives relevant to both our site-specific and the wider cancer agenda.”

In addition to facilitating knowledge sharing between cancer charities, another important activity of the NCRI is collecting data on the amount its membership spends on research, what type of science they are funding and which cancer is being studied. As the NCRI comprises a wide range of cancer charities and major UK governmental funding bodies, the NCRI’s research funding database is perhaps the most authoritative source on what the UK spends on cancer research.

Analysing the NCRI’s research funding database reveals that cancers that receive sustained research funding, such as breast and leukaemia, have, in turn, seen improved survival rates. Over the last 10 years, breast cancer received 8% of the cancer research spend recorded by the NCRI, with leukaemia getting 6%. Unfortunately, over the same 10-year period brain tumours received only 1% of this research spend.

Perhaps a small crumb of comfort is that the NCRI research spending database does reveal a steady growth in amount dedicated to research into brain tumours. In the first-year data was collected (financial year 2002/03) less than a million pounds was spent on brain tumour research by NCRI members, the latest figures (financial year 2017/18) show this figure as over £11.5 million. Even adjusting for inflation, this is a huge increase and testament to the hard work of both brain tumour fundraisers and campaigners since the turn of the century.

This is all moving in the right direction but there is still so much more to be done if brain tumours are to achieve research funding parity with cancers such as breast and leukaemia. The cornerstone of Brain Tumour Research’s Find A Cure manifesto is our call, to both Government and larger cancer charities, for the national investment for research into brain tumours to increase to £35 million a year by 2025 (a figure which equates to the long-term average spent on cancers like breast and leukaemia).

Only when the historic underfunding of brain tumour research is rectified will we start to see new curative treatments and better methods of diagnosing this devastating disease.