John Bercow: Our thanks to a brain tumour champion 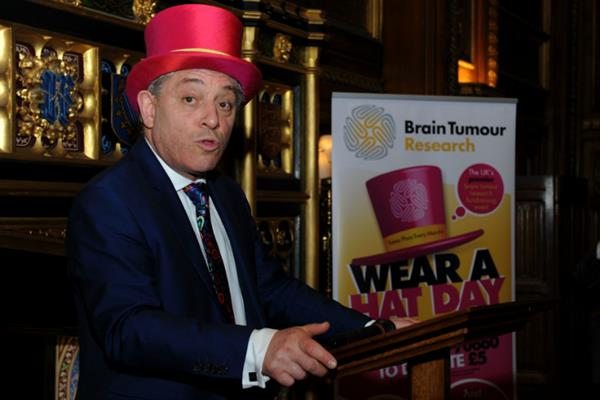 This week is the last that the Rt Hon John Bercow MP will serve in his role as Speaker of the House of Commons, a position he has occupied since 22nd June 2009. He will step-down as both Speaker and the MP for Buckingham next week.

Much has been made of John’s sometimes withering put-downs of MPs, delivered in John’s grandiloquent style. International media have also focused on John’s interventions during parliamentary debates, most notably his use of the word ‘Order!’, said nearly 14,000 times during his tenure as Speaker, often in a booming voice (although someone with John’s impressively wide vocabulary might choose the adjective ‘stentorian’ to describe the volume of his speech!)

Away from the theatrics of the Commons Chamber, John has used the power and prestige of the Speakership for good. Colleagues have praised John as a “formidable” force in ensuring that government is accountable to MPs and making Parliament more accessible to children, those with disabilities and LGBT people.

We are humbled that John has been a key supporter of our cause and a Patron of Brain Tumour Research. John was alerted to the plight of brain tumour patients and their families in January 2004 when our Chief Executive, Sue Farrington Smith, shared the story of the loss of her beloved niece Alison Phelan, three weeks before her eighth birthday in June 2001.  Having led the coming together of brain tumour charities across the UK she also highlighted the woeful underfunding for research into brain tumours and the lack of information and support.

In April 2004, John led the first-ever debate on brain tumours in the House of Commons and was shocked at how little attention had been paid to brain tumours. He was particularly touched by the stories of children, commenting “there can surely be few more tragic or heart-breaking experiences than for a parent to discover that their child has a brain tumour.”

John has also kindly provided Brain Tumour Research use of the Speaker’s State Apartments for our flagship ‘Speaker’s House’ event, held annually during Brain Tumour Awareness Month (March). This has provided us with an opportunity to thank our supporters and fundraisers for all their hard work, as well as raise awareness of brain tumours amongst Parliamentarians.

Beyond being a parliamentary champion for brain tumours, John has supported Brain Tumour Research in his constituency. He raised over £5,000 via a sponsored-swim, participated in our ‘ On Yer Bike’ campaign and attended various events over the years, all of which have been invaluable in helping us publicise the plight of brain tumour patients and their families.

On behalf of the brain tumour community, Brain Tumour Research would like to take this opportunity to offer John our heartfelt thanks for his years of steadfast support. We wish him all the best with his future endeavours.