APPGBT on seizure prevention and the ketogenic diet 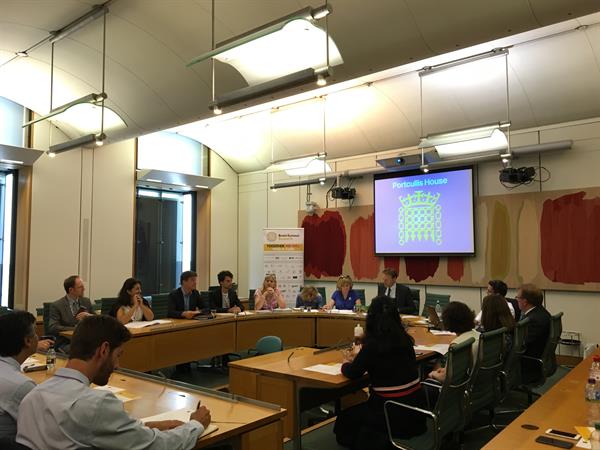 With the AGM finished, the APPGBT then heard from experts on the topics of seizure prevention and the ketogenic diet.

Following the update from the meeting with the Health Minister, the meeting turned its attention toward the first speaker, Mr Ashan Jayasekera, Neurosurgical Trainee & Researcher, University of Newcastle. Mr Jayasekera explained to the audience his specific area of research – improving ways brain tumours can be treated surgically. His particular area of interest is gliomas – a type of tumour that is notoriously difficult to treat. He explained how gliomas often caused patients to have seizures. Traditionally, an effective way of treating seizures in patients with gliomas is to remove the tumour and some of the surrounding brain tissue. However, it is often difficult to know which bits of the surrounding brain tissue need be removed to improve seizure control for patients. The standard way of doing this is using an invasive technique called electrocorticography, however, this is not especially effective and carries risks.

Given this, Mr Jayasekera explained there was a clear need for a more effective, non-invasive procedure and this is what he and his team are committed to researching. While they had made significant progress in the field, they were inhibited by a lack of funding and human resources. Questions were then taken from the meeting attendees and Mr Jayasekera answered on the specificities of the work he is leading. One attendee said that it was encouraging to see he had been able to raise money from a neuroscience, rather than a cancer research, charity and hoped this could happen more often.

Sue Wood, a dietician from the charity Matthew’s Friends, was the meeting’s next speaker and proceeded to give an insight into the overlap between ketogenic diets and brain tumours. She explained that ketogenic diets essentially mimic fasting. They are low-carbohydrate, adequate protein, high fat diets that by manipulating fat to become the dominant fuel source, cause alternative metabolic signals to be sent around the brain and the rest of the body. Ms Wood explained how this fuel switch had been used to treat epilepsy since the 1920s, but it is a less common treatment in brain tumours. She explained that research had revealed how ketones, an energy source converted from the fat, become an alternative fuel for the brain and how this changes the chemistry in the brain’s antioxidants and gene expression. In turn, this regulates inflammation and alters gut microbiomes.

Ms Wood said, based on the small clinical studies which had been undertaken, it had been established that the changes in metabolism had targeted signalling pathways which reduced the migration and invasion of tumour cells. However, these clinical studies were small and the long-term effects of them had not yet been evidenced. With that said, it was clear there was an argument for how ketogenic diets improved quality of life, whatever the clinical assessments.

The APPG then heard from two patient speakers, Dr Neil Bindemann and Andrew Scarborough – individuals who had only realised the benefits of ketogenic diets because of their expertise in the brain tumour/neurosurgical field. Their understanding of their own condition meant they were both inclined to adopt ketogenic diets, despite the fact that no healthcare professional had suggested the diet to them. Dr Bindemann said if healthcare professionals were to give people the opportunity to try ketogenic diets, it would allow for a wider research base around metabolism and tumour growth. Mr Scarborough agreed, saying it was important to raise awareness of the benefits of ketogenic diets (or metabolic diets as he would prefer them called) given how much it had improved his own quality of life.

We extend our grateful thanks to everyone who has attended, spoken at or contacted their MP about APPGBT meetings this year. The next APPGBT meeting will take place in Autumn/Winter 2019.

Brain Tumour Research Member Charities established the APPGBT in May 2005 and continue to act as secretariat.