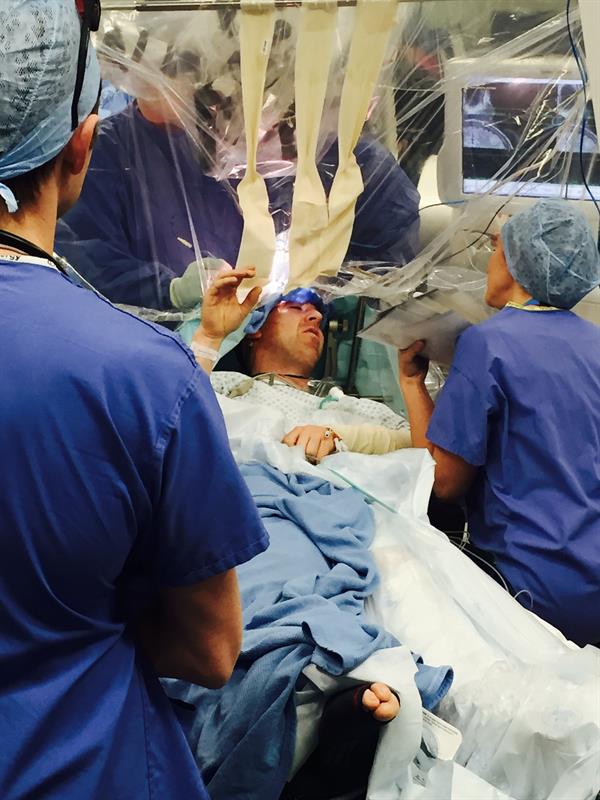 08 April 2019 by User Not Found
Performing any kind of operation on the brain comes with obvious risks, so an awake craniotomy is a fantastic technique used to try and reduce these.

You may have seen our supporter and brain tumour patient Cameron Ray on TV recently. He appeared on the BBC Breakfast programme on Monday 8th April and will be on Surgeons: At the Edge of Life on BBC 2 on Tuesday 9th April. The show focused on Cameron’s awake brain surgery, that he went through in July 2018.

Neurosurgery is an operation on the brain. This is usually the first step in the treatment for most types of brain tumours. The aim is to remove as much of the tumour as possible whilst avoiding any damage to other parts of the brain.

A craniotomy is performed by temporarily removing part of the skull so that the surgeon can access the brain and remove as much of the tumour as possible.

These days, more of these surgeries are being performed by giving patients a general anaesthetic during the first part of the operation to remove part of their skull, but then waking them up during the actual removal of the tumour, before putting them back under anaesthetic for the final part of the surgery in which the skull is safely repaired.

Why is it done?

Performing any kind of operation on the brain comes with obvious risks, so awake brain surgery is a fantastic technique used to try and reduce these.

Normally a neurosurgeon will choose to perform an awake craniotomy when the tumour involves or is close to parts of the brain that control vision, movement or speech that are vital to preserve in order to avoid potentially life-changing damage.

The surgical team will ask patients to perform a series of tests whilst they are operating, which complements the extensive brain mapping done beforehand and the live 3D computer images that they are also able to use for guidance during the operation. The patient’s speaking, reading, and movement therefore helps the surgeon to map the safest route to be able to remove the tumour and, crucially, determine how much of the tumour is safe to remove without causing damage that would have a severe impact on the patient’s quality of life.

The experience can be a little surreal. The patient lies there with part of their skull open, with no sensations of pain. They can see the team in front of them and talk to them. They are able to move their arms and legs during the operation, though naturally their head needs to remain completely still and is held securely in a frame to ensure that this is the case. Some patients have been known to play guitar during the operation, which helps guide the medical team to preserve the neural pathways needed to perform this complex task.

Surprisingly, no it isn’t painful. Even though the patient is awake during the actual brain surgery, they don’t feel any pain. This is because the brain doesn’t have any pain receptors so the surgeon can operate without risk of causing pain.

Waving goodbye to the tumour

Our supporter and former brain cancer patient James Hinnigan allowed us to film his awake craniotomy. Despite having his brain operated on, James didn’t lose his sense of humour. His surgeon, Mr Kevin O'Neill, leading neurosurgeon at Charing Cross Hospital, showed him the tumour after he'd removed it from his brain, at which point James said: "Don't come back and don’t bring any friends.”

James recovered well from surgery and, although his prognosis was positive, he was unemployed and felt increasingly isolated. He struggled with depression and anxiety. Now, with his driving licence reinstated and back in work, James is positive about the future.