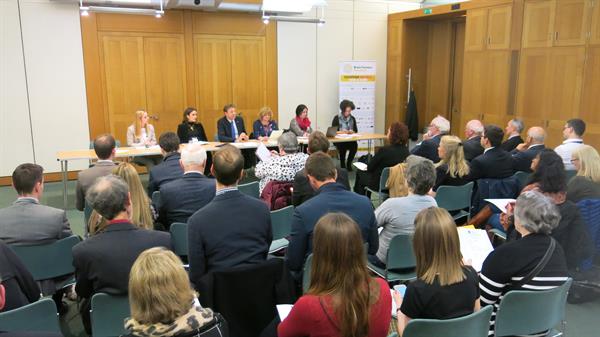 Chair of the APPGBT, Derek Thomas MP, began the meeting by expressing his delight at the level of support Parliamentarians had shown towards Brain Tumour Awareness Month, with 65 MPs and Peers attending a ‘Wear A Hat Day’ photocall in early March 2019. On the same day, the Prime Minister had also praised the work of the APPGBT in the House of Commons.

Dr Nicky Huskens, TJBCM Director and Jess Mills, daughter of Baroness Tessa Jowell, gave the audience a summary of the TJBCM’s work. Jess explained how the TJBCM was a convening body bringing together brain tumour charities, researchers and clinicians. The TJBCM was established to improve outcomes for all brain tumour patients, irrespective of their background. The TJBCM hopes to achieve this by targeting five key areas which need to be addressed; research, data, patient experience, training and clinical trials.

Dr Huskens explained how the TJBCM was examining, in detail, topics such as the best models of care (focusing on the ‘Cambridge Model’), improving early diagnosis and ensuring there are enough specialists to treat brain tumours. Dr Huskens also stated that the TJBCM wanted to help improve research into brain tumours by attracting experts from adjacent scientific fields to add academic weight to projects.

Continuing a theme raised in its 2018 Inquiry into the economic and social costs of brain tumours, the APPGBT also heard from Vicky Ringer, co-founder and Trustee of the children’s brain tumour charity Levi’s Star. Vicky is a doctoral researcher at the University of Leeds studying the effects of a brain tumour on children’s education.

As a Special Educational Needs teacher herself, Vicky saw there was no specialised programme for children returning to school after having a brain tumour. These children may return to school suffering from cognitive difficulties, short-term memory, fatigue and/or physical impairments etc.

In order to tackle this problem, Vicky is conducting qualitative research to get a more detailed understanding of children’s experiences. Her research has shown teachers would benefit from specialist training, so they are better equipped to support children, and that a standardised pathway of support should be developed. This is particularly important for teaching assistants, who often work with some of the most vulnerable children.

Derek Thomas MP concluded the meeting by thanking all of the speakers and then highlighting the forthcoming Social Care green paper, which he believed could be too focused towards meeting the needs of older people. Derek thought it was important that the brain tumour community speak up to ensure the green paper also provided for those with a brain tumour, particularly paediatric patients. Brain Tumour Research will monitor the development of this green paper.

We extend our grateful thanks to everyone who attended the APPGBT meeting and provides support to the APPGBT’s activities.

Brain Tumour Research and its Member Charities established the APPGBT in May 2005 and continue to act as secretariat.