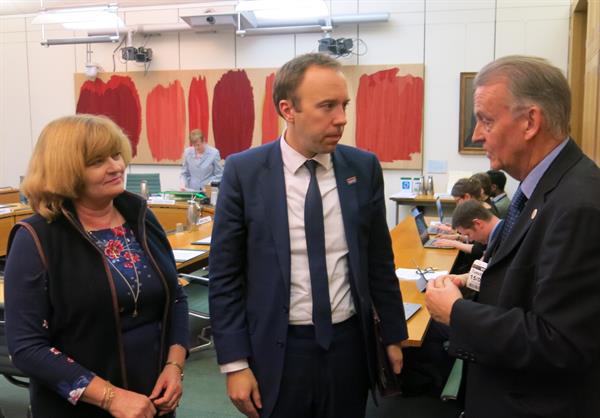 It is now nearly three years since the Petitions Committee published its report “Funding for Research into brain tumours” initiated by our campaigning work and an e-petition of 120,129 signatures calling for more funding for research into brain tumours. The report called on the Government to take remedial action to correct decades of under-funding, improve awareness, medical training and diagnosis and ensure better use of drug treatments.

We were, therefore, delighted to witness the Committee follow up on its March 2016 report with an evidence session, held in Westminster on 15th January.

Answering the Committee’s question was the Rt Hon Matt Hancock MP, the Secretary of State for Health and Social Care, joined by Mike Batley, Deputy Director of Research Programmes for the Department of Health and Social Care (DHSC), and Dr Helen Campbell, Portfolio Manager for DHSC Research Networks, Cancer Research, and Clinical Research Facilities. A full transcript of the session can be found here.

Throughout the session, the cross-party committee, chaired by Helen Jones MP, directed questions to the witnesses around key areas of concern: progress on the Task and Finish Working Group report, allocation of the Government funding announced in 2018, and how the Tessa Jowell Brain Cancer Mission would fit in with and continue the work of the Task and Finish Working Group.

Helen Jones expressed concern about the potential for the Tessa Jowell Brain Cancer Mission to replicate the work of the Task and Finish Group, which she added, is particularly concerning when five-year survival rates for brain tumour patients are so poor. “There is no time to replicate work already being done,” she said. While Dr Helen Campbell offered reassurance that continuity exists, Helen Jones said it would be an area the Committee would revisit in the future.

When the discussion turned towards funding and finance, Matt Hancock confirmed that the £40 million Government pledge had been ring-fenced for brain tumours from the £1 billion total National Institute for Health Research (NIHR) budget. He also confirmed that the NIHR had received 20 funding applications since the research highlight notice was issued in April 2018, with two having been successful and eight still under review.

Mike Batley also explained that funding had been introduced throughout ‘the pipeline’ from undergraduate to professorial grants, which would ensure researchers would remain in/be drawn to the UK research industry, helping to build capacity. Not surprisingly, Brexit was raised with a specific question around the impact the UK leaving the European Union would have on the UK’s ability to retain researchers. Matt Hancock assured the Committee that there would be little impact and that the recent Immigration White Paper would clarify the legalities. He added that the Government wants to ensure research collaboration across the world as well as continuity of existing clinical trials.

Finally, questions were pitched to the witnesses regarding the Accelerated Access Review (AAR), a mechanism within the NHS that spots new innovative areas of research and drives their uptake across the NHS, and the repurposing of drugs. The panel asked if research into brain tumours was being considered for the AAR’s attention. Mr Hancock confirmed that while he didn’t know the answer, he would find out what work is taking place and report back to the Committee.

During the meeting, Mr Hancock confirmed that earlier diagnosis of brain tumours, indeed all cancers, is a Government priority as expressly stated in its Long Term Plan for the NHS. He also gave assurances that families who have lost loved ones to a brain tumour will be fully involved in helping progress the work of the Task and Finish Working Group and the Brain Cancer Mission thanks to the organisations involved in the process.

He ended the meeting praising the Committee and its role as a conduit between the Government and the public. At the close of the hour-long session, it was clear that the Petitions Committee report was, and continues to be, a catalyst for change. However, while promises and noble words were spoken, these must now be translated into action and those with influence must be held to account.

Through our role as secretariat of the All-Party Parliamentary Group on Brain Tumours and on the steering group of the Tessa Jowell Brain Cancer Mission, we will continue as guardians of the recommendations of the Petitions Committee report and of the subsequent Task and Finish Working Group report.

As a core element of the group we will make sure that the approach taken by The Tessa Jowell Brain Cancer Mission is one that builds long-term, sustainable infrastructure across areas of the research journey in order to improve the future of brain tumour research and outcomes for patients.

That is our job because we are your voice.

Together, with your voice, we will find a cure.

In February 2018 then Health Secretary Jeremy Hunt spoke of a “chance to create a genuine, step change in survival rates for one of the deadliest forms of cancer.”

We won’t let that chance slip away.

To stay up-to-date with our campaigning work, sign up to become a Brain Tumour Research Activist.