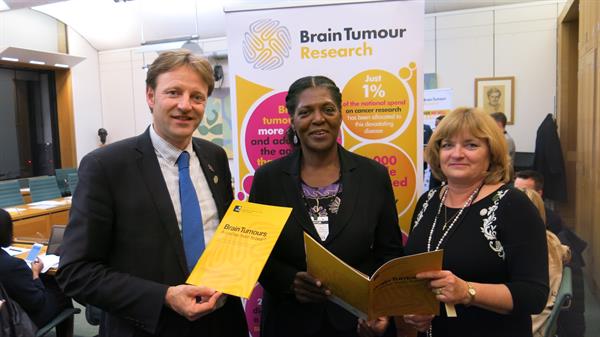 28 November 2018 by Nick Perkins
On Tuesday 20th November, the All-Party Parliamentary Group on Brain Tumours (APPGBT) launched its first-ever report Brain tumours – a cost too much to bear? to a packed room in the House of Commons.

The report outlines the findings of the APPGBT Inquiry into the economic and social impacts of a brain tumour diagnosis. There was a great deal of support within the room for the way the report shines a spotlight on many of the issues brain tumour patients and their families face and for the recommendations it makes to drive improvements.

Derek Thomas MP, Chair of the APPGBT, kicked off the meeting by introducing the report, explaining how the Inquiry underpinning Brain tumours – a cost too much to bear? was conducted and thanking everyone who contributed. He added that he felt the Inquiry had highlighted alarming gaps in support and had evidenced what needs to be addressed going forward.

For this meeting, the last of 2018, Derek Thomas MP was joined by a panel of six guest speakers, all of whom had a brain tumour connection either as a patient, loved one, or as a professional working in the field.

Although the meeting centered around a series of questions Derek Thomas MP asked panel members about the impact of their diagnosis and the changes they would like to see happen, he opened up the discussion to all guests in the room. As such, the meeting was dedicated to an open, incredibly informative conversation and sharing of experiences.

Topics discussed included Personal Independence Payments, the need for better psychological and practical support, how to improve services for young people, the different ways clinicians deliver a diagnosis, the slow progress of research into brain tumours, the financial impact on patients and immediate family, how a diagnosis can impact on a child’s education, and the need for better advanced planning in palliative care.

Throughout the meeting, Derek encouraged guests to contribute and add to the conversation so that the APPGBT could continue to learn about the true cost of brain tumours. As part of this discussion, Dr Julian Lewis MP read out a moving letter sent to him by a constituent, a brain tumour patient who was having difficulty accessing support and who was experiencing financial difficulties as a result of their diagnosis.

At different points in the discussion, Derek advised guests of his involvement in other Parliamentary groups and committees and how he would take forward some of the issues discussed through these channels. Nicky Morgan MP also advised guests of an Inquiry launched by the Treasury Select Committee, of which she is Chair, into access to financial services for vulnerable people and asked those in the room to supply evidence.

Before wrapping up the meeting, Sue Farrington Smith, Chief Executive of Brain Tumour Research, who provides the Secretariat for the APPGBT, updated guests on the future work of the APPGBT including taking forward the Inquiry report recommendations, monitoring the Tessa Jowell Brain Cancer Mission progress and examining drug discovery, innovation and trials within the brain tumour sector.

Thank you to everyone who contributed to the Inquiry, who wrote to their MP asking them to attend the APPGBT meeting, and to all who came along and contributed to what was an extremely insightful and thought-provoking event.